Two new works have been added to Vincent van Gogh's official oeuvre. The discovery of an unknown drawing by the Dutch painter has allowed the authentication of a second sketch. 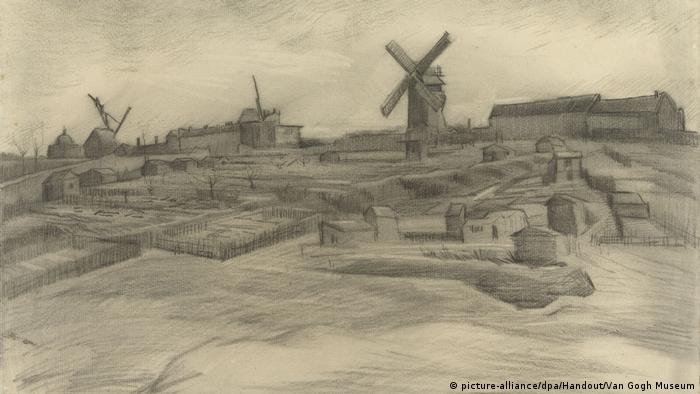 "This is fantastic; we can definitively add two drawings to Van Gogh's oeuvre," Axel Rüger, the director of the Van Gogh Museum, said on Tuesday, when the news was made public.

An analysis of the subject, style, technique, materials and provenance of a sketch entitled "The Hill of Montmartre with Stone Quarry" has allowed experts to determine that it was drawn by Dutch artist Vincent van Gogh (1853-1890). The drawing, which belongs to the collection of the Van Vlissingen Art Foundation, was once part of Vincent and Theo van Gogh's own collection and had disappeared from circulation in 1917.

The finding has allowed experts to authenticate a similar work in the Van Gogh Museum collection, known as "Montmartre Hill" (photo above), after it had been rejected a few years ago.

"The two drawings are obviously by the same hand, and in style related to the model drawings that Van Gogh made early in 1886, first in Antwerp and then in Paris at Cormon's studio," said Teio Meedendorp, researcher at the Van Gogh Museum.

The works, which both date from 1886, "illustrate a phase in the learning process of the artist, who eventually reinvented himself in Paris, but here still walked the traditional artistic path," Meedendorp added.

Read more: Van Gogh paintings snatched by mafia back in Amsterdam after 14 years

Van Gogh's known oeuvre includes over 900 paintings and five sketchbooks. More than half of his works are on show at the Van Gogh Museum in Amsterdam. The last time a new Van Gogh painting was discovered was in 2012.

The two sketches will be on show at the exhibition "Impressionism & Beyond. A Wonderful Journey" at the Singer Laren museum near Amsterdam from January 16 to May 6.

Italian police have recovered two stolen paintings by Dutch artist Vincent Van Gogh. The works, found in an anti-Mafia raid, were taken from a museum in Amsterdam in 2002. (30.09.2016)

Dutch painter Van Gogh completed his first sunflower painting in southern France. To this day, it is an inspiration to fashion designers and advertisers. (23.06.2016)

Twin painters Cikuru and Cito Cirimwami are telling the history of their country, painting Congolese politicians using ashes, sand, ribbons and garbage. They want more people to learn through their art.