Two pieces by the Dutch legend have been unveiled anew at the Van Gogh museum. They were found six months ago in the villa of a suspected Italian drug lord. 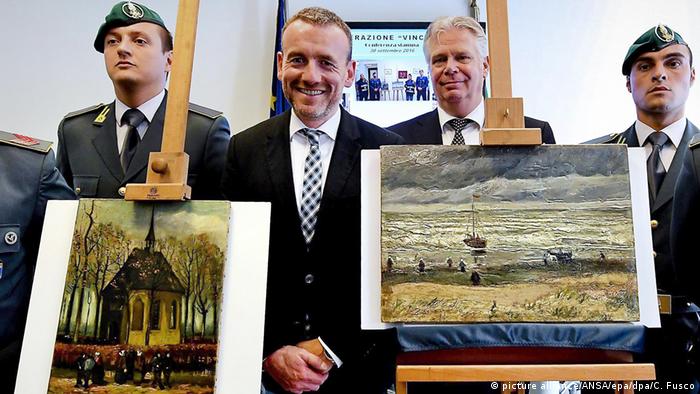 Two works by Dutch post-Impressionist Vincent Van Gogh have been returned to the Netherlands after they were grabbed in a mafia heist 14 years ago. The two paintings were unveiled on Tuesday at the Van Gogh museum in Amsterdam.

"They are back," said museum director Axel Rüger, "I never thought I'd be able to say those words."

In December 2002, thieves managed to enter the museum through its roof. Sliding in and out on a single rope, they succeeded in making off with the works in only four minutes. The paintings remained missing for fourteen years, until six months ago when Italian investigators found them behind a false wall in the villa of 41-year-old suspected drug lord Raffaele Imperiale.

Eleven of Imperiale's alleged drug ring were promptly arrested, including one who led police to the paintings. Italian officials have said they believe Imperiale has fled the Naples area for Dubai, where he runs a construction business.

The paintings were, luckily, barely damaged as Rueger showed the public on Tuesday. The seascape depicting a wave-tossed ship and the canvas illustrating the church in Brabant where Van Gogh's father worked as a minister were displayed, behind thick glass frames, for the first time in more than a decade.

"The children are safely returned now and they really are safe," the director said. "They will remain here for many generations to come."

Art experts are squabbling over whether a set of previously unpublished drawings are the work of Dutch artist Vincent Van Gogh. The Van Gogh Museum in Amsterdam says the sketches are complete fakes. (16.11.2016)

"What a fine sight an old working man makes," wrote Vincent van Gogh to his brother Theo about the subject of the newly discovered sketch. The previously unknown work is named "Study for 'Worn Out.'"

Organized crime in The Netherlands is flourishing in tandem with the cocaine trade. A key witness is shot dead, along with his lawyer. A journalist is murdered in downtown Amsterdam.