Amsterdam unveiled a national monument bearing the names of over 100,000 names of Dutch Jews, Sinti and Roma who were killed by the Nazis during the Holocaust. Each brick of the monument bears the name of a Dutch victim of the Holocaust, as well as their date of birth and age at the time of death

The Netherlands officially unveiled its first National Holocaust Memorial in Amsterdam on Sunday, after years of legal dispute over the monument's location.

The memorial is the first in the Netherlands to name all 102,000 Dutch Jews, Sinti and Roma who were deported or killed by the Nazis during World War II.

The monument — funded mainly through donations — is located near the near the Jewish Quarter in Amsterdam's city center.

'Giving victims their names back'

The official opening was celebrated by the local Jewish community, despite criticisms it came too late.

"This monument gives the victims back their names 76 years after the end of the war and proves that they lived."

The walls of the monument, designed by Polish-American architect Daniel Liebeskind, are shaped after four Hebrew letters meaning "in memory of."

They consist of 102,000 brick walls, each bearing the name of a victim.

The memorial was unveiled by King Willem-Alexander and Dutch Prime Minister Mark Rutte. 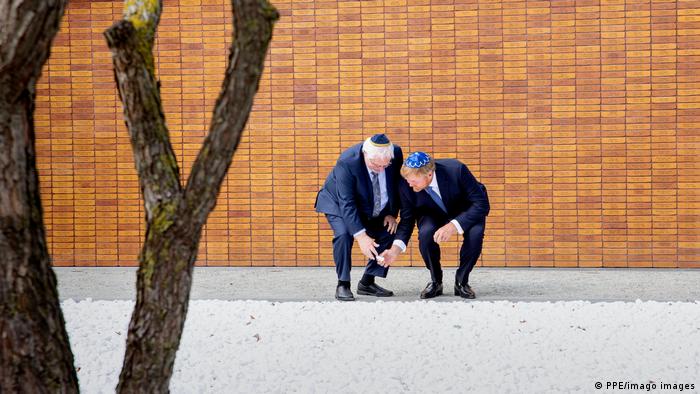 'Emergency decree' issued ahead of opening

According to Liebeskind's website, the idea was conceived in 2013. However, due to a long legal battle preceding the opening of the monument, construction didn't start until 2019.

The monument was initially slated for Wertheim Park, local outlet NL Times has said in earlier reports. However, the plan sparked protests from residents who feared an influx of visitors and tourists to the area and complained the construction was "too large."

The municipality then moved it to another area, which also drew backlash from residents fearing security incidents.

Finally in 2019, the country's highest court green-lighted the project, ruling that the significance of the monument outweighed objections of residents.

Fearing further protests, the city issued an emergency decree on Friday, two days ahead of the official opening.

Last year marked the first time an official in the Netherlands publicly apologized on behalf of the government for the war-time persecution of Jews, after Rutte admitted little was done to protect them from the atrocities committed by Nazi Germany.

This report was written in part with material from the Deutsche Presse Agentur (dpa).

Shaul Ladany - Running for his life