What do Ebola and terrorism have to do with turtles? Along the Kenyan coast, quite a bit. Both are causing numbers of tourists to drop - and the impacts on wildlife conservation could be severe. 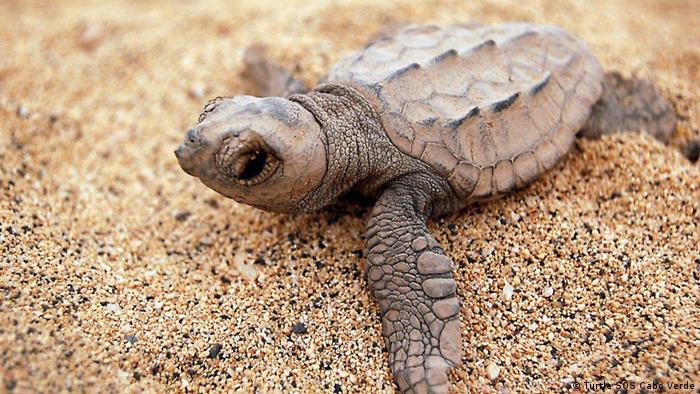 Sandy white beaches, turquoise water and exotic wildlife: The Kenyan coast along the Indian Ocean used to be one of the main tourist destinations in the region. Visitors have been coming for its cuisine, wildlife and outdoor activities - or to just hang out beneath a palm tree on one of the tranquil beaches. 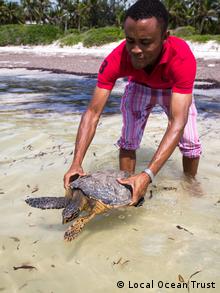 After being freed from a fishing net, this hawksbill turtle can start a new life

Those beaches are a paradise not only for tourists, but for turtles as well: Five of the world's seven species of sea turtle are found in Kenya. The IUCN Red List categorizes all seven species as endangered or critically endangered. In Kenya, which has weak governance, conservation of endangered species falls to local organizations.

The village of Watamu, 100 kilometers north of Mombasa, is a global hotspot for green turtles. A turtle watch program that has been running since 1997 sees 19 staff members monitor turtles' nests, rescue animals that have been caught in fishing nets, and raise awareness among locals.

Critical for these organizations to function are "eco-visitors" from abroad who volunteer not just time, but also donations. Yet over the past year, tourism along the coast virtually collapsed - which has made things a lot tougher for environmental projects like the Local Ocean Trust.

Fear of Ebola and al-Shabab have been repelling foreign visitors. The Ebola epidemic that started in March 2014 in West Africa and has killed almost 10,000 people till now has made many tourists rethink their travel plans - including avoiding East Africa, although that's quite far from the danger zone. 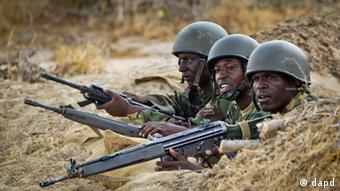 The Kenyan military has taken up the fight against al-Shabab

The jihadist terror group al-Shabab, which in 2013 claimed responsibility for the Westgate massacre in Nairobi, has in 2014 continued its attacks, killing more than 180 people. These too are far from Kenya's tranquil beaches, taking place mainly close to the Somali-Kenyan boarder.

By mid-2014, foreign governments had issued travel warnings due to the terrorist threat. The international reputation of the country suffered under fear of both Ebola and terrorism.

Susanne Stünckel, a spokesperson of the German travel agency TUI, told DW there has been a clear decline in bookings to Kenya since the attacks. "On the other hand, bookings to neighboring Tanzania have increased by 20 percent," she told DW.

In the Watamu region along the Kenyan, coast there are no signs of al-Shabab, or Ebola. Yet typical hotel occupancy rates of 10 to 20 percent are nonexistent, a hotel owner said. A local dive school owner points out that it would be more efficient to shut down business for now.

No turtles without tourists? 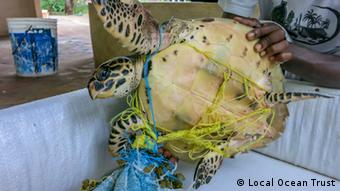 A case for the Local Ocean trust: This critically endangered hawksbill turtle was found entangled in a fishing net

The Local Ocean Trust has also been feeling the impact: While before up to 50 people used to visit the turtle rehabilitation center per day, this number is now just 60 per week.

But worse is the lack of eco-visitors, project manager and marine biologist Casper van de Geer said. "In six months, we had two or three people - whereas we should have had 30. We nearly went bankrupt," he told DW.

If the project does runs out of money, this will undoubtedly affect marine life in the area. Aside from rehabilitating injured turtles, the group also patrols nests on the beach, preventing them from being raided by people who consider turtle eggs a delicacy or even an aphrodisiac.

The program also tries to raise awareness in local communities and runs a bycatch release program: Fishermen who accidently catch a turtle in their net can ring hand over the turtle for monetary compensation. Through such activities, the trust estimates that it has already rescued more than 12,000 turtles along the Kenyan coast. 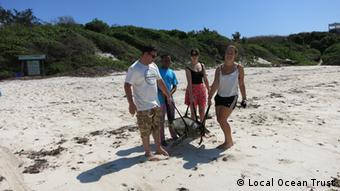 Drying up funds for wildlife conservation projects also causes, people who were previously employed tourism industry have to look for other jobs - including opportunistic fishing, Van de Geer said.

He sees a clear correlation between increasing numbers of unskilled fishermen and poached turtles. With a turtle on the black market fetching as much as 400 euros ($450), the incentive to start poaching are high, Van de Geer pointed out.

To prevent locals from going into unsustainable fishing instead of tourism, and in order for the conservation projects to run successfully on the long term, visitors will have to come back.

Locals point out security differences between differing regions in Kenya. The United Kingdom government still warns against travel to the very northern part of the coast, but not against the Watamu area or closest airports in Mombasa or Malindi. There been no sign of al-Shabab in the Watamu region. 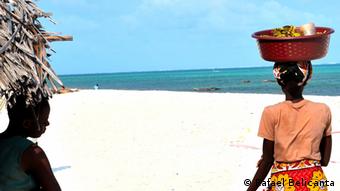 With its sandy white beaches and crystal-clear turquiose water, the Kenyan coast is ideal for tourism

Ebola is also absent: There hasn't been a single case in the whole country. "There is no risk of getting Ebola in Kenya, simply because there is no Ebola in Kenya," said Tarik Jasarevic of the World Health Organization. "We do not recommend any travel restrictions," he told DW.

So will this help tourism return? This week, for the first time in months, Casper van de Geer said he's been seeing a slight increase in requests from potential eco-visitors.

"Ebola is closer to Europe than it is to Kenya," van de Geer stated, stressing the geographical distance between Kenya and the Ebola-affected areas on the other side of the continent.

He does maintain hope that visitors will return soon. If they don't, the fear of Ebola might kill turtles there.

The invisible but vital imprint of turtles

My offspring will be born where I was. Scientists have long pondered the how of turtles who return to where they hatched to lay their own eggs. Now they appear to have solved the mystery. (29.01.2015)

The number of new cases of Ebola in West Africa reached new lows. However fear of the deadly virus continued to spread like wildfire. (30.01.2015)

An environmental organization in Kenya is using eco-tourism to finance training and research trips among nature for children. (18.03.2014)