China plans to impose an anti-dumping tax on some stainless steel imports from the European Union and three Asian countries. For the 28-nation bloc, the move is more than just a key export market for steel being at risk. 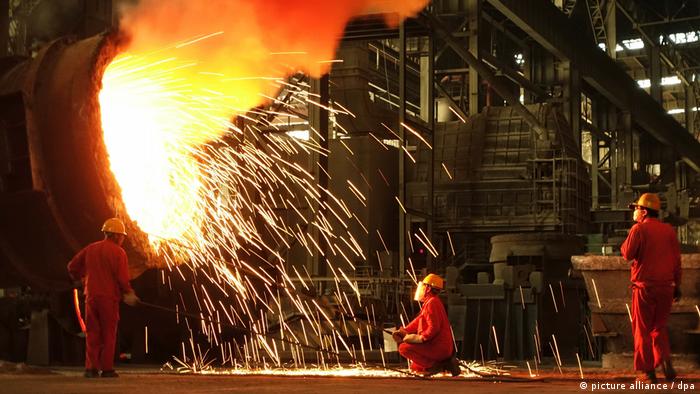 China said on Monday it will slap taxes to deter steel producers in the European Union, Japan, South Korea and Japan from "dumping" some of their stainless steel products in the country.

Beijing will impose anti-dumping duties of 18.1% to 103.1% on stainless steel billets and hot-rolled stainless steel plates imported from the EU and the others, effective July 23, China's Ministry of Commerce said in a statement.

The decision came after a probe by Chinese regulators showed that "there was dumping of the investigated products and it has caused substantive damage to the industry in China," the ministry said.

The Chinese move is a twin blow for the EU steel producers, who are already suffering from global overcapacity, mainly attributed to Beijing's inability to cut production despite several assurances. China is by far the world's biggest steel producer accounting for more than half the global output.

"This move is only one of a series of protectionist measures we're seeing popping up around the world," Charles de Lusignan, a spokesman for Eurofer — the European Steel Association — told DW.

"So not only is an export market for EU steel at risk — the EU has been a reliable, long-term supplier of stainless steel to the Chinese market — it is that we risk deflection of otherwise China-bound stainless steels from Indonesia, Japan and South Korea, all of which are already major steel exporters to the EU," he said.

European steel producers are already reeling from diversion of steel to the EU triggered by the US tariffs on steel imports introduced last year by the Trump administration.

The latest anti-dumping duties announced by China come a year after state-owned Shanxi Taigang Stainless Steel complained that low-cost stainless steel products imported from the EU and the three Asian countries were damaging the local industry.

The complaint targeted eight foreign producers and several Chinese companies, including the Indonesian unit of one of the world's top producers, Tsingshan Stainless Steel.

Indonesian producers were particularly under the scanner. The Southeast Asian country accounted for almost 60% of China's stainless steel imports in 2018, up from zero in 2015.

China said on Monday it will impose a 20% anti-dumping duty on Indonesian stainless steel imports, which jumped to 1.1 million tons in 2018 from 420,000 tons a year earlier.

"This would put additional pressure on the EU producers since the material has to be placed somewhere and it would be indeed diverted to the remaining open EU market," de Lusignan said.

The EU exported just 40,000 tons of stainless steel billets and hot-rolled stainless steel plates to China in 2018, a small fraction of the nearly 1.5 million tons of those products imported by the Asian country.

The dispute over proposed steel and aluminum tariffs had its roots in there being a glut of such metals on global markets. Although China was identified as a major culprit, the US applied its levies more widely. (30.04.2018)