European Council President Donald Tusk has warned EU leaders to "prepare for the worst" in EU-US relations ahead of the EU summit in Brussels this week. Curbing migration and economics is all on the agenda. 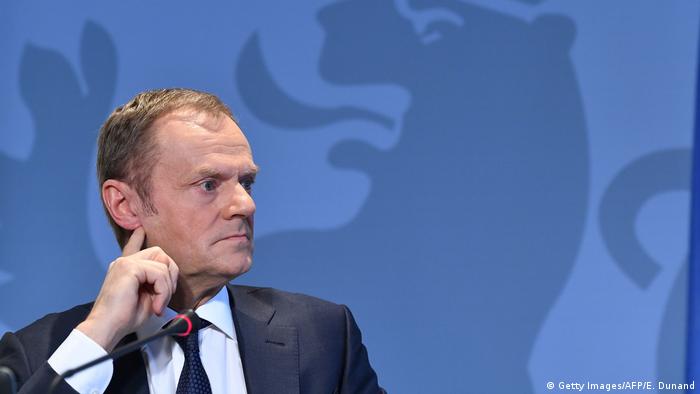 European Council President Donald Tusk has warned European Union leaders that they should "prepare for the worst" in EU-US relations. In a letter to EU leaders, who will be gathering in Brussels for a summit on Thursday and Friday, he also laid out the agenda for discussions at the important meeting, with migration topping the list.

Writing on the issue of trans-Atlantic relations, Tusk said US President Donald Trump's policies have been increasingly at loggerheads with the bloc's values.

"It is my belief that, while hoping for the best, we must be ready to prepare our union for worst-case scenarios," Tusk wrote. "Despite our tireless efforts to keep the unity of the West, trans-Atlantic relations are under immense pressure due to the policies of President Trump."

Trump has withdrawn the US from the Paris climate agreement and Iran nuclear deal, despite repeated pleas by the EU to stick with them. Then in June, citing "national security" the Trump administration set off fears of a trade war by imposing tariffs on EU steel and aluminum. The EU responded with a set of retaliatory tariffs.

One EU official, who spoke on the condition of anonymity, told DPA news agency that such "negative" decisions were starting to "look like a pattern" where the US has "no friends, no enemies" and where preserving the international rules-based structure was not a focus.

NATO Secretary-General Jens Stoltenberg will share his views on EU-NATO cooperation at the meeting.

With Italy, Malta and other countries reluctant to accept more refugees, Tusk's letter largely focused on figuring out how to curb the flow of migrants to the EU. He called for the European Council to endorse three key points:

Economic and monetary union on the agenda

Tusk also touched on the topic of the reform of the economic and monetary union. "As agreed in December, my intention is to take the first decisions about completing the Banking Union and strengthening the European Stability Mechanism."

On Friday, EU leaders will hear how Brexit negotiations are coming along.

Some EU leaders are attending a mini-summit in Brussels. They'll discuss differing approaches to how the bloc can deal with a sustained stream of migrants and refugees seeking a new life in Europe. (24.06.2018)

Trump's tariffs: When does a trade spat become an actual trade war?

Despite reciprocal tariffs being imposed by the US, China and the EU, many economists think there is still only the threat of an all-out trade war. So what happens if tensions escalate further? (27.06.2018)