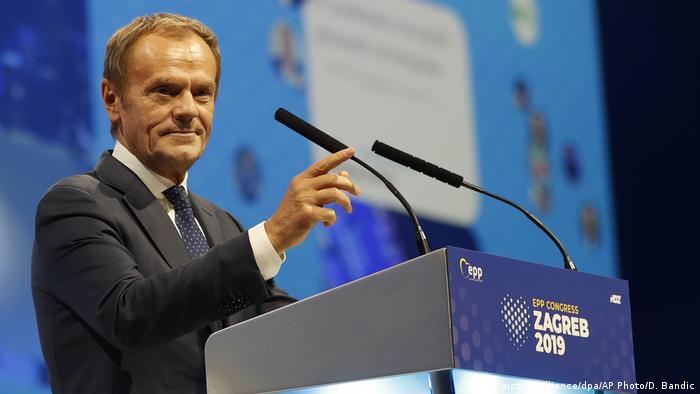 The center-right EPP is the largest bloc within the EU Parliament.

In his first remarks after being elected, the Polish lawmaker vowed to fight "populists, manipulators and autocrats."

"We will not sacrifice values like civic liberties, the rule of law, and decency in a public life on the altar of security and order, because there is simply no need,'' he added.

The remarks, made at a congress in Zagreb, Croatia, may have been an attack on Hungarian Prime Minister Victor Orban's party Fidesz, which was suspended from the bloc earlier in the year. Fidesz were not invited to participate in the congress after initiating an anti-Brussels poster campaign.

"Someone also worked hard, putting up a fence and billboards with anti-migration propaganda," Tusk said in an apparent allusion to Orban.

"I'm ready to fight and I hope you are ready too," he told assembled members.

What does the new role mean?

The EPP is made up of over 70 parties from different EU nations and holds 182 of the 751 European Parliament seats. German Chancellor Angela Merkel's CDU party and French Republicans are members, as is incoming European Commissioner Ursula von der Leyen.

Tusk replaces Frenchman Joseph Daul and was elected unopposed by 491 votes to 37. Tusk will now lead the bloc in the EU Parliament.

Read more: Poland votes: PiS and its pact with the people

The new position is the latest step in an illustrious career for the 62-year-old Pole. The former prime minister of Poland and European Council president had been tapped this year as a potential candidate for president of the country.