Tusk: Too much 'baggage' for Polish presidential run

Outgoing European Council President Donald Tusk says he will not run for president of his native Poland in 2020. The decision leaves it unclear who will run against right-wing incumbent Andrzej Duda in the spring. 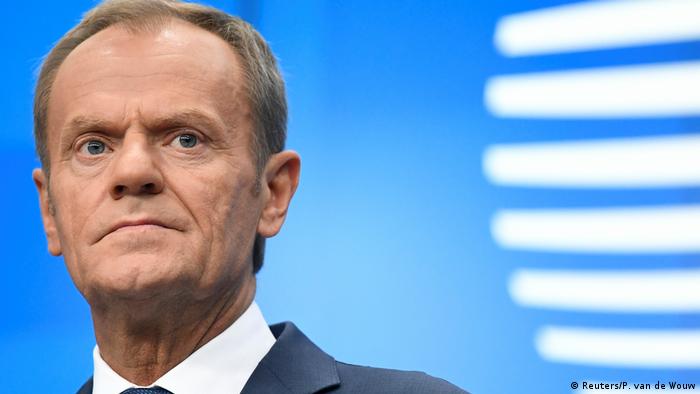 On Tuesday, top EU figure Donald Tusk announced his decision not to run in the Polish presidential election next year once his tenure as European Council president ends this month.

In a televised statement to reporters in Brussels, he said, "I think we can win these elections, but you need a candidate free from the baggage of unpopular decisions, and I am burdened with such baggage."

Tusk served as prime minister in Poland from 2007 to 2014 as head of the centrist, pro-EU Civic Platform party before losing general elections to the nationalist Law and Justice (PiS) party.

During his years as prime minister, Poland experienced steady economic growth and an increased profile on the international stage, developments that later helped earn Tusk his position at the EU.

But his government also experienced setbacks. Scandals involving members of this government arose and under Tusk's leadership Poland raised the retirement age, an unpopular move that has since been reversed.

A drift to the right

The Tuesday announcement ends months of speculation and means it is currently unclear who will run against incumbent Andrzej Duda in the spring election. Some had hoped that a Tusk candidacy could stop the country from drifting further to the right.

Under Duda's leadership, Poland has experienced developments that many have called anti-democratic. Duda and his PiS party are strongly critical of Tusk and the state-run media programs controlled by the party have covered him negatively in the past.

In October parliamentary elections, PiS won overall but lost its majority in the upper house of parliament. October polls showed Duda winning 44% of the vote in the presidential election and the opposition's strongest candidate pulling in 25%. A candidate needs at least 50% of the vote to win outright, so such an outcome would lead to a second run-off election between the two strongest candidates.