President Trump’s support for a congressional plan that would slash legal immigration to the US can be seen mostly as a politically shrewd move to play to his supporters, because the bill is unlikely to become law. 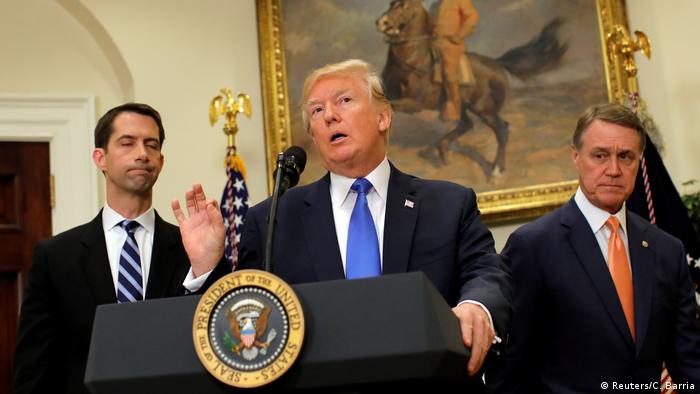 While Trump apparently enjoys support from many rank-and-file lawmakers, some prominent party loyalists have already naysayed the plan

If one had to name Republican presidential candidate Donald Trump's key campaign issue, it would have to be immigration. His repeated promises to get tough on illegal immigration and build a wall along the US-Mexico border helped him not only defeat his rivals for the Republican nomination, but then also win the White House.

So it is largely unsurprising that since taking office, President Trump has tried to make good in his promise, albeit with mixed success. His border wall pledge and his attempted travel ban for nationals from several predominantly Muslim countries have hit roadblocks aplenty in Congress and the courts.

But the president's tough talk about and his government's crackdown on undocumented immigrants has caused anxiety among those already in the country. And, according to official data, it has also led to a drastic reduction of illegal border crossings since Trump took office.

Shore up the base

When times are tough for the president - and most outside observers would certainly agree that the last two weeks have been anything but smooth - he tends to try to shore up his support. He has done this repeatedly by holding what have can be described as campaign-style rallies in places where he fared well in the election. Another way to shore up support from his voters when times are difficult is to show he has not forgotten his key campaign promise: immigration.

So at the White House on Wednesday, President Trump, flanked by two Republican senators who had sponsored a bill that would halve the number of legal immigrants and move to merit-based immigration system, said he supported the so-called RAISE Act. While Trump had previously focused his rhetoric mainly on illegal immigration, this new effort targets legal immigration.

"The RAISE Act ends chain migration and replaces our low-skilled system with a new points-based system," Trump said. The goal of the measure, he added, was to reduce the number of low-skilled immigrants which according to the president had displaced US workers and led to depressed wages. "The competitive application process will favor applicants who can speak English,” said Trump, as well as those who can support themselves and their families.

The bill, according to the White House, would also eliminate "the outdated Diversity Visa lottery system, which serves questionable economic and humanitarian interests” and limit "permanent resident status for refugees to 50,000 a year.” The measure would also curb family-based migration, currently the key path for legal immigration to the US.

Over ten years the RAISE Act would cut legal immigration aimed at getting permanent residency status or a so-called green card to the United States by 50 percent.

But the chances that this bill will ever become law are "very slim”, Steven Yale-Loehr, one of the country's preeminent experts on immigration law told DW. "I predict that in the end, Congress will be unable to pass a comprehensive immigration reform bill this year or next.”

"I think it goes into the exact wrong direction in terms of trying to address the immigration challenges that we do have in front of us and I think that Republicans and Democrats alike will see that this is a move in the wrong direction and will not allow the bill to go forward”, said Denise Gilman, director of the immigration clinic at the University of Texas.

Thinking that immigration reform would be easier to pass after the Republican-dominated Congress has failed so far to pass health care legislation would be misguided, noted Yale-Loehr.

"Immigration reform is just as complex and controversial as health care and tax reform”, he said. "Congress has tried and failed several times over the last decade to fix our broken immigration system. Any bill needs bipartisan consensus to be enacted. This bill fails that requirement.”

In fact, the bill now supported by President Trump fails to even get full Republican support.

Lindsey Graham, an influential longtime senator from South Carolina who has previously worked on bipartisan immigration reform, said that while he supported a merit-based immigration system in principle, he rejected this bill as it "would reduce legal immigration by half, including many immigrants who work legally in our agriculture, tourism and service industries.”

"South Carolina's number one industry is agriculture, and tourism is number two. If this proposal were to become law, it would be devastating to our state's economy, which relies on this immigrant workforce," added Graham.

A professor of immigration law at Cornell University, Yale-Loehr co-wrote the leading 21-volume treatise on the issue. He agrees with Graham that this bill would not serve the country's overall interest as it would cut workers that help, not hurt, key sectors of the US economy such as agriculture and tourism.

Embarrassment to US tradition

But Yale-Loehr also rejects the RAISE Act because he thinks it is too simplistic in its view of economic immigrants. "It assumes that we only select immigrants to work. But economic immigrants bring their families, and people who immigrate based on family connections work after they come to the United States”, he said. "We need an immigration system that works for everyone.”

For Texas University's Gilman, the bill would upend the traditional role of the US as an immigration country. "I think it would be an embarrassment to the tradition of the United States in relation to immigration”, she said. "It would strictly limit family-based immigration which would mean that the values of a family unity and uniting and integrating families would be altogether undercut and it is also out of sync with the actual needs of the economy for driving the economic engine."

The last major effort to reform immigration in the US failed in 2013, when after years of difficult debate, the US Senate passed a bipartisan immigration bill that then died in the House of Representatives.

With President Trump now officially behind the RAISE Act, won't it hurt him politically if the effort ultimately falters, as many observers expect?

Not likely, said Cornell's Yale-Loehr, arguing that Trump's call to limit immigration "is easy and scores points with his political base. If he can't actually achieve that achieve that goal, he can just blame Congress.”