President Donald Trump and his Republican Party have unveiled their plans to reform the US tax code. The proposed bill would slash the corporate rate from 35 to 20 percent and encourage companies to repatriate profits. 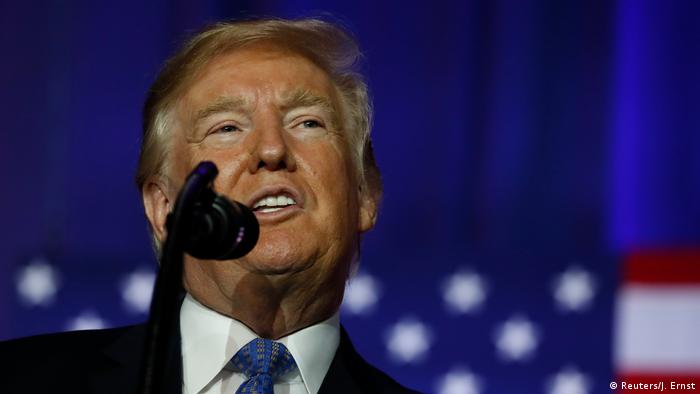 Long-awaited plans tosweepingly reform the US tax code, unveiled by President's Donald Trump's Republican Party on Wednesday, was met with a buoyant mood on Wall Street, with financial and technology shares among the biggest gainers.

After seeing his efforts to reform the US' health care system fizzle out, optimism surrounding the Republicans' tax reform package could see Trump salvage at least parts of his agenda.

While slashing the corporate tax rate down to 20 percent, the new bill will see the number of household tax brackets cut down from seven to just three, with a maximum rate of 35 percent. However, the plan states that there could also be a "potential" fourth tier for the highest-income taxpayers.

Read more: Trump to unveil biggest US corporate tax cut of all time

The plan also aims to encourage companies to bring back profits accumulated abroad by offering a one-time, low tax rate on wealth repatriated from overseas. Inheritance tax, meanwhile, would be scrapped altogether.

Trump told supporters in Indianapolis Wednesday that cutting corporate taxes "is a revolutionary change, and the biggest winners will be middle class workers as jobs start pouring into our country, as companies start competing for American labor, and as wages continue to grow."

Trump decried current tax arrangements as a "relic" that impeded US economic growth. The Republicans' proposed overhaul amounted to the "the largest tax cut, essentially, in the history of our country," he said.

Unveiling the plan back in Washington DC, the House Speaker Paul Ryan framed it as a "once-in-a-lifetime opportunity that is all about more jobs, fairer taxes and bigger pay checks for American families."

Overhauling the US tax code has long been the political Holy Grail for the GOP and was a major pledge during the Trump campaign. That pledge has become all the more significant now, after the president tried and failed to get rid of the Affordable Care Act and construct a wall on the border with Mexico.

However, Trump will need to convince enough Democrats in Congress to back his reform plans if they are to come to fruition. Democratic Senator for Indiana Joe Donnelly faces re-election next year and was singled out by Trump from the stage on Wednesday. "If Senator Donnelly doesn't approve it - because you know he's on the other side - we will come here and we will campaign against him like you wouldn't believe," Trump said.

The president has also made overtures to Democratic senators like Claire McCaskill of Missouri and Heidi Heitkamp of North Dakota, who, along with Donnelly, all face re-election.

Crucially, the Republican reform offered little substance on how the government would finance the tax cuts, to the ire of Democratic leaders.

Senate minority leader Chuck Schumer said that, while Trump "talked the talk" on tax reform by claiming his bill would benefit the middle class, "he ain't walking the walk."

"This is aimed at the wealthiest people in America - they do far and away the best" under the proposal, said Schumer, adding that abolishing inheritance tax would balloon the federal deficit and award a $269 billion tax break to the richest 0.02 percent of Americans.

The proposal "will add anywhere from $5 to $7 trillion to our deficit," he said.

Trump's tax reform efforts were met with optimism by Wall Street, however, with shares rallying almost across the board. The broad-based S&P 500 and tech-rich Nasdaq indices almost hit record heights before narrowly coming up short in the end.

"The question becomes, how are you going to pay for it?" Krosby said, echoing Democratic concerns, before adding that some of the more fiscally conservative Republican lawmakers may refuse to back it.