Donald Trump owes hundreds of millions to Deutsche Bank in connection with past real estate deals. Some politicians who are not fans of the president are blowing smoke hoping people will think there's a fire. 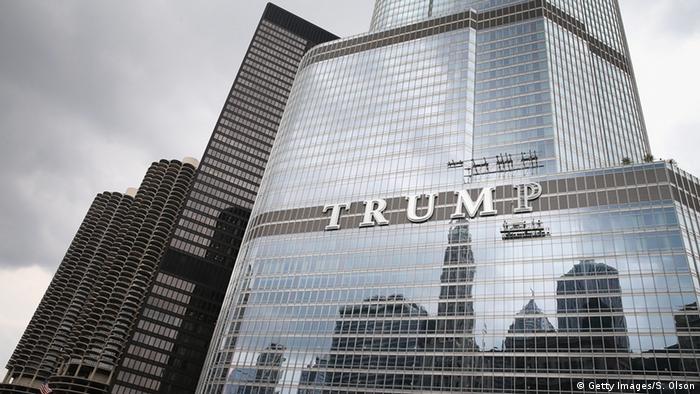 For many years, Deutsche Bank has been among the largest lenders to the real estate empire of Donald Trump. Now that Trump is US president, this relationship has been generating scrutiny - in part because Deutsche has a number of outstanding regulatory issues to resolve with the US federal government.

One of those issues is a Department of Justice investigation into the bank's role in a Russian "mirror-trading" scheme that allowed some Russian oligarchs to trade rubles for dollars and thereby funnel money out of Russia. This was a money-laundering scheme designed, in part, to allow oligarchs with close ties to the Kremlin to dodge sanctions imposed on them by the US in the wake of the 2014 Ukraine crisis.

This investigation has nothing to do with Trump - he is not alleged to have had any role in the activities being investigated - but the fact that he is president means that any decisions taken by US federal regulators about Deutsche will provoke questions about conflicts of interest, according to Norman Eisen, who was ethics counsellor in the Obama White House, in a recent interview with the Financial Times (FT). 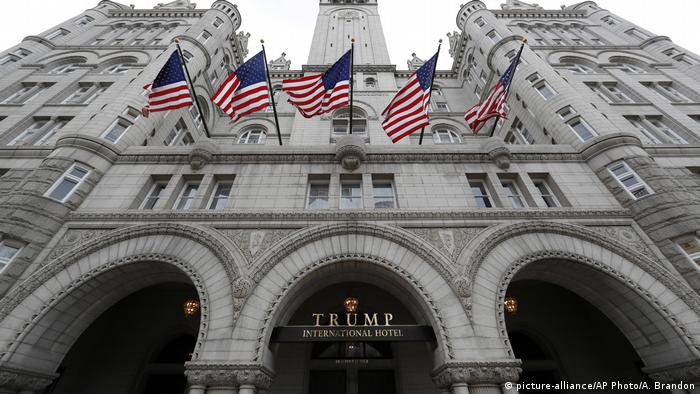 "Whether it's the investigation, the regulatory climate [or] a hundred other ways that Deutsche Bank is affected by the federal government, if they have this leverage over Donald Trump now, having seen how he operates, I think it's entirely legitimate to question whether he'll be even-handed," Eisen told FT.

One might note that it's also legitimate to question whether a former official in the Obama White House like Eisen will be even-handed in commenting on Donald Trump's business affairs. Moreover, the Justice Department is headed by Attorney General Jeff Sessions, not by Donald Trump, so any top-level guidance on how the department should approach its Deutsche Bank file would therefore come from Sessions.

However, Sessions has already come under fire from Trump for what the president sees as Sessions' insufficient loyalty. This has generated Beltway speculation that if Trump were to quietly ask Sessions to go easy on Deutsche, Sessions would have an incentive to go along, in order to avoid further stoking the ire of his mercurial boss.

According to documents called Financial Disclosure Reports submitted by Trump to the US Office of Government Ethics, which published the documents in June, Trump owns assets worth billions of dollars within a portfolio of 565 companies. He also had substantial debts - totaling at least $315 million (266 million euros) - in connection with several real estate projects. Most of that money was owed to Deutsche Bank.

According to FT's article, "Deutsche declined to comment on legal matters, the structuring of its loans, the nature of the guarantees or its relationship with Mr Trump. Spokespeople for the Trump Organization did not respond to emails." 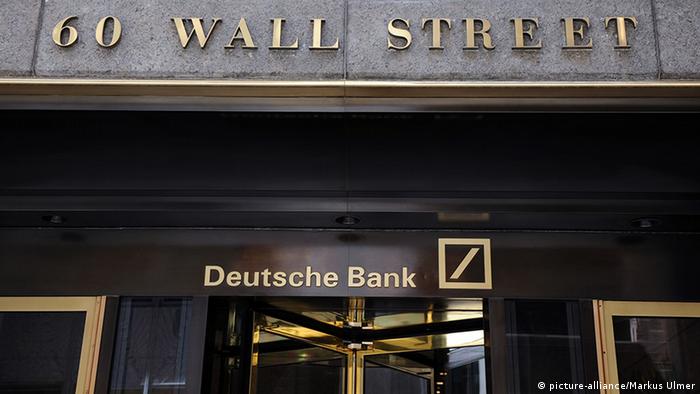 The entrance to Deutsche Bank's New York offices on Wall Street. The bank has been the go-to banker for Donald Trump's real estate business since the mid-1990s

However, FT was able to interview other people who had familiarity with the long-standing relationship between Trump and Deutsche Bank.

A match made in developer heaven

According to FT, when Trump was looking for money to finance his real estate ventures in the mid-1990s, he "found a good match in Deutsche," because the bank wanted to grow in the US and saw a niche in lending to rich developers who had "hit a few bumps along the way," such as Harry Macklowe, Ian Bruce Eichner and Donald Trump. 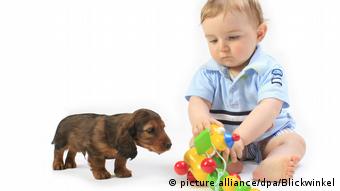 A dachshund puppy and a baby play with toys. What does this have to do with Donald Trump's real estate business? It's unclear. Could it be a Russian baby? No one knows. Could an investigation show some links?

Deutsche Bank is one of the world's biggest banks, with nearly 100,000 employees world-wide. Since 1990, it has had a substantial presence in the UK and US, in part because of its 1989 takeover of London-based investment bank Morgan, Grenfell & Co. and its 1999 takeover of New York-based Bankers Trust.

FT identified some of the New York-based Deutsche bankers who had important relationships with Trump over the years as Jon Vaccaro, who joined Deutsche from Citibank in 1997; Mike Offit and Steve Stuart, who joined from Goldman Sachs; and Eric Schwartz, who joined from Moody's, and became Trump's primary contact person at Deutsche for several years.

Some of the financing deals the Trump organization made with Deutsche are still active. There is a loan connected to the Old Post Office building in Washington, D.C., and another on a Chicago hotel tower (pictured at top), both due for repayment in 2024. And there's a $50 million mortgage on the Doral golf resort in Miami, due in 2023.

The dark art of insinuation

Maxine Waters, a Democratic Party congresswoman from Los Angeles, is determined to make Trump's relationship with Deutsche Bank a political issue. As the ranking Democratic member of the House Financial Services Committee, in a letter to Deutsche Bank in May, she called for Deutsche to turn over financial records relating to Trump, his close family members and business associates, so that the committee can examine them for possible links between Moscow and Trump's businesses.

This has nothing to do with the separate investigation of Russian oligarchs' mirror trades via Deutsche, cited above. Instead, it's connected to the steady drumbeat of allegations by US politicians opposed to Trump that the Kremlin "interfered with the US presidential election" in unspecified ways, in order to increase the likelihood of the real estate mogul being elected.

Deutsche has refused to supply its clients' financial records, saying it must respect "laws and internal policies designed to protect confidential customer information." 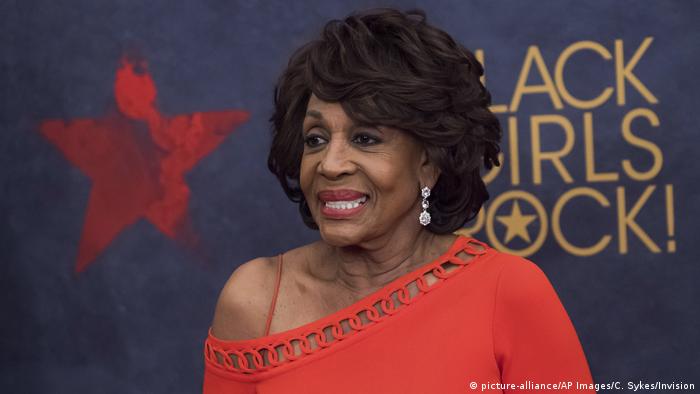 US Democratic congresswoman Maxine Waters of Los Angeles wants Deutsche Bank to turn over documents relating to its loans with Donald Trump, his family and associates, in hopes of finding something that might somehow be connected to Russia

This week's FT article, entitled "Donald Trump's debt to Deutsche Bank," makes no allegations of wrong-doing in connection with any of Deutsche's loans to Trump or his companies. Nor does Congresswoman Waters' letter to Deutsche Bank - at least, not directly.

However, in politics, perception often trumps substance. By issuing calls for any Russia-related documents to be released by Trump's bankers, Waters and other opponents of Trump may be seeking to awaken an impression that Trump's dealings with Deutsche Bank may have involved some impropriety.

Generating this impression may be made easier by the fact that Deutsche Bank - like many other major banks in the US and Europe - has had a long series of scandals connected to illegal financial dealings over the past two decades, for which it has had to make payments of billions of dollars to regulators, and suffered well-deserved reputational damage.

Waters' letter to Deutsche Bank, which was co-signed by four other members of the House Financial Services Committee, puts it this way: "Deutsche Bank's pattern of involvement in money laundering schemes with primarily Russian participation, its unconventional relationship with the president, and its repeated violations of US banking laws, all raise serious questions about whether the bank's reported reviews of the trading scheme and Trump's financial ties to Russia were completely thorough."