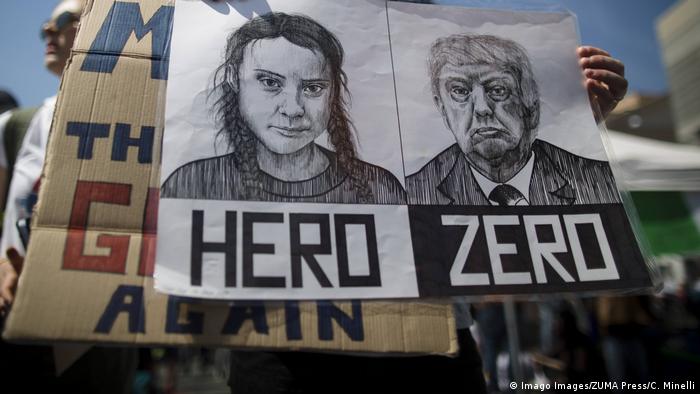 Teenage climate activist Greta Thunberg returns to the Swiss ski resort of Davos for the 2020 World Economic Forum with a strong and clear message: put an end to the fossil fuel "madness."

Thunberg's missive is aimed at, among others, US President Donald Trump, who in the past has mocked the Swedish environmental campaigner, saying she has an "anger management problem." Trump, who is among the most prominent climate change skeptics, is returning to Davos after giving it a miss in 2019 due to a government shutdown.

It's the first time Trump and Thunberg would be present at the same event since last year's United Nations climate change summit in New York, where the teenager could be seen staring down the US president as the two briefly crossed paths.

Later, Thunberg — named Time magazine's Person of the Year 2019 — told the BBC that she "wouldn't have wasted [her] time" talking to Trump about the climate crisis at the UN event.

"Honestly, I don't think I would have said anything because obviously he's not listening to scientists and experts, so why would he listen to me," she said.

Thunberg, who famously told Davos participants last year that "our house is on fire," has, however, found support among the organizers of the World Economic Forum, including its 81-year-old founder Klaus Schwab, who said the world is facing "a state of emergency."

"We do not want to reach the tipping point of irreversibility on climate change," Schwab told reporters on Tuesday. "We do not want the next generations to inherit a world, which becomes ever more hostile and ever less habitable — just think of the wildfires in Australia," he said.

An annual risks survey published by the WEF on Wednesday put climate and other environmental threats ahead of risks posed by geopolitical tensions and cyberattacks. It's the first time that the survey found the top five long-term risks were all environmental, from extreme weather events to businesses and governments failing to mitigate and adapt to climate change.

Sustainability is the main theme at this year's Davos meeting, taking place at a time the world is grappling with global warming becoming worse because of growing divisions among nations and businesses on how to tackle it.

The meeting, which will see over 50 heads of state and government, including German Chancellor Angela Merkel and Italian Prime Minister Giuseppe Conte, descend on the Alpine resort, seeks to give concrete meaning to "stakeholder capitalism" — a concept that businesses should serve the interests of all society rather than simply their shareholders.

"Business has now to fully embrace stakeholder capitalism, which means not only maximizing profits, but use their capabilities and resources in cooperation with governments and civil society to address the key issues of this decade," Schwab said. "They have to actively contribute to a more cohesive and sustainable world."

The annual jamboree — which is marking its golden jubilee this year — has often been criticized for its own carbon footprint, mainly left behind by leaders flying in their private jets.

The WEF, on its part, is touting that this year's meet would be among the most sustainable international summits ever held. It promises to buy carbon credits to offset flights, line up more electric vehicles and offer locally-sourced food.

"It is something we take very seriously,'' Adrian Monck, the WEF's managing director, told reporters. "There is nothing worse than an organization identifying a risk and doing nothing about it."

The WEF plans to launch a scheme using public and private funds to plant 1 trillion trees by the end of this decade.

The summit that runs from Tuesday to Friday this week would also focus on issues such as global trade wars, inequality, record debt levels and geopolitical tensions in the Middle East.

While key leaders from Iraq, the Palestinian Authority, Pakistan and Afghanistan are expected to attend the event, Iranian Foreign Minister Mohamad Javad Zarif will not be present as Tehran deals with protests following the downing of a Ukrainian passenger jet.

Zarif's cancelation also comes against the backdrop of rising tensions in the Middle East since US air strikes killed Qassem Soleimani, a top Iranian general, earlier in the month.

As leaders like Donald Trump and Jair Bolsonaro call global warming a hoax, a new study shows the link between climate change denial and nationalism. DW spoke to its author, Martin Hultman. (19.12.2018)

In a world striving for more sustainability, social entrepreneurship is increasingly recognized or supported by institutions like the Ashoka Foundation or the Schwab Foundation, says DW's Manuela Kasper-Claridge. (01.10.2019)