G7 leaders are struggling to even come up with a joint statement on trade. A breakthrough won't be able to paper over deep differences between the US and its allies. 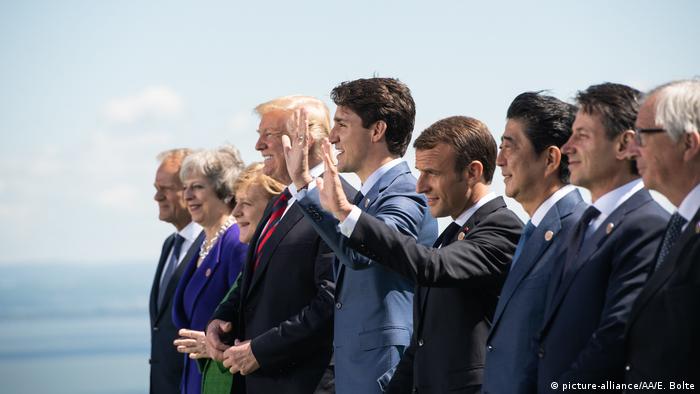 Leaders of the G7 nations struggled to close a widening chasm on Friday, which was triggered by US President Donald Trump's thrashing of global trade rules and differences in the Western alliance over climate change and the Iran nuclear deal.

The US president said "a lot of progress" had been made on the first day of the two-day G7 summit, even as summit host Canada labeled a recent Trump decision to impose steel and aluminum tariffs on its allies "illegal."

The Trump administration's decision to impose tariffs on steel and aluminum from Canada, the EU and Mexico due to "national security" concerns has enraged US allies and threatens to unleash a trade war.

France's president, Emmanuel Macron, sought to put on an optimistic face after meeting twice with Trump for a "very open and direct discussion," saying on the issue of trade that "there is a critical path, there is a way to progress altogether."

The scale of the crisis between the United States and the other G7 members was highlighted early, when, in off-the-cuff remarks, Trump suggested Russia be allowed to rejoin the elite club of rich nations after it was expelled from the G8 following Moscow's annexation of Crimea.

The suggestion from Trump appeared to be an unnecessary early distraction from a host of other pressing issues pulling Washington and Western allies apart.

Russia rejoining Canada, the United States, Japan, Britain, Italy, France and Germany in the group of rich nations wasn't even on the agenda, as European members of the G7 agreed that conditions were not ripe for Russia to be readmitted as long as the Ukraine crisis was not resolved.

Donald Tusk, who, as president of the European Council, is representing the EU at the summit, said the Trump administration and the rest of the group have clear differences on trade, climate change and the Iran nuclear deal.

Tusk warned that "the rules-based international order is being challenged, quite surprisingly not by the usual suspects but by its main architect and guarantor, the US."

He added that Trump's arm-twisting over trade and diplomacy with America's allies "would only play into the hands of those who seek a new post-West order where liberal democracy and fundamental freedoms would cease to exist."

As if to underscore the point, Chinese President Xi Jinping welcomed Russian leader Vladimir Putin to Beijing on Friday, with both men hailing the importance of strategic cooperation. 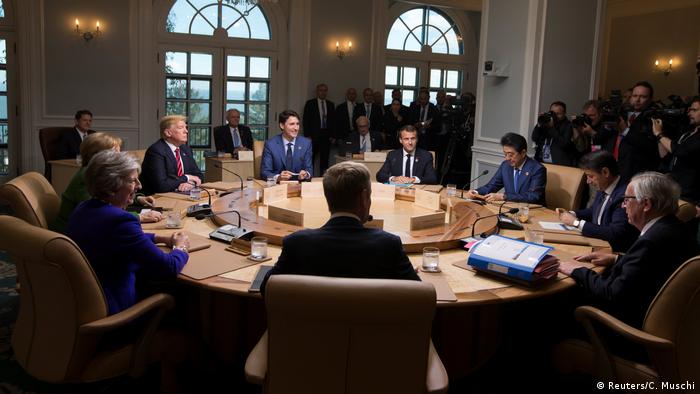 As the G7 summit kicked off, leaders struggled to make progress on contentious trade issues

Highlighting the scale of the differences between Western allies, for the first time in G7 history there were doubts about whether the summit would end with a final joint communique.

Macron said ahead of the summit that US allies would not be intimidated, signaling that the other six countries at the G7 meeting would be willing to sign a final declaration without Trump.

"The American President may not mind being isolated," Macron wrote on Twitter, "but neither do we mind signing a six country agreement if need be."

Trump said he hoped a final summit communique would be agreed, although it was clear that any joint statement would be unable to paper over significant differences between the US and the other G7 members.

Trump was the last leader to arrive at the summit and is expected to be the first to leave on Saturday, as he prepares for a meeting with North Korean dictator Kim Jong Un in Singapore on June 12.

Donald Trump is not very popular in Canada nor in the country's French-speaking province Quebec. So with the US president there for the G7 meeting, why are there no large protests against him? (09.06.2018)

Two former advisors from within the Canadian and US administrations have warned of the economic threat posed by US President Donald Trump ahead of the G7 summit in Canada, which kicks off today. (08.06.2018)