Donald Trump calls for barrier-free trade within the G7

Despite imposing tariffs on major US allies, the anti-globalist president has called for free trade within the G7. He also insisted US allies would be forced to concede to US trade terms because the US "can't lose." 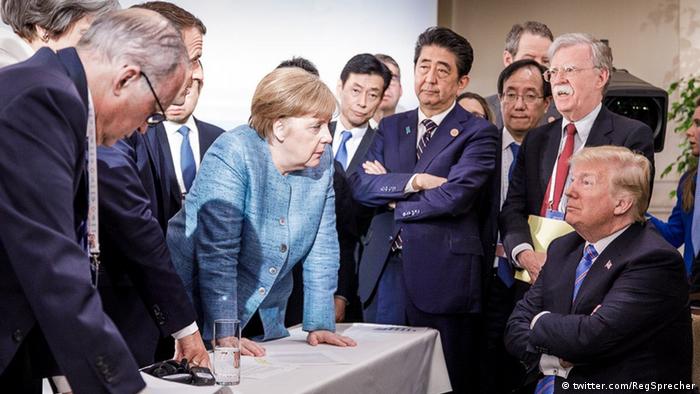 US President Donald Trump on Saturday called for a revamp of the global trade system, insisting he wanted the complete removal of trade barriers within the Group of Seven (G7).

Trump addressed a wide range of concerns in comments to the press before leaving the G7 meeting in Canada.

Trump, who railed against globalization in his election campaign, said he wanted all G7 nations to remove any tariffs, subsidies and other trade barriers.

"You go tariff-free, you go barrier-free, you go subsidy-free," Trump opined, calling it "the ultimate thing." He said other world leaders reacted positively to the idea.

His economic adviser Larry Kudlow backed up the call, saying, "We’re going to clean up the international trade system."

But Trump's claims that he is in favor of global free trade would appear contradictory to his recent imposition of tariffs on US allies, much to their collective discontent.

Trump insisted US allies would yield to his demands of a trade rebalance, warning that the US would crush any opposition in a potential trade war.

"They do so much more business with us than we do with them that we can't lose … When you’re down $375 billion you can't lose," he said, likely referring to the trade imbalance with China.

He said he could tell from the smiles of European leaders at the G7 that they knew that "the gig is up" and that they would negotiate terms with Washington.

Despite this, he insisted his relationship with Western leaders was at a "10."

On Russia reentering the G7

Trump repeated his call for Russia to be allowed back into the alliance of world powers. It was kicked out of the G8 in 2014 for annexing Crimea from Ukraine.

"We're looking for peace in the world. We're not looking to play games."

Russian Foreign Minister Sergei Lavrov said on Saturday that Moscow "never asked anyone to return" to the G7 and that Russia was happy working with the G20.

When a CNN reporter asked Trump about anger and frustration from US allies over trade, he lambasted the reporter and his "fake friends at CNN."

"Fake news CNN. The worst."  When questioned on his attack by another reporter Trump defended his practice of attacking the media.

He said he "came up with the term fake news" because much of the US press "is very dishonest." Many reporters "are unbelievably dishonest."

Trump left the meeting early to fly to Singapore for a meeting with North Korean leader Kim Jong Un, describing it as a "mission of peace." He said he was "going in with a very positive attitude and I think we will come out fine."

He said he would know within the first minute if Kim was serious about denuclearization and if he wasn’t serious he would walk out of the meeting.

His early departure from the G7 meant he will miss sessions on climate change and the environment.

Russia and China make show of unity as US relations falter

Neighboring giants China and Russia have both stressed the value of a strategic partnership amid faltering relations with the US. Russian President Vladimir Putin was handed a medal by his Chinese counterpart. (08.06.2018)

Donald Trump is not very popular in Canada nor in the country's French-speaking province Quebec. So with the US president there for the G7 meeting, why are there no large protests against him? (09.06.2018)