Dominik Kahun of the Chicago Blackhawks: 'Winning Olympic silver was a huge step forward for Germany'

It's been a year since Germany's ice hockey team won silver at the Winter Olympics. Since then, forward Dominik Kahun has moved on to the Chicago Blackhawks. He spoke to DW about the Olympics and the leap to the NHL. 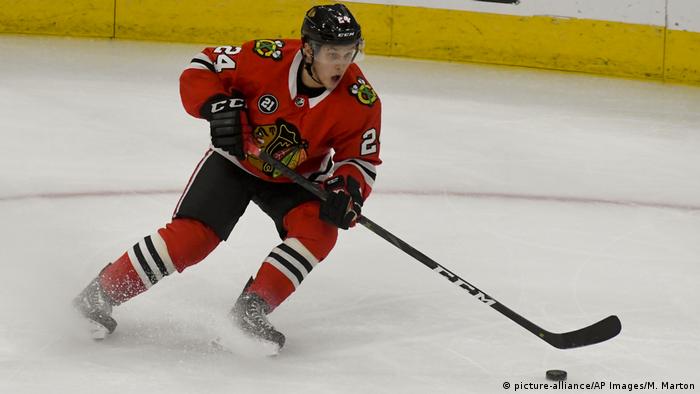 DW: Dominik Kahun, it's been one year since you and the German national team were within a minute of winning Olympic gold in South Korea. Now you're playing in the National Hockey League. How far away does Pyeongchang feel now?

Dominik Kahun: Due to the fact that I always have the silver medal with me, I am often reminded of this memory. But of course, it is a while ago now, and I am always focusing on the next game, on the here and now in Chicago. But of course it was an experience that I will never forget.

A year after winning silver in Pyeongchang, you've seen some time on the Hawks top line with Jonathan Toews and you're obviously getting your share of minutes. How big a step up was it from the DEL to the NHL?

There is no comparison of course; it's a completely different world. The biggest difference is the number of games [52 DEL regular season games, 82 NHL regular season games]. Here you have a game every second or third day, you're on the go the whole time. It's not like in Munich, where you practice for the whole week and then play on the weekend. Here, you have to be ready to get yourself up for a new game and a new opponent every second day.

You joined the Chicago Blackhawks in training camp and made the team. Did you surprise yourself by doing that, or did you expect to stick with the big club right away?

That was the goal I had for myself when I arrived here, but I didn't really know if it would happen that fast – or that I would get the opportunity to play on the first line. However, I knew that I could do it and I came her with the self-confidence that comes with experience.

Of course scoring my first NHL goal was one of the greatest feelings ever – and scoring in the Winter Game was special for me personally too, because it was another goal at a major event. Now I've scored at the World Championship, the Olympics, in the DEL playoffs and now in the NHL. The fact that I was able to score at another major event made it even better.

Let's speak a little bit about your development: You played junior with the Sudbury Wolves of the OHL then started your professional career with Red Bull Munich. How important was it to your development to play a couple of years on the smaller ice surface in one of the world's top junior leagues, and how important were your years in one of the best hockey organizations in Germany, or even Europe?

Sudbury was very important to my development, just taking this step of coming to North America. My time in Munich really helped me too. It was my first professional team, there I was able to learn a lot from the veteran players about what it means to be a professional, how you need to conduct yourself both on and off the ice. This was very important for me. 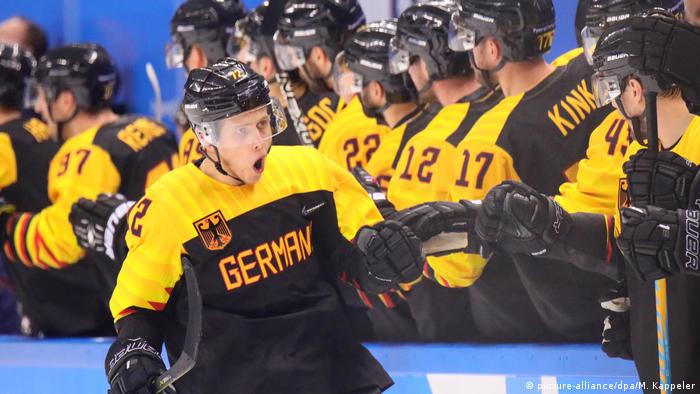 Let's speak about German hockey in general, which as we know, lags way behind football in popularity in this country. You and the national team surprised just about everybody by winning silver at the Winter Olympics a year ago – do you think that will give hockey a boost in popularity, particularly among youngsters in Germany?

It was really, really important, winning the silver medal was a huge step forward for us. But German ice hockey is still a very long way from where those of us involved in German hockey think it should be. And we all know that football will always be the No. 1 sport in Germany.

By my count there are six Germans playing in the NHL at the moment, which is a far cry from a couple of decades ago when it was only one or two. Former national team coach Marco Sturm has also become the first German-trained coach in the NHL, working as an assistant in LA. How important is it for the development of the game here to have Germans playing – and now coaching in the world's best league?

It's similar to the Olympics. It's good publicity for the game, and it shows that more and more Germans are proving themselves capable of making it here – as a player or a coach. This should be a motivating factor for those who haven't made it here yet, as they see that it is possible – if you play well in the DEL – and I know that there is more and more scouting going on in Germany. I am convinced that more and more Germans will get their shot (at the NHL).

Finally on the national team: Under Marco Sturm, Germany improved greatly from the previous few years – culminating in that Olympic Silver medal win. What do you know about the new national team coach, the relatively inexperienced Toni Söderholm, and how confident do you feel about Germany's future under him?

I actually played with Toni in Munich just three years ago, he was a defenseman. I quickly realized what a great guy he is. One of his best qualities is that he can really communicate well with the players, as a player you enjoy working for him – and I'm really looking forward to it.

Dominik Kahun, 23, is in his rookie season as a forward with the Chicago Blackhawks of the National Hockey League. The Czech native moved to Germany as a child, and learned ice hockey in the Mannheim youth program. He spent two years with the Sudbury Wolves of the junior Ontario Hockey League before turning professional with Red Bull Munich of the DEL (German Hockey League) in 2015. Kahun has made 32 appearances for the German national team, scoring six goals, since earning his first callup in 2014. He was part of the Germany team that won the silver medal in the men's ice hockey tournament at the 2018 Winter Olympics in Pyeongchang.