When industrial America′s manufacturing legend Dodge Brothers was stopped cold by the flu | Business | Economy and finance news from a German perspective | DW | 24.06.2020

A century ago an epidemic ended the careers of America's brightest industrial stars. Both John and Horace Dodge died in the aftermath of the Spanish flu. Their deaths changed the face of Detroit automotive manufacturing. 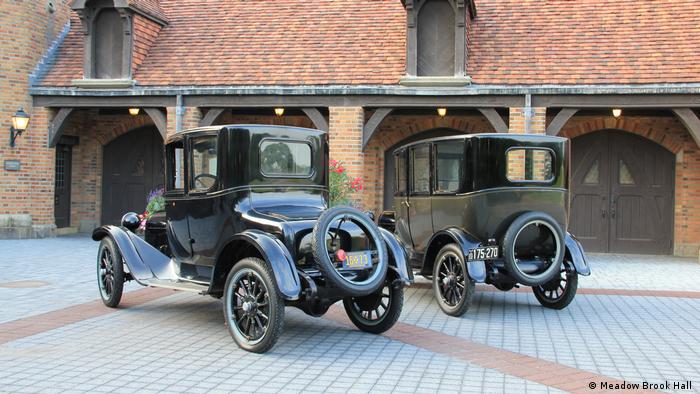 John and Horace Dodge were inseparable in life — and in death. They were the largest makers of automotive components in the world before founding their own car company, Dodge Brothers, in 1914. Starting from scratch, the automotive pioneers continuously ramped up production and in 1919 they made 121,039 vehicles, a strong second place behind Ford. Total sales for the year hit nearly $121 million. Then suddenly it all came crashing down in 1920 when both brothers died.

Their story is the American dream of striking it rich. Yet their stratospheric rise to the top was as surprising to them as to everyone else. The Dodge brothers were rough, heavy-drinking men from Niles, a small town in Michigan. John Francis was born in 1864, Horace Elgin in 1868. Their father and uncles were machinists and they grew up tinkering in machine shops. 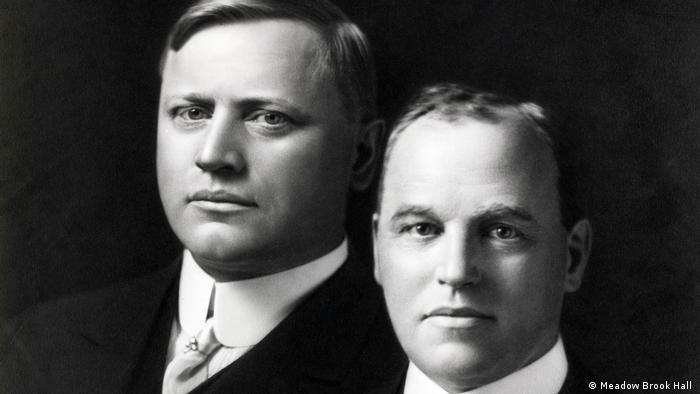 A studio portrait of automotive pioneers John F. Dodge and Horace E. Dodge together around 1914

Starting in 1892 they worked for nine years in Windsor, which was on the Canadian side of the Detroit River. There they toiled for an equipment manufacturer before producing their own bicycle. Then after gaining years of experience as machinists and managers they were ready for something bigger.

Wanting to be their own bosses, they started their own machine shop in 1900 in Detroit. John was nearly 36 and Horace was 32. They were confident and were not shy. An ad in the city directory listed all the different types of work they could do, concluding with: "in short, we are prepared to do any class of work that can be done in a first-class modern shop."

It was no bluff and their reputation must have preceded them, because by the end of the year they were already supplying engines to Olds Motor Works. Six months later they were making transmissions for the company. In February 1903 their lives changed forever when Henry Ford asked them to make "running gear" for his Model A.

This may not sound earth-shattering, but the running gear is the entire automobile except the wheels, tires and body. Ford didn't have the money to build his own factory so he needed outside help. He could only assemble the pieces to make finished cars. Everything that made the car move was all Dodge. On top of that, Ford was a two-time business loser and the new Ford Motor Company didn't even officially exist. It was a risky undertaking.

"With the Ford Motor Company habitually behind in its payments, the Dodges agreed in June 1903 to write off overdue payments of $7,000, extend Ford an additional $3,000 in credit (a note due in six months), and in return receive 10% of the Ford Motor Company stock," wrote Charles K. Hyde in "The Dodge Brothers — the Men, the Motor Car, and the Legacy." At the time there was only a handful of shareholders and the Dodges' financial backing would soon pay dividends.

For the next 11 years, the Dodge Brothers worked exclusively for Ford, and John Dodge was made a vice president of the company. By 1910 they outgrew their production facilities and opened a massive plant complex in Hamtramck, an enclave surrounded by Detroit.

In 1913, they had over 2,500 employees and were the largest supplier of parts and components in the industry. They had built more than 500,000 vehicles, but for others while their business was totally dependent on Henry Ford. They needed a new plan: They were going to make their own car.

Within 18 months the brothers stopped producing for Ford, expanded their plant, designed an entirely new car and made or bought all the tools and machines to make it. 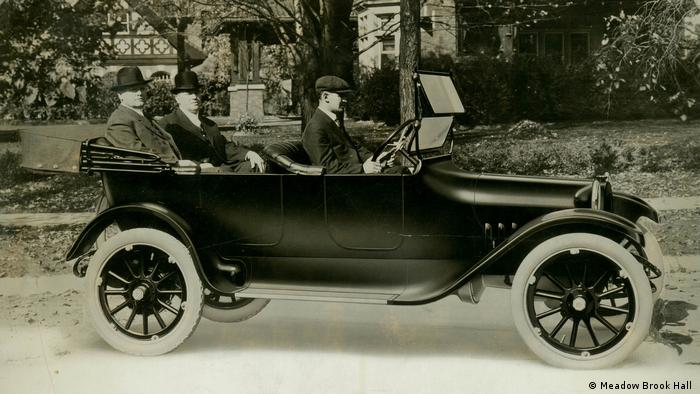 John and Horace Dodge present their car to the press on November 14, 1914, in front of John's home in Detroit. Often claimed to be the company's first car off the assembly line, it was more likely an early prototype. Driving the brothers is Guy Ameel, head of final assembly. The four-door touring car cost $785

Dodge Brothers Motor Car Company was officially established on July 1, 1914. It was one of 120 new makes of car introduced that year. To create buzz they announced their new car in the Saturday Evening Post in August. At first advertising billboards only showed the words "Dodge Brothers." Later "Motor Car" and "Reliable, Dependable, Sound." were added. None of it included illustrations or details.

The hype worked. "The Dodge Brothers are the two best mechanics in Michigan … When the Dodge Bros. car comes out, there is no question that it will be the best thing on the market for the money," wrote the Michigan Manufacturer and Financial Record in August. 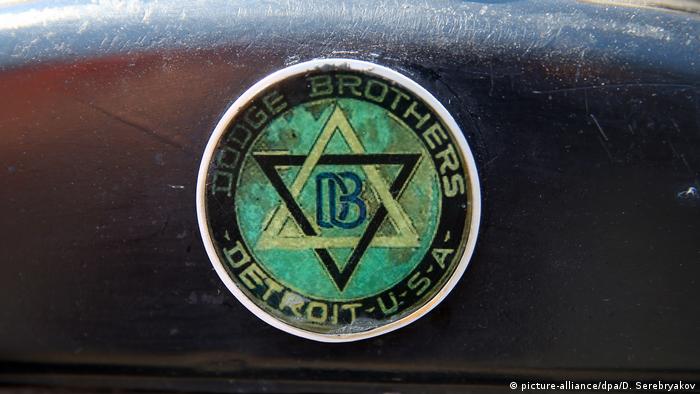 The meaning behind the Dodge Brothers emblem has been a mystery since its first use. Neither brother ever explained it. The star may be two interlocking deltas, the Greek letter for D. It may be a symbol of the two brothers being joined. Or it may just be a symbol that they liked

When a Detroit dealer got the first Dodge production car in November 6,000 people came to see it on day one. On December 4 the first customer took delivery. The 5-passenger open touring car was an instant hit. It had a 35-horsepower four-cylinder engine and cost $785 compared to $490 for the Model T's 20 horsepower. It had an electric starter and a speedometer. One of its most important features was its all-steel body, which was one reason the car weighed over 2,000 pounds. And it came in any color as long as it was black.

At first Dodge Brothers made everything for their new cars but the bodies, tires, glass, lights and batteries that weighed around 50 pounds. The mid-priced car market was crowded. Hyde estimated that at the time "cars selling for $676-875 accounted for only 15.5% of the market in 1915 and 19.8% in 1916, when 15 substantial manufacturers competed in that narrow price range." Still Dodge Brothers put things into high gear and even exported to nearly 50 countries.

For the growing workforce it was hard work. Most employees had a typical workweek of 10-hour days Monday through Friday and a five-hour day on Saturday.

The huge factory complex had its own power plant and the first dedicated test track built on the grounds. Smokestacks spewed dirty puffs of smoke. The constant sound of machines, tools, hammers, furnaces and cranes was sometimes deafening. 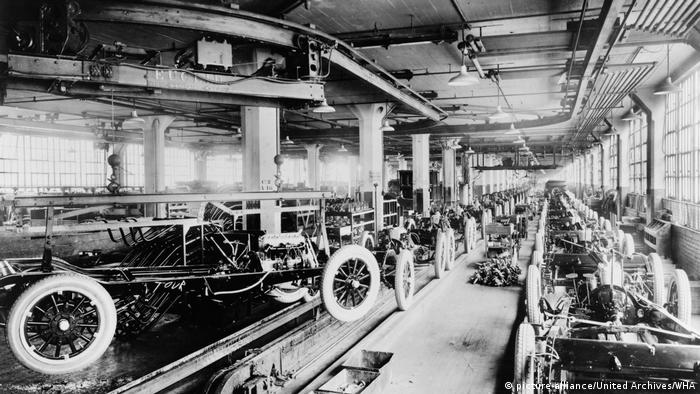 Unlike some of their competition, Dodge Brothers did not make annual model updates to spur sales. Rather than rework the outside with cosmetic changes the company added mechanical improvements inside. This kept down costs and made used Dodges more valuable. To grow the business they added a wider range of models and commercial vehicles. 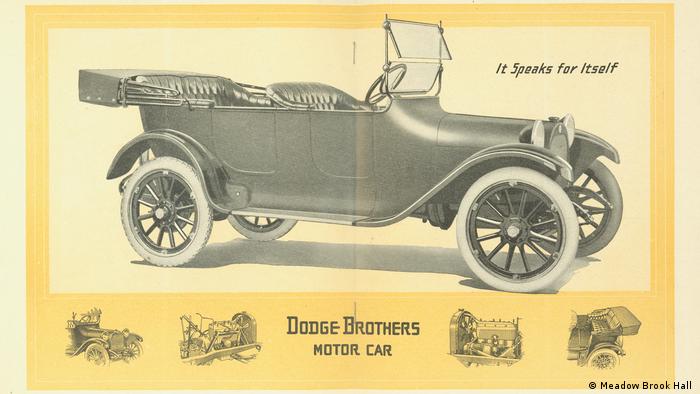 A Dodge Brothers Motor Car advertisement with the phrase 'It Speaks for Itself' from 1914, the first year of production

Dodge without the brothers

As the company grew something else happened. In 1919, Henry Ford bought their Ford Motor Company shares for $25 million. Add to this the dividends they cashed in over those years and the Dodge brothers made an astonishing $32 million from their initial "investment" of $10,000 in 1903.

Despite Henry Ford taking sole credit for his company's success, it had been a fantastic two decades. The Dodge brothers were multimillionaires, had yachts and mansions, and ran a profitable business making their own cars. The future looked limitless.

But the euphoria was not to last. While at the National Automobile Show in New York City in January 1920, both John and Horace got sick. Whether it was a flare-up of the devastating 1918 Spanish flu pandemic that killed over 50 million people or another deadly flu strain is not clear. What is certain is that both were diagnosed with influenza, complicated with pneumonia. John died days later on January 14 in his hotel room. He was 55. 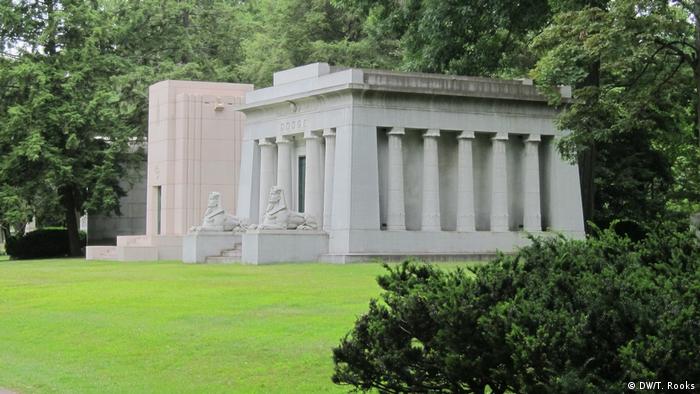 Horace recovered somewhat, but without his brother he seemed lost. He was still weak and spent much of the year in Florida while company managers stepped up. He died 11 months after his brother on December 10. He was 52.

Most reporters pointed out that he died of complications from influenza — or sadness — but his death certificate points to cirrhosis of the liver. Whatever the case, the brains and the heart behind Dodge Brothers were gone. Now two middle-aged immigrant widows, Matilda Rausch and Anna Thomson, were the unlikely owners of one of the biggest manufacturing companies in the world.

Peugeot and Fiat Chrysler have said the plan will result in €3.7 billion in savings, allowing them to work on creating more sustainable vehicles. The new company will be a 50-50 merger of the two. (18.12.2019)

The French PSA group and Fiat Chrysler are to merge to create the world's fourth-largest carmaker. Such mega mergers are critical for the future of the auto industry as it prepares to shift to electric vehicles. (31.10.2019)

The North American International Auto Show kicks off this week. Largely shunned by European carmakers, the expo will be a concentration of American might. It may also be the end of an era. (11.01.2019)