Eurogroup chairman Jeroen Dijsselbloem has come under increasing pressure over comments he made about debt-ridden nations playing fast and loose with their money. Italy and Portugal have called for his resignation. 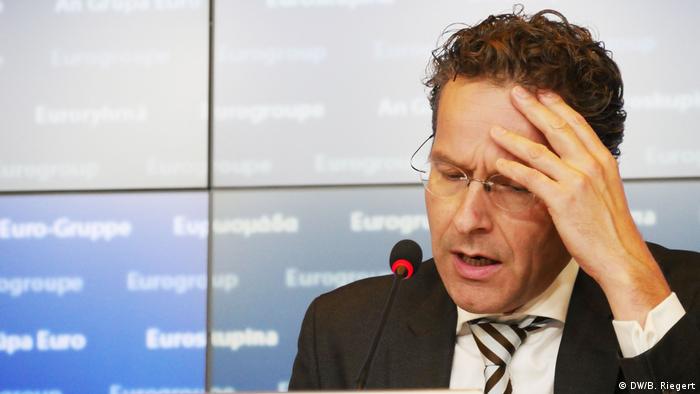 Euro group chief Jeroen Dijsselbloem has criticized European Commission President Jean-Claude Juncker for his attitude towards the Stability Pact. He called on Juncker not to turn a blind eye to France's budget deficit. (03.06.2016)

The Eurogroup has reappointed Jeroen Dijsselbleom as its leader. The Dutch finance minister's second term promises to be challenging, as the eurozone looks for the most viable ways to keep Greece in the currency union. (13.07.2015)

Jeroen Dijsselbloem (pictured above) brushed off criticism and rising calls for the Eurogroup chief to step down from his post on Wednesday.

In an interview published on Monday with German newspaper Frankfurter Allgemeine Zeitung, Dijsselbloem remarked that financially-strapped countries shouldn't ask for aid and spend their money on "booze and women."

"During the euro crisis, the countries of the north of the eurozone showed solidarity with the countries in crisis," the paper quoted him as saying.

"As a social democrat, I think that solidarity is extremely important. But whoever benefits also has duties," he added.

"I can't spend all my money on booze and women and then ask for your support."

A spokesperson for Dijsselbloem said on Wednesday that the comments were a general remark on solidarity in the eurozone and that he did not intend to single out specific European countries.

Late Tuesday, Dijsselbloem had refused to apologize when asked by an European Parliament lawmaker if he would say sorry.

However, after criticism intensified on Wednesday, the Eurogroup boss - who also serves as Dutch finance minister - clarified his remarks in a statement to the Agence France-Presse (AFP) news agency. "I regret it if anyone is offended by the remark. It was direct, and can be explained from strict Dutch, Calvinistic culture, with Dutch directness," said the statement, in which he also made clear he had no intention of stepping down.

Dijsselbloem's remarks had in the meantime drawn sharp condemnation from Spain, while Italy and Portugal called for the eurozone chief's resignation. The gaffe also exposed north-south tensions within the European Union's single currency zone.

"He has missed a perfect opportunity to shut up," former Italian Prime Minister Matteo Renzi said in a Facebook post. "The sooner he goes, the better."

"Europe will only be credible as a common project on the day when Mr. Dijsselbloem stops being head of the Eurogroup and apologizes clearly to all the countries and peoples that were profoundly offended by his remarks," Costa told reporters.

Spanish MEP Esteban Gonzalez Pons called the remarks "a racist and male-chauvinist insult to the southern countries, and their women", echoing calls for Dijsselbloem to resign.

The dispute was a top story in Italian news on Wednesday, as commentators slammed the Dutch politician. He was already regarded with suspicion for his views on the application of EU budget rules to Italy, which some regard as hawkish.

Manfred Weber, a senior German MEP who heads the center-right European People's Party, the largest group in the European Parliament, tweeted Wednesday that there was "no room for stereotypes" in the eurozone.

The German government refrained from commenting on Dijsselbloem's comments on Wednesday. A spokeswoman for German Finance Minister Wolfgang Schäuble said that the finance minister supports Dijsselbloem's work as the head of the Eurogroup.

Dijsselbloem will likely lose his job as finance minister in the coming months after his Labor party suffered a heavy loss in the Netherlands' general election last week.

However, his mandate as head of the eurozone will last until January 2018 and EU rules do not explicitly state that the person holding the post must be a finance minister.