Euro group chief Jeroen Dijsselbloem has criticized European Commission President Jean-Claude Juncker for his attitude towards the Stability Pact. He called on Juncker not to turn a blind eye to France's budget deficit. 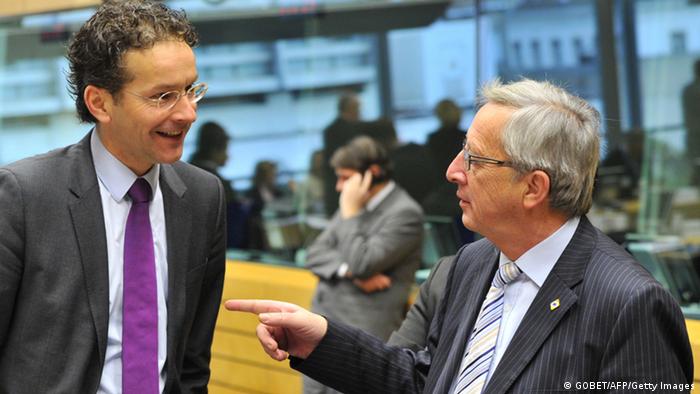 Euro group chief and Dutch Finance Minister Jeroen Dijsselbloem (pictured above, left) warned on Friday against a lax interpretation of the European Stability Pact and too much indulgence with "deficit sinners."

In an interview published in German newspaper "Süddeutsche Zeitung" and six other European broadsheets, Dijsselbloem said it would "be wise" for the European Commission "to pay a little more attention to their credibility."

The set of EU rules known as the Stability and Growth Pact came about in 1998 in order to strengthen the monitoring of member states' budgets.

"We member states need an objective arbitrator who upholds the pact," the Dutch finance minister said. He also complained of politicizing budgetary decisions.

In Spain, the Commission recently postponed a decision on stepping up action againts the country's excessive deficit until after parliamentary elections, which are scheduled to take place at the end of June.

Dijsselbloem's statements on Friday focused in particular on comments made by Juncker earlier this week when he was asked to justify why France had repeatedly been granted exceptions from the Stability Pact.

"Because it is France," Juncker replied.

Since the global financial crisis struck in 2008, France has failed to bring its public deficit back under the 3-percent threshold, as stipulated by the Stability Pact.

Following the Paris terrorist attacks last year, Juncker said France should receive special deficit rule treatment after boosting its security expenses. Thanks to a deferral, granted by Brussels at the beginning of 2016, Paris now has until next year to meet the required budget deficit.

Dijsselbloem criticized Juncker's stance, warning that if the Commission continues to turn a blind eye time after time, then the euro group would be left with a "blind monetary union."

"If [Juncker] says that things are different for France, then that really damages the credibility of the Commission as guardian of the pact - and that's my concern," Dijsselbloem said.

The Euro group chief called on the EU Commission to maintain and protect the rules of the Pact, "regardless of the size of a member state or of whether elections are being held."

Ahead of crucial meetings, unclarity in Brussels about Greece

The Eurozone insists Greece's 'no' vote in the referendum has made negotiations about further aid for Greece more difficult. But rhetoric alleging a 'no' vote would also mean 'no' to Europe appears scaled down. (06.07.2015)

The European Commission has revised downward its expectations for economic expansion in the 19-member eurozone. Its spring outlook revealed particular concerns about developments in Spain and France. (03.05.2016)