Dijsselbloem appointed for a second term as Eurogroup president | Business | Economy and finance news from a German perspective | DW | 13.07.2015

The Eurogroup has reappointed Jeroen Dijsselbleom as its leader. The Dutch finance minister's second term promises to be challenging, as the eurozone looks for the most viable ways to keep Greece in the currency union. 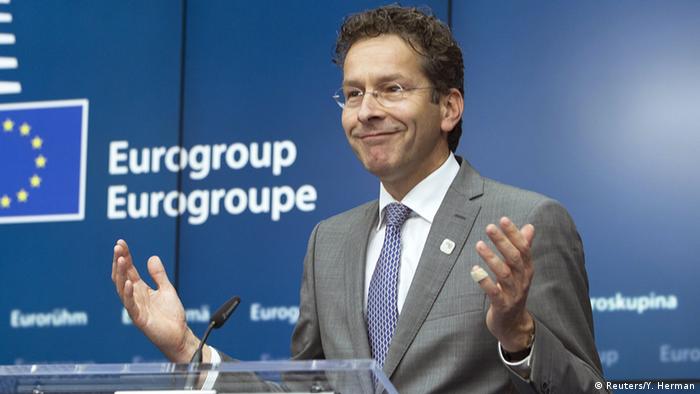 The Eurogroup has reappointed Dutch Finance Minister Jeroen Dijsselbloem as its president for the next two-and-a-half years. The 19 eurozone finance ministers comprising the Eurogroup voted unanimously for a new term under Dijsselbloem.

The Dutch finance minister took to Twitter to thank his fellow ministers for having chosen him again.

The center-left Dijsselbloem was chosen over only one other contender, Spain's center-right Economy Minister Luis de Guindos. German Chancellor Angela Merkel said last year that she would back de Guindos’ campaign.

Dijsselbloem's appointment came just hours after an agreement with Athens to renegotiate a third bailout was reached.

The Dutchman was thrust firmly into the limelight in the last months while he tried to keep the euro on track as the Greek debt crisis deeply divided the eurozone and made negotiations turbulent and unpredictable.

But Dijssebloem has had to learn fast. He became the Eurogroup’s president in January 2013, after only 100 days of being The Netherlands’ finance minister.

Within his own country, Dijsselbloem was known for helping his Labor Party through a leadership crisis in 2010, and is credited with the development of a 2012 election strategy that gave the party a comeback.

He’s known for pragmatism, and for supporting strict austerity and reform policies as a solution to end the eurozone’s debt crisis – earning him both scorn and praise across the currency union.

“Jeroen helped us to navigate the eurozone during the crisis and he did an excellent job,” said Slovak Finance Minister Peter Kazimir. Slovakia had argued for Greece’s “amicable split” from the eurozone.

Since the deal itself was struck early on Monday, Dijsselbloem has cautioned that plenty of work is still ahead – especially on the Greek side.

In the Eurogroup’s third meeting in three days, Dijsselbloem said that the ministers still have “to find the golden key to solve this issue."