Germany's two largest lenders, Deutsche Bank and Commerzbank, have confirmed they are in merger talks, bowing to pressure from the government. Both banks saw their share prices collapse by more than half last year. 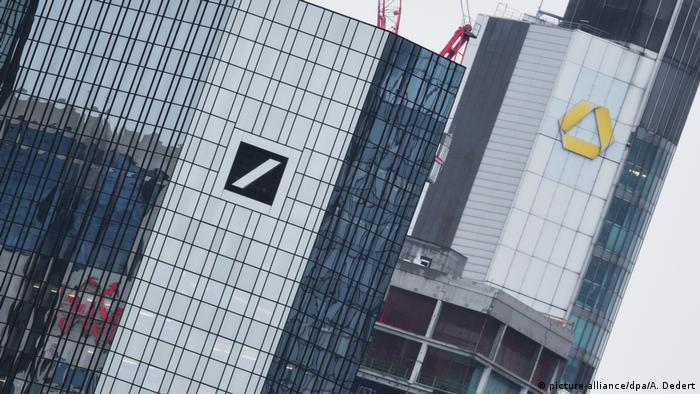 Germany's troubled lenders Deutsche Bank and its domestic rival Commerzbank are in talks over a possible merger, the two companies confirmed on Sunday.

Commerzbank said in a brief statement that the two lenders "have agreed today to start discussions with an open outcome on a potential merger."

Deutsche Bank said its management board had decided to "review strategic options" but stressed that there is no certainty of any transaction emerging.

Read more: Opinion: Deutsche-Commerzbank merger is non-starter from the beginning

The statements follow months of speculation after Chancellor Angel Merkel's government urged the two Frankfurt-based firms to explore an alliance to prevent foreign takeover interest and ensure a regular stream of finance for Germany's export-driven companies.

Struggling since the crisis

The German government remains Commerzbank's largest shareholder, with a more-than-15 percent stake, having bailed the bank out at the height of the 2008 financial crisis.

Deutsche Bank, meanwhile, has struggled to generate sustainable profits since the crisis. In 2016, the International Monetary Fund said Deutsche was the world's biggest potential risk among peers to the financial system because of its links to other banks.

German officials fear that a recession or big fine, for example, could derail the largest lender's fragile recovery.

Proponents say the combined entity would have a market value of some €25 billion ($28.3 billion), based on Friday's closing stock prices, and a 20 percent share of the German retail banking market.

The merged bank would have roughly €1.8 trillion in assets, such as loans and investments, nearly as big as France's largest bank BNP Paribas.

Critics, however, have warned that combining two ailing firms will not produce a healthy one.

Berlin also wants to keep Commerzbank's specialty — the funding of medium-sized companies, the backbone of the economy — in German hands.

Germany's Verdi labor union, meanwhile, has objected strongly to the possible merger, arguing that at least 10,000 jobs are at risk.

The two banks had more than 133,000 full-time employees between them at the end of last year.

Any potential tie-up would have to overcome numerous hurdles — including the marrying of two IT systems, working through different corporate cultures, liaising with unions, and the huge task of recapitalizing the new lender.

Hudson Executive has built a 3.1-percent stake in Germany's biggest lender to become one of its major shareholders. The New York-based fund said it believed in CEO Christian Sewing to turn around the ailing business. (01.11.2018)