Björn Höcke will be allowed to remain a member of the Alternative for Germany (AfD) party, an arbitration tribunal has ruled. Höcke claimed last year that Germany was "crippled" by its "stupid" politics of remembrance. 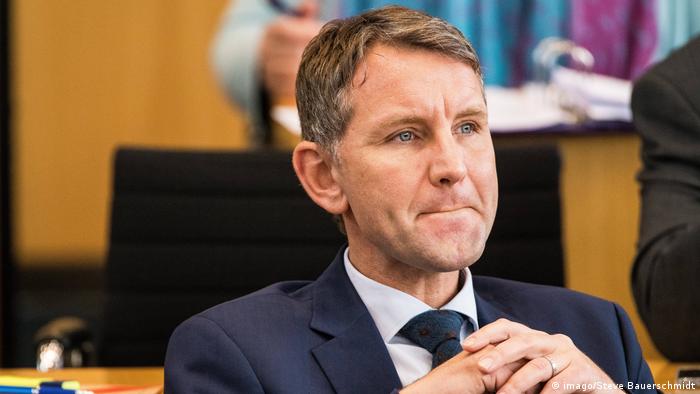 Björn Höcke, the head of the Alternative for Germany (AfD) in the state of Thuringia, should not be ousted from the far-right party over remarks he made about the Holocaust, an AfD arbitration court ruled on Wednesday.

The tribunal dismissed the motion filed last year by the AfD's federal executive committee, which claimed that Höcke had demonstrated an "affinity to National Socialism" during a speech to the party's youth wing in January 2017. The court said the claims were unfounded and that Höcke had not intentionally violated the party's values.

In his speech, Höcke chided Germany's commemoration of its Holocaust crimes, saying that "these stupid politics of coming to grips with the past cripple us."

The right-wing lawmaker went on to call for "nothing other than a 180-degree reversal on the politics of remembrance." Referring to Berlin's Memorial to the Murdered Jews of Europe, Höcke added: "We Germans, that is to say, our people, are the only people in the world who have planted a monument of shame in the heart of their capital."

The motion against Höcke was filed by the AfD's old executive under then party leader Frauke Petry, who openly called for the disgraced lawmaker to be expelled.

However, Alexander Gauland and Jörg Meuthen, who now preside over the AfD's national executive, have since come out in defense of Höcke. Speaking after the tribunal decision, Gauland only said it was now up to federal executive committee to discuss whether to appeal the verdict. However, party sources told Germany's DPA news agency that the party leadership is unlikely to take the case before the Federal Court of Arbitration, let alone even discuss it when it meets next month.

Stefan Möller, Höcke's spokesperson, said he hoped the federal committee would accept the tribunal's verdict and ultimately put an end to the party infighting that defined the "Petry-era."

Politicians in Germany responded to the AfD's tribunal with outrage.

"Why would this party exclude someone whose nationalist, racist, anti-Semitic and ethnic slogans are the spiritual foundation of the AfD?" SPD lawmaker Burkhard Lischka said. The arbitration court's decision underlined the fact that "the AfD is dependent on guys like Höcke."

The deputy chairman of the Green Party's parliamentary group, Konstantin von Notz, said the decision demonstrated how the AfD's contingent of "ethnic nationalists" was becoming increasingly extremist and influential within the party. "This is a very serious development, which those who seek to defend democracy and rule of law must keep a close eye on," Notz said.

DW looks at the Alternative for Germany (AfD) party, entering the Bundestag as the third largest party. Its main appeal is its opposition to Angela Merkel's open-door policy toward migrants. (24.09.2017)