Deportation of Afghans ′calmer than expected′ | Germany | News and in-depth reporting from Berlin and beyond | DW | 15.12.2016

Deportation of Afghans 'calmer than expected'

Controversy surrounded the first collective deportation of asylum seekers from Germany to Afghanistan. Melisa Ergül-Puopolo was at the airport to observe their departure. 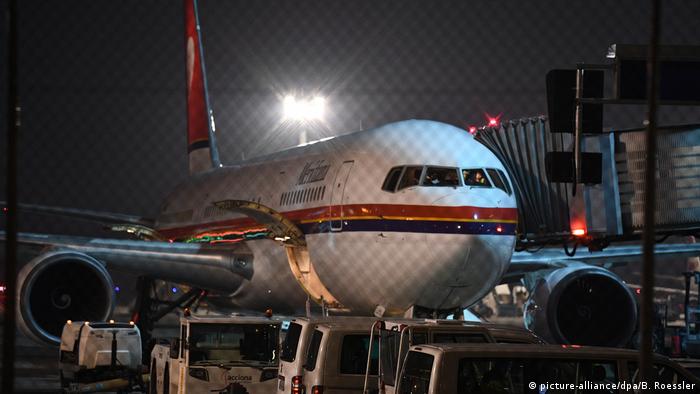 Germany has begun a plan to begin more mass deportations. But the political pressure to accelerate asylum procedures and deportation has to be balanced by the rule of law. (15.12.2016)

The German interior minister has said the decision to deport a group of rejected Afghan asylum-seekers was "necessary." But not everyone agrees with that assessment. (15.12.2016)

DW: Ms Ergül-Puopolo, as a so-called "deportation observer" you were at Frankfurt airport to observe the deportation of refugees back to Afghanistan. What impression did these people make on you? Did they seem resigned, or did they resist?

Melisa Ergül-Puopolo: No, there was no resistance at all. Contrary to expectation, the operation proceeded very calmly. There were a few urgent court orders to halt proceedings, and those people were then excluded from the operation, but apart from that it all passed off peacefully. According to my count, 34 people were deported.

Individuals were taken out of the group again as the deportation was already underway?

Precisely. There were some more faxes from administrative courts or the constitutional court, and in those instances the proceedings were then halted.

What happened to those people?

They'll be taken back to the states that brought them: to Bavaria, Hesse, Baden-Württemberg, North Rhine-Westphalia and Hamburg.

Were you able to speak to anyone from the group of deportees?

Yes, I spoke to quite a lot of them. They were relatively composed, offered no resistance, were quite calm. I made sure that they were all right and that there were no problems on their journey to Frankfurt Airport. All of them confirmed that the personnel who brought them were friendly, too. I must say that I honestly didn't expect this to proceed so peacefully.

How does a deportation like this usually proceed? Do the detainees awaiting deportation usually have to be restrained? 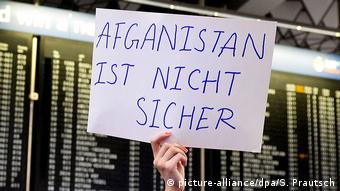 That is the exception. If they offer serious resistance, they're restrained. Otherwise there's no reason for it, and here the German police are not allowed to do it for no reason.

Did you see anything of the protests at the airport against the deportation?

No, they happen in a different area.

Could travelers at Frankfurt airport see the group of Afghans?

No, it's a completely separate area. The plane is right by the exit beside the police station, and that's where they board.

You're often one of the few who knows about deportations, because the interior ministry doesn't inform the public about them in advance. Journalists are not allowed to observe them at Frankfurt airport, either. Do you experience this as a burden?

No, I simply report what I have seen and observed. 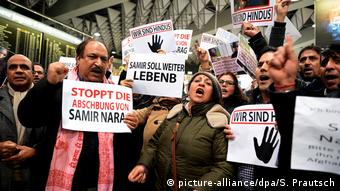 There were protests against the deportations at Frankfurt airport

Isn't it difficult to remain so detached when doing this?

I would say that I've managed. But of course I am moved by the fates of those being deported. However, my job as a deportation observer is above all to establish whether an operation passes off peacefully, whether there's any kind of misconduct on the part of the German police. I definitely cannot confirm the latter.

And how do you yourself feel about the fact that refugees are being deported from Germany back to Afghanistan? There's much disagreement about whether Afghanistan can really be categorized as a safe country.

I concur with my regional church's opinion on this.

So you don't consider Afghanistan a safe country of return?

That is my opinion, yes.

Melisa Ergül-Puopolo is a "deportation observer" from the social welfare service of the Evangelical Church in Hesse. This function is intended to bring transparency to an area of state activity in the context of deportations that cannot be monitored by the public.

The interview was conducted by Peter Hille.

The Afghans - A different perspective

German photographer Jens Umbach travelled to the north of Afghanistan to pay tribute to the people affected by the German military mission. (29.09.2016)