The bill was fast-tracked amid concerns imprisoned IS fighters may escape during a Turkish offensive against Syrian Kurdish forces. 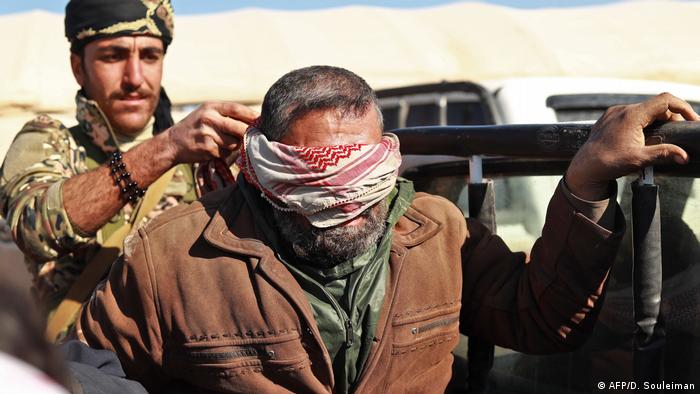 Denmark's parliament approved legislation on Thursday that allows people with dual citizenship who fought for the "Islamic State" (IS) group in Syria and Iraq to be stripped of their Danish nationality.

Lawmakers fast-tracked the bill amid concerns that IS fighters imprisoned by Syrian Kurdish forces could escape amid fighting with the Turkish military and its proxy rebel force.

"There is a risk that the Kurdish-controlled IS camps in the border area will collapse, and that foreign fighters with Danish citizenship will seek to return to Denmark," Prime Minister Mette Frederiksen said last week. "These are people who have turned their backs on Denmark and fought with violence against our democracy and freedom. They pose a threat to our security."

Read more: NATO chief warns 'fight against IS is not over'

The legislation allows the minister for immigration and integration to revoke the Danish citizenship of dual national IS fighters without a trial. Individuals stripped of their citizenship will have four weeks to appeal against the decision.

A majority of parties in parliament backed the bill after it was amended to include a "sunset clause," meaning it would expire in July 2021 unless parliament decided otherwise.

Around one-fifth of the 10,000 IS fighters imprisoned by Syrian Kurdish forces in northeast Syria are European.

Danish authorities estimate at least 158 people from Denmark traveled to Iraq or Syria to join IS since 2012. About 27 are believed to still be in the conflict zone and 12 imprisoned.  It is unclear how many are dual nationals.

Other European states have said they intend to strip dual nationals of citizenship despite the United States pressuring them to repatriate their citizens who joined IS.

European states have been wary of repatriating their citizens who went to fight for an IS "caliphate" in Syria and Iraq, fearing a political backlash, complications with gathering evidence to convict them, and the risk of extremist attacks at home.

Syrian Kurdish authorities say they are unable indefinitely hold the fighters and put them on trial.

Amid instability in northeast Syria, the United States and European states have sought to  accelerate the transfer of thousands of IS prisoners from Syria to Iraq, where they could face the death penalty.

The Turkish offensive in northeast Syria prompted the Syrian Kurds to the invite regime of President Bashar al-Assad into the region, where it may end up with the responsibility of the IS prisoners.

The Assad regime has been accused of torturing and executing thousands of prisoners during the civil war, a policy it would be unlikely to change were it to reassert greater control over northeast Syria.

Analysts have also warned that the Assad regime could use the threat of releasing foreign IS captives to unleash terrorist attacks abroad as a possible bargaining chip against the West.

Abu Bakr al-Baghdadi is purported to have issued his first message since April. He called on fighters to free tens of thousands of jihadis and family members from prison and detention camps. (17.09.2019)