One-time investor darlings like Beyond Meat and Oatly are suffering after demand for their alternatives to traditional meat and dairy declined. Can plant-based alternatives make a comeback? 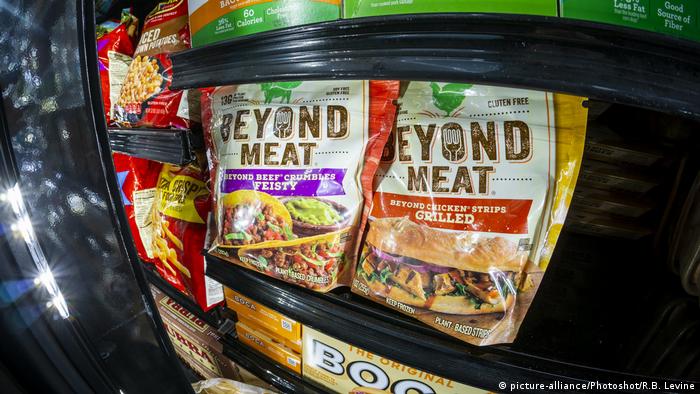 Sales of plant-based meat and dairy alternatives have started declining for some big name producers. After a year that saw rabid demand cause widespread oat milk shortages at Starbucks, the outlook for this consumer segment is looking less bright today.

This month, American producer Beyond Meat reported lower-than-expected third quarter sales, prompting shares in the company to fall 18%. Oatly, the Swedish producer of oat-based dairy alternatives, made a successful debut on the stock market in May this year, with shares quickly jumping up to trade at $29 (€25.70). But today, a stake in Oatly can be had for $12 a share. These are not isolated cases.

"In the past six months, unexpectedly, there has been a rapid deceleration in the category growth rates of plant-based protein," said Michael H. McCain, president and chief executive officer of Maple Leaf Foods, a Canadian food product company, during a November conference call with market analysts. "Of course, our performance has suffered in the middle of this, but the more concerning set of facts are rooted in category performance, which [has] basically flatlined."

The growing appetite for vegan products

Why the loss of appetite?

Several factors are weighing on the demand for plant-based meat and dairy alternatives.

Discussing the company's third quarter results, Beyond Meat President and CEO Ethan Brown listed no less than six reasons for the poor performance. Consumers are less open to trying new products and there is less interest in healthy food options, he said.

But others have argued that shoppers aren't convinced of the healthfulness of these products in the first place.

"There are a lot of different oils and complicated ingredients used in meat substitutes," Chris DuBois, senior vice president of protein practice at market research company IRI, told industry news source Food Business News. "When you look at the ingredient list of a McDonald's burger, like a Quarter Pounder or Big Mac, it's phenomenally simpler; it reads a lot simpler than traditional plant-based meats."

"Plant-based meats have a nice halo when it comes to sustainability, but I have yet to see a carbon footprint on a package," DuBois said. "There is a halo there, but I can't tell you if it's true. I, personally, have not seen it measured yet."

As in other industries, the coronavirus pandemic has also affected the plant-based alternatives market. Beyond Meat's Brown said rising infections led to people making fewer trips to the store and to the cancellation of events where new products would have been showcased.

Despite these hurdles, analysts still expect strong growth from the market over the coming years. Global retail sales of plant-based food alternatives were just under $30 billion (€27 billion) in 2020, according to an August report from Bloomberg Intelligence. The market could reach sales of $162 billion by 2030, the report said. That would account for nearly 8% of the global protein market, with growth driven primarily by omnivorous shoppers looking to occasionally replace animal products with plant-based protein.

The growth of this segment will require scaling up production in order to reduce costs for consumers. Plant-based food alternatives still tend to cost significantly more than the equivalent products derived from animals, another industry hurdle.

Most plant-based food companies are relatively young, with business models centered around brand new food technology. This increases costs and limits production compared with the well-established meat and dairy industries. Scaling up has proven particularly hard during a pandemic, when global supply chain backlogs have made it even more difficult to get ahold of ingredients or to build new facilities.

"We are looking at the entire global supply chain on plant protein and seeing how we can build those economies of scale," Rinka Banerjee, founder of Thinking Forks, a food and nutrition consultancy group based in India, told CNBC in August. "It's going to be a while before we reach that, and it will probably take somewhere between 15 and 20 years."

Cheaper in the long term

Some in the industry are convinced that plant-based food products, like those made of pea protein, will one day be cheaper than animal products.

"Cattle have to be fed, and most of them are corn-fed and other feed sources. The conversion rate of that feed is 8-to-1 — 8 to 10 pounds [3 to 4 kilograms] of feed gets 1 pound of beef," Carlos Barroso, president of CJB and Associates, a research firm focused on the food and beverage industry, told CNBC. "With peas, it's 1-to-1; with a little bit of loss, but it's close to 1-to-1."

Products are continuing to address issues like texture and ingredients. Just last week, Swiss food and beverage giant Nestle put $4 million towards backing Sundial Foods, an American plant-based meats company making vegan chicken wings with fake "skin" and "bones". The chickpea-based product is made up of just eight ingredients and has protein content comparable to the meat original.