′Defend Europe′ Identitarians charter a ship to return migrants to Africa | Europe | News and current affairs from around the continent | DW | 15.07.2017

European right-wing extremists have chartered a boat and set sail for the Mediterranean to help obstruct the flow of refugees. The so-called Identitarians are just the latest player in a complex flotilla of groups. 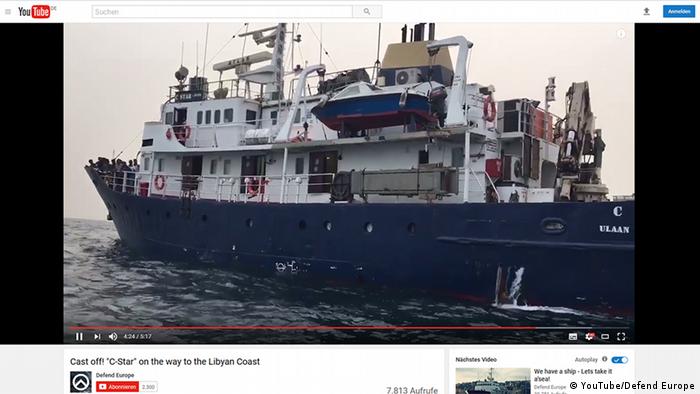 Pan-European members of the right-wing group known as the Identitarian Movement announced this week that they had chartered a ship and were sailing to the Mediterranean to stem the flow of refugees and migrants.

The group, calling themselves Defend Europe, crowd-funded more than $100,000 (87,000 euros) over about a month to fund their so-called "search and rescue" mission. 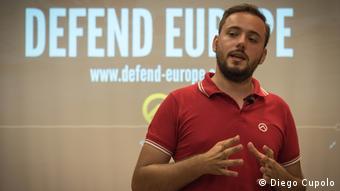 Lorenzo Fiato, the leader of the Italian branch of 'Generation Identity,' helped set up the initiative

Borrowing the Greek lambda as its logo, a reference to the Spartan shields used against the Persian Empire, they presents themselves as a movement against "the Islamic invasion of Europe" while dismissing nationalist labels placed on comparable groups.

The group plans to use their 40-meter (130-foot) ship to intercept smuggler boats before NGO groups can reach them and return them to the Libyan coast guard.

"Our goal is to step in where our politicians are failing and to do what is necessary to stop the deadly illegal migration into Europe," the group wrote on their crowd-funding page.

"We will offer the Libyan Coastguard our support as [a] recon ship ... We will save anyone we can if we get an SOS signal, but we will make sure that they will be brought back to Africa."

Earlier the group had said on its website it would try and force NGO ships to change course and to sap the financial and organizational resources of the charities.

It was unclear whether Libyan authorities would willingly work with the group or allow them to enter territorial waters.

The group raised the money despite financial institutions shutting down many methods of donation, in the end relying on Bitcoins and wire transfers. Defend Europe was propelled into the limelight with a stunt in May, where they unsuccessfully tried to stop a Medecins sans Frontieres vessel from leaving port on a rescue mission.

The group told German media they planned to bring armed security to ward off any retribution from people smuggling groups.

Their mission was motivated in part by claims that NGO rescue missions in the Mediterranean had emboldened smuggling groups, which were sending off increasingly unseaworthy ships in the knowledge they would be rescued and taken to Italy.

The UNHCR says these private rescue teams are now picking up 41 percent of the people rescued.

Rome argues that this extra safety net motivates more people to set sail in vessels that could never make the voyage unaided. It has since threatened to close its ports to these ships.

Elizabeth Collett of the Migration Policy Institute said nobody should be blamed for a situation that's simply bad all the way around.

"It's an extremely complex moral quandary that NGOs find themselves in," Collett explained to DW earlier this month. "And I think it's very easy to oversimplify the situation. On the one hand this is a humanitarian action: If we don't pick these people up they will die. They are in boats that cannot go a certain distance beyond a few miles from the Libyan coast. However, they are using those boats because of the presence of the NGOs. But having created that situation, NGOs can't just pull out."

Activist Group Hope not Hate said it had been monitoring the ship and its departure from a Djibouti port.

"This confrontational and dangerous project is organized by far-right activists with a long track record of anti-Muslim and anti-immigrant activism and while organized by Europeans it is being supported, funded and promoted by the extreme far-right around the world," the group wrote.

"The danger is that, if left unchallenged, Defend Europe could prove to be a major propaganda coup for the far-right Identitarian movement, which will use this mission to fundraise further and expand."

According to its predictions, the ship will reach Sicily by July 18.

In 2016, 180,000 migrants landed in Italy from Libya. According to the International Organization for Migration, the average death rate for people crossing the Mediterranean in this way is one in 39. More than 1,200 migrants are known to have died attempting the journey so far this year alone.