Deal or no deal, US needs Mexicans

Trump has used tariffs as a stick to threaten the US's trading partners into submission, as in his spat with Mexico. But if the US cuts immigration from its southern neighbors, who will do the jobs Americans don't want? 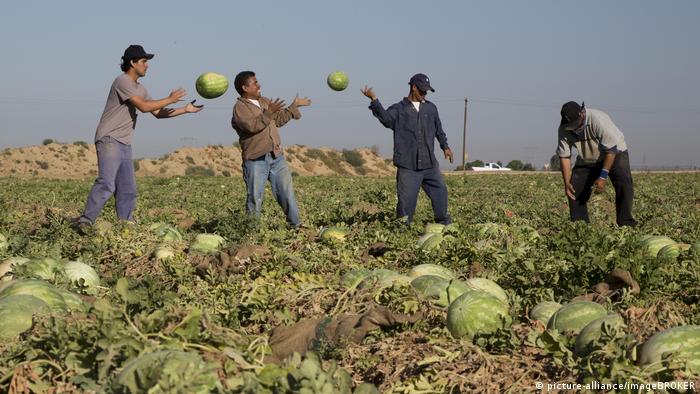 US President Donald Trump said on Friday that US tariffs on Mexican goods had been "indefinitely suspended" after negotiators from the US and Mexico finally reached a deal after Mexico promised to tighten its immigration procedures. Ominously, however, discussions will continue within the next 90 days, "if necessary," a statement from the US State Department said.

The deployment of 6,000 National Guard troops is the key commitment made by Mexico.

Mexican President Andres Manuel Lopez Obrador tried to put a brave face on it, suggesting the plan was his all along, while adding that Mexico's immigration policy would be guided by respect for human rights. He also urged the US to address the root causes of Central American migration by investing in programs to reduce poverty and violence in those countries. Few, however, will be holding their breath. Trump earlier this year cut US foreign aid to those countries.

Mexico exported to the US $346.5 billion worth of goods in 2018 — meaning that a 5% tariff on those products would have meant a de facto tax increase of $17 billion on agricultural goods, machinery, clothing and components used to make other products.

If the price is right

While almost all economists and markets breathed a sigh of relief on the tariffs front, others worry about the economic impact of a lack of low-skilled workers, given the US economy's rapacious appetite for low- and unskilled immigrants. Over the next 20 years, they will be needed to fill the hole left by the retirement of the baby boom generation.

About 8 million immigrants from Mexico have jobs, making up 5% of the US workforce.

But even before Trump started his wall campaign, economic growth in Mexico and the aging of the country's population were slowing the flow of Mexican workers into the US.

The number of undocumented immigrants in America declined to 10.7 million at the end of 2017 from a height of over 12 million at the peak of the housing bubble in 2008, according to the Center for Migration Studies.

Over 144,000 migrants were encountered or arrested at the US-Mexico border this May, a 32% increase from the previous month and the highest monthly total in a decade, US Customs and Border Protection said. Of those, nearly 133,000 crossed the border illegally, including 11,000 unaccompanied children.

This is especially important for the automotive industry and textile jobs, many of which depend on the proximity of cheaper labor in Mexico.

The problem for builders, meanwhile, is that the recovery in home building in the US has been accelerating faster than the growth of the labor force. The number of additional laborers needed is estimated at about 150,000.

The Department of Agriculture estimates that about half of the nation's farm workers are unauthorized, and without immigrant workers, it would likely face serious problems, despite Trump's optimism.

In 2017 research by the Cornell Farmworker Program, 30 New York dairy farmers said they used undocumented workers because they were unable to find and keep reliable US citizens.

A study for the dairy industry said that if federal labor and immigration policies cut the number of foreign-born workers by 50%, about 3,500 dairy farms would close, leading to a drop in milk production and a rise in prices of about 30%.

Unauthorized immigrants make up 24% of maids and cleaners, an occupation expected to need 112,000 more workers by 2024. The US will soon require more than 800,000 people to fill the jobs necessary to take care of retiring baby boomers.

And this shortage is set to continue for some time. The Pew Research Center projects very little growth in the working-age population over the next two decades. If the US were to cut off the flow of new immigrants, Pew said, its working population would shrink to 166 million in 2035 from 173 million in 2015.

US firms moving to Mexico

Caterpillar is considering opening a plant in Monterrey in northeastern Mexico, while General Motors is shifting some of their Detroit operations to Mexico. Ford is planning on moving some of its Detroit south of the border.

Mexico provides lower-priced inputs that feed into supply chains in the US and enable US factories to produce goods at a price that can compete with goods made in China and Europe.

"You can pay low wages. You're not too far away. You've got a border that because of the free trade area you can bring goods into the US. So given the substantial wage advantages, for many companies, it's an attractive proposition," says Martin Neil Baily, a senior fellow at the Brookings Institution.

US returns asylum seekers under 'Remain in Mexico' policy

Under controversial measures to deter irregular migration, US authorities have started transporting asylum applicants to Mexico to wait for a decision. Critics have called Donald Trump's new policy a "horribly bad idea." (30.01.2019)