Two Coptic Christian churches have been targeted in bombings, the deadliest to hit the community in months. The Coptic community has witnessed a sharp rise in targeted attacks by extremists in the past year.

Two separate bombings targeting Coptic Christian churches in Egypt on Sunday left at least two dozen people dead and many more wounded in the deadliest attacks to strike the community in months.

An explosion ripped through a Coptic Christian church in the city of Tanta, north of Cairo, as worshippers were celebrating Palm Sunday. At least 25 people were killed and more than 60 were injured.

Hours later, a suicide bomber detonated an explosive in front of Saint Mark's Church in the coastal city of Alexandria, killing at least 18 people and injuring 66 more, state media reported. The blast occurred after Coptic Pope Tawadros II attended mass at the church.

Egypt's foreign minister described the attack in a tweet as a "failed attempt against our unity."

An "Islamic State"-affiliated group claimed responsibility for the attack, according to the Amaq news agency, which is known for its ties to the militant organization.

Coptic Christians make up about 10 percent of Egypt's population. Coming a week before Easter, Palm Sunday marks an important day for the religion, namely the celebration of Jesus' entrance into Jerusalem before his crucifixion.

German Foreign Minister Sigmar Gabriel condemned the attacks in a statement, saying "the aim of the perpetrators, to drive a wedge between people of different faiths living peacefully side-by-side, must not be allowed to happen."

Pope Francis, who has joined discussions with Egypt's al-Azhar University to counter extremism, also condemned the attack and offered his condolences.

Francis is scheduled to visit Egypt later this month to show solidarity with the country's embattled Christian community. The pontiff will also visit Saint Mark's Coptic Orthodox Cathedral, which is the seat of Coptic Christian Pope Tawadros II. 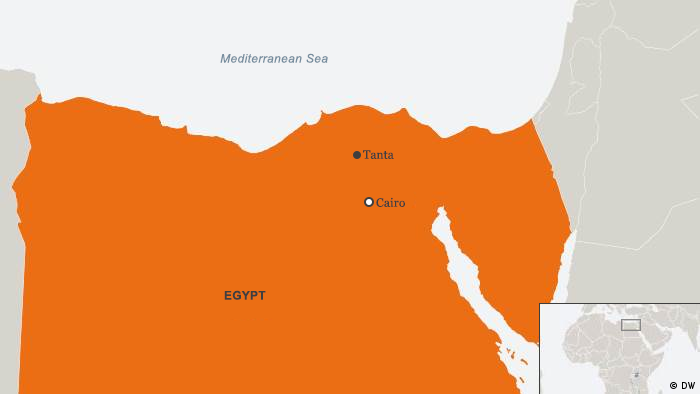 Grand Sheikh Ahmed el-Tayeb, head of al-Azhar, considered the highest Sunni Islamic center of learning, described the attacks as a "despicable terrorist bombing that targeted the lives of innocents."

In December, 29 worshippers at Cairo's largest Coptic cathedral were killed in a suicide bombing claimed by the so-called "Islamic State" (IS) group.

A number of jihadist-linked attacks and threats against Christians in the Sinai Peninsula have also forced hundreds to flee.

Egypt's army is fighting a counterinsurgency campaign against an IS affiliate in Sinai, where militants have carried out scores of attacks against police and army positions.

Intercommunal relations between Christians and Muslims can sometimes be strained in conservative areas of Egypt, with tensions flaring occasionally.

Trump: US 'very much behind' Egypt's Sisi

US President Donald Trump has said his administration will foster a "long and strong partnership" with Egypt leader Abdel Fattah al-Sisi. The Egyptian strongman has faced strong criticism over his human rights record. (03.04.2017)