Egyptian President Abdel-Fattah el-Sissi has said those fleeing Islamist militants in the Sinai Peninsula will receive support. More than 100 families have left the area in the past few days after seven killings. 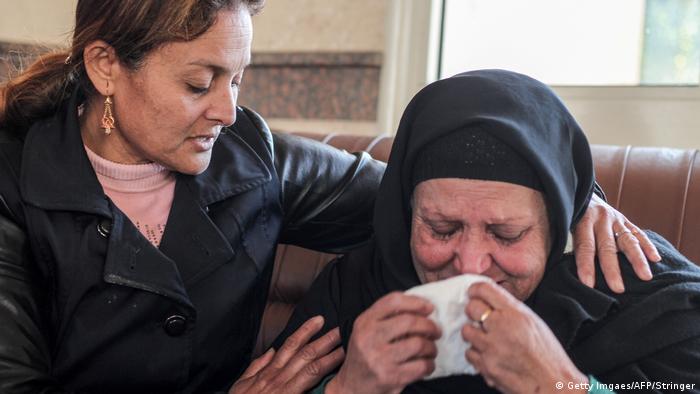 The attack on a Coptic Orthodox Church in Cairo on Sunday is a painful setback for the Christian community in Egypt. Many now wonder if President Abdel Fattah el-Sissi's government can still keep them safe. (13.12.2016)

As a testament to their faith, Egypt's Coptic Christians traditionally have a cross tattoo on their right wrist. In earlier times, this was a symbol of the hardships they faced. Today, it's a symbol of resistance. (19.06.2015)

A mass funeral has been held in Cairo for the 24 people who died when a blast tore through the main cathedral of the Coptic Orthodox Church. Egypt's president has said the attack was carried out by a suicide bomber. (12.12.2016)

Suspected Islamic State (IS) gunmen are reported to have killed 12 Egyptian soldiers in North Sinai province and injured eight more in an attack on a checkpoint. It is the first major attack in the area. (14.10.2016)

More than a dozen members of its security forces have died in a mortar attack in North Sinai, Egyptian authorities said. IS claimed responsibility for the attack and disputed the official version of events. (19.03.2016)

Egyptian President Abdel-Fattah el-Sissi was cited by the "Egypt Independent" newspaper and Coptic Christian websites as ordering the government to provide immediate shelter to those who have left the peninsula in recent days.

He said the country's Coptic Christian minority was being "targeted as part of a cowardly plot," after seven Christians were killed in suspected jihadi attacks in less than a month.

A total of 450 people who have fled North Sinai, with many families receiving assistance from the local church and other faith communities in the northeastern city of Ismailia, the news agency EFE reported.

Church volunteers arranged for the displaced families to be taken to shelters and camp in the province, and expect more families to arrive in the next day or two.

Germany's ambassador to Egypt, Julis Georg Luy, described the outflow as a "terrorist attack," the newspaper "Daily News Egypt" reported. He spoke ahead of a visit to Cairo by German Chancellor Angela Merkel on Thursday.

The uptick in violence coincided last week with the release of video by an "Islamic State" (IS) group affiliate calling for attacks on Egypt's Copts.

IS has been waging an insurgency in Sinai since the overthrow of longtime Egyptian leader Hosni Mubarak in 2011. 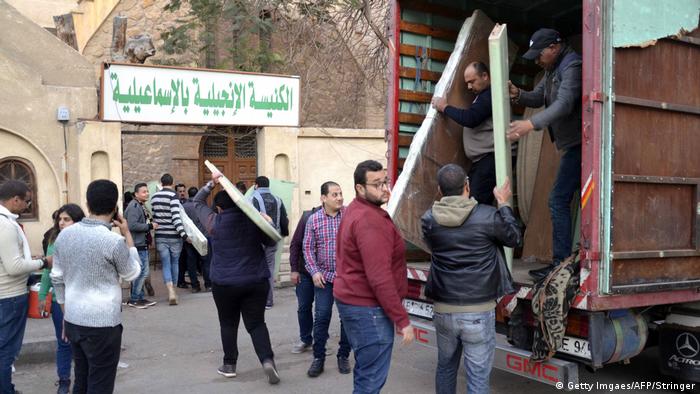 Sissi on the defense

In parliament on Tuesday, el-Sissi defended the nation's fight back against IS militants amid complaints that Copts aren't given sufficient protection from security forces in the restive region.

"[The attacks aim to] destabilize the fabric of Egypt... to give the impression that one group isn't protected as it should be," el-Sissi said in remarks broadcast on television late on Tuesday.

He noted that "some accuse the state of not helping them," warning that the country was "beginning to disunite."

El-Sissi said Egypt was bearing a "huge cost" in battling IS, and paid tribute to army and police "martyrs" killed in north Sinai.

The president, a former army chief, said security services were doing their utmost to protect civilians in the region.

Copts, who make up about 10 percent of Egypt's population of 90-million, say they are sidelined in both the education system and state institutions.

Jihadis and Islamists accuse them of supporting the military overthrow of Islamist former President Mohamed Morsi in 2013, which ushered in a deadly crackdown on his supporters.

In December, an IS militant detonated an explosive vest in a Coptic church in Cairo, killing 29 people.