The so-called "Islamic State" (IS) has claimed responsibility for Sunday's attack on the main cathedral of Cairo's Orthodox Church. The blast killed 24 people and wounded at least 45. 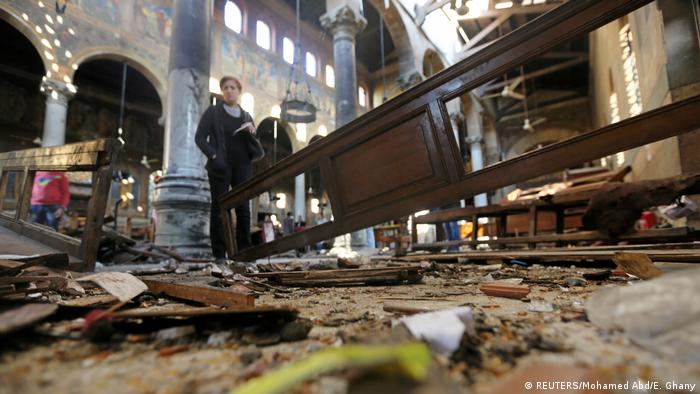 A mass funeral has been held in Cairo for the 24 people who died when a blast tore through the main cathedral of the Coptic Orthodox Church. Egypt's president has said the attack was carried out by a suicide bomber. (12.12.2016)

Between the fronts - Christians in Iraq

Christians in the "Virgin Mary" refugee camp do not want to return to Qaraqosh. Even though the city has been liberated, it is devastated and mistrust of security forces is high. Birgit Svensson reports from Baghdad. (07.12.2016)

The attack on a Coptic Orthodox Church in Cairo on Sunday is a painful setback for the Christian community in Egypt. Many now wonder if President Abdel Fattah el-Sissi's government can still keep them safe. (13.12.2016)

IS identified the suicide bomber by the pseudonym Abu Abdallah al-Masri in a statement published Tuesday by its Amaq news.

The Islamist militant group described the perpetrator as "a martyrdom seeker of the Islamic State."

"Every infidel and apostate in Egypt and everywhere should know that our war ... continues," the statement read.

During a funeral mass for the victims on Monday, Egypt President Abdel Fattah al-Sisi had named the suicide bomber as Mahmoud Shafik Mohamed Mostafa. The interior ministry said Mostafa had been identified after DNA tests from retrieved body parts matched that of his family.

Authorities have arrested four other suspects in connection with the bombing, Sisi said on Monday. Egypt's interior ministry said they are searching for other suspects.

Earlier on Tuesday, the Egyptian government released footage said to be of the alleged attacker. The CCTV footage was recorded from outside a chapel adjacent to St Mark's Cathedral, the seat of Pope Tawadros II, where the bombing took place.

Egyptian Christians speak out against government

The attack was one of the worst ever on a Christian place of worship in Egypt, a majority Muslim country.

Egypt's Coptic minority makes up some 10 percent of the population. It was largely supportive of the military overthrow, led by Sisi, of Islamist president Mohammed Morsi in 2013. IS has carried out a number of attacks since, mainly targeting security forces.

However, a number of Egyptian Christians have also accused the government of failing to protect them, a complaint that dates back many years.

Coptic Christians have been previously targeted by their Muslim neighbors. The last major attack on a church in Egypt took place in 2011 as worshippers left a New Year's service in Alexandria. At least 21 people were killed and no one was punished.

The Egyptian cell of IS is mainly active in the Sinai Peninsula on the border between Israel and the Gaza Strip. However, it has also carried out attacks on security forces in Cairo.

In June, the group claimed responsibility for the murder of priest in Sinai.