At least four people have been killed during clashes with police that broke out over a social media post. A derogatory remark about the Prophet Muhammad prompted scores of Muslims to take to the streets. 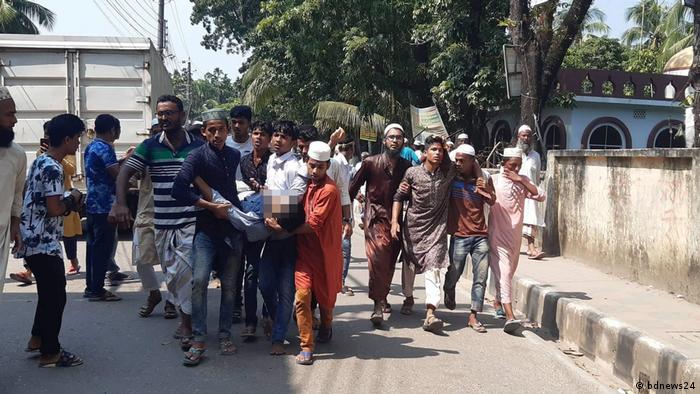 A Facebook post that criticized Islam's Prophet Muhammad sparked a riot in southern Bangladesh on Sunday that left at least four people dead.

Hundreds of Muslims took to the streets in the town of Borhanuddin, 195 kilometers (120 miles) from the capital, Dhaka, to protest the offensive social media post allegedly written by a Hindu man.

A local official said a meeting was held on Sunday to try to defuse the tensions that began Friday as the Facebook post gained traction.

But the angry protesters started attacking security officials, prompting them to retaliate.

As the protest descended into further violence, police used tear gas and rubber bullets to disperse the crowd.

"We fired blank shots in self-defense when some people started throwing stones at our officers, forcing us to take shelter in a building," said Sarkar Mohammad Kaisar, superintendent of police in Bhola.

Officials said 50 people were injured, including around 10 police officers.

Bangladesh's leading newspapers reported that around 100 people had been wounded.

The protesters, mostly conservative Muslims, were angered that the Facebook post criticized Muhammad and his youngest daughter.

"This beast has condemned our prophet and his daughter Fatima by name ... Let the almighty compel the judges to hang this person," one person wrote in a Facebook post, calling for a protest against such "arrogance."

A proposal by Bangladeshi Prime Minister Sheikh Hasina at the United Nations for resolving the Rohingya refugee crisis has been hailed by the Muslim community. Her earlier appeals have seemingly gone unheard, however. (28.09.2019)

In 2017, a Rohingya militant group attacked several police posts in Myanmar. As the army responded with brutal force, thousands of Rohingya fled to Bangladesh. Today, the militants threaten those who dare to defy them. (24.09.2019)