As investment in hydropower and construction projects ramp up, ecosystems and communities along Southeast Asia's longest river are paying the price. 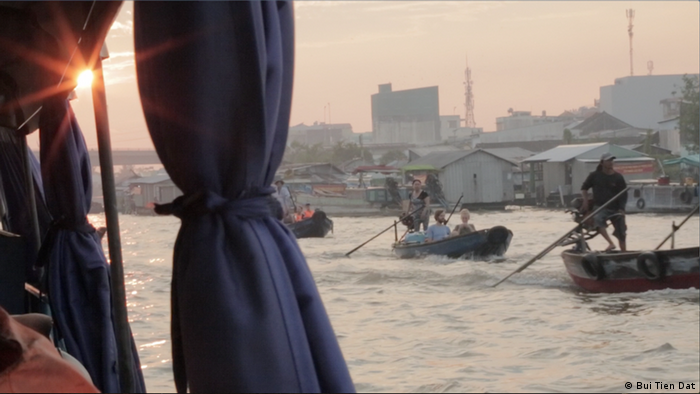 At more than 4,000 kilometers (2,500 miles), the Mekong is Southeast Asia's longest river. It runs through six countries, providing food and income for more than 70 million people.

But the integrity of the river, and therefore of the livelihood of the people who depend on it, is under threat — particularly in the lower Mekong basin in Cambodia and Vietnam. Its banks are being dug up and sand taken away for use in construction projects, and its waters are increasingly being dammed for hydropower.

"I believe that in just a few centuries, the whole delta is going disappear from the map," ecologist Nguyen Huu Thien, who has been researching the river's ecology for more than 20 years, told DW.

Sediment — the fine soil particles found at the bottom of the river — is carried by the current and deposited at the delta. This sediment provides fertile ground for plants and animals, including farming.

But over the past decades, the sediment is being carried away faster than it can be deposited. As a result, riverbanks have become unstable, leading to landslides in the lower Mekong basin. 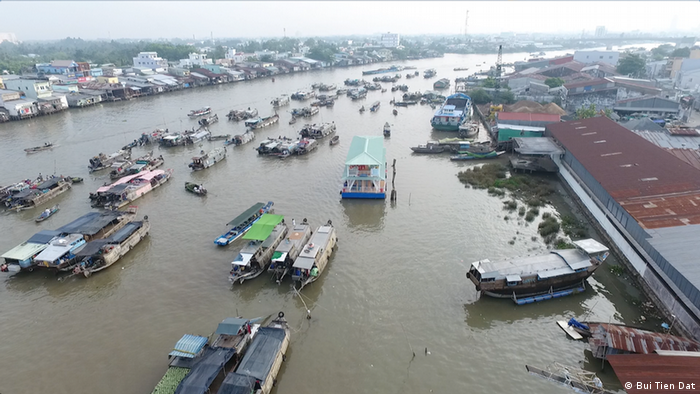 The Mekong River in Vietnam is increasingly busy — and environmentally degraded

The road to My Hoi Dong, a village in the Vietnamese province of An Giang, has been blocked since April, 2016. To Thi Kim Hupong can recall precisely what happened that day.

She was washing vegetables in the river. Cracks had earlier appeared in houses along the water, and police were helping people evacuate. "Suddenly I heard strange noises," she told DW. "It sounded like ab-ab-ab-ab-ab."

A police officer shouted for her to get out of the water immediately. Seconds later, the houses around her began to collapse. "Within five minutes, 16 houses fell into the water right in front of my eyes," she said, shuddering at the memory.

One of those houses belonged to Tran Van Bi. He arrived just in time to see its roof vanish beneath the water. "I've been living here a long time, but I've never seen anything like this," he told DW. "I think the sand mining causes these landslides."

Huu Thien thinks the same. "Sand mining prevents the sand from arriving downstream. And the most sand mines are in Cambodia and Vietnam." 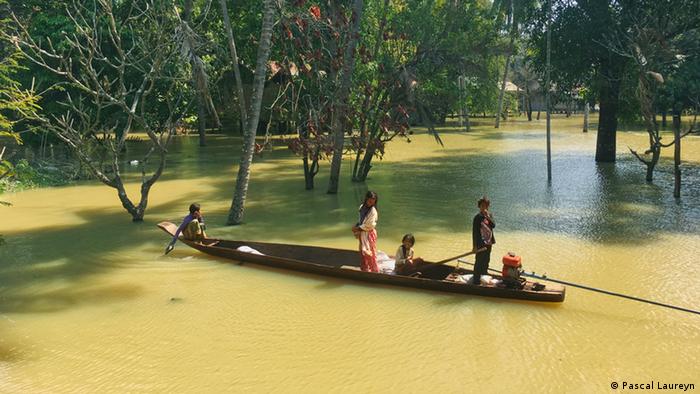 The cost of mining sand

The village of S'ang, more than a hundred kilometers upstream in neighboring Cambodia, used to be a tranquil spot on the Tonle Bassac, a tributary of the Mekong River. But some years ago, a sand mining company started digging here. Now the roar of dredging machines fills the air.

"The constant noise gives me headaches and a raises my heartrate," complained Liou Lihout, who has lived there for decades. "They don't even take a lunch break."

Lihout's neighbor, Sok-Jang, has to contend with more than just the noise. The back part of his home — including his bathroom — has collapsed. You can still see the remains of walls and some of his belongings floating in the river. "I have no place to go," he told DW.

"I took a loan from the bank to buy this house. They only started dredging after I moved in." 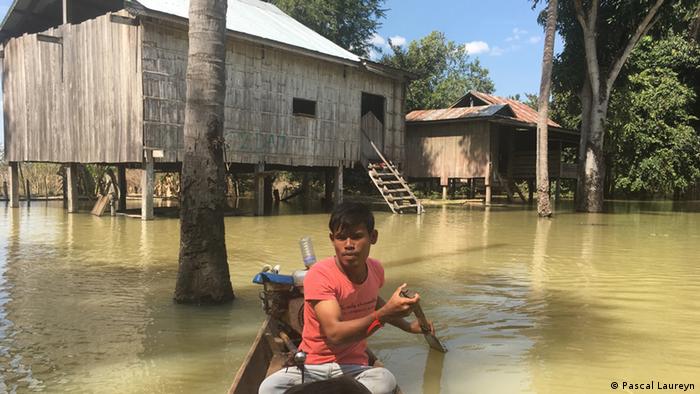 The dredged sand is being used to fill a drained lake at the site of a nearby construction project. But Meng Heng, an activist with environmental organization Mother Nature, said the miners are taking more sand than permitted.

"The official documents about the amount of sand are being forged," Heng told DW. Heng cited a 2010 report by the Global Witness, which indicated that some 700,000 tons of sand have been dredged without permission.

The Cambodian government dismissed the report as "cheap" and "rubbish," and called the allegations "malicious."

Read more: Could we run out of sand?

A Chinese-funded dam built on the Sesan, another tributary of the Mekong, caused the village of Kbal Romeas in Cambodia's Stung Treng province to flood, until the government officially classified the area as a lake and ordered residents to leave. But the people don't want to go. 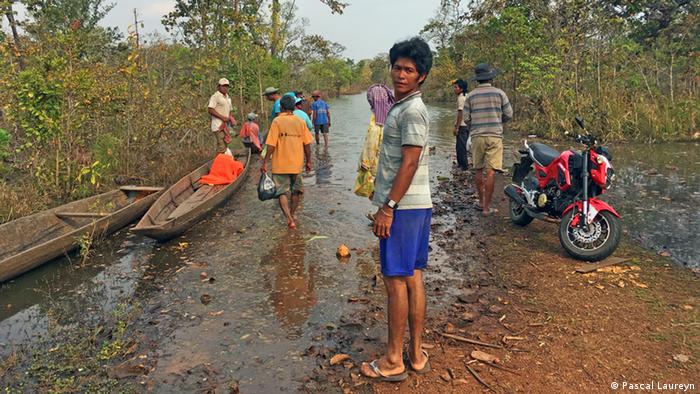 A road in Kbal Romeas disappears as water overtakes the land

Vibol used to play in the village square as a little child. Now it's flooded and abandoned.  He points at inscriptions on several houses: one reads NOLS2Dam. "No Lower Sesan 2 Dam," Vibol explained. "We'd rather die here," he explains.

The villagers don't say this lightly. Their ancestors have been buried here over generations, and abandoning them would be considered a disgrace. The cemetery looks like a scattering of tiny sheds barely emerging from the water. But villagers still come here to perform traditional rituals.

In some regions of the Mekong Delta, it's no longer possible to grow vegetables or eat fruit from the trees as water engulfs the land. There's even a shortage of fish. "Fish tend to migrate for breeding, but the dams block their migration routes. So those fish will become extinct," Heng told DW.

On the Mekong Delta in Vietnam, fisherman Duon Cong To says some of the species he caught in his youth have already disappeared. 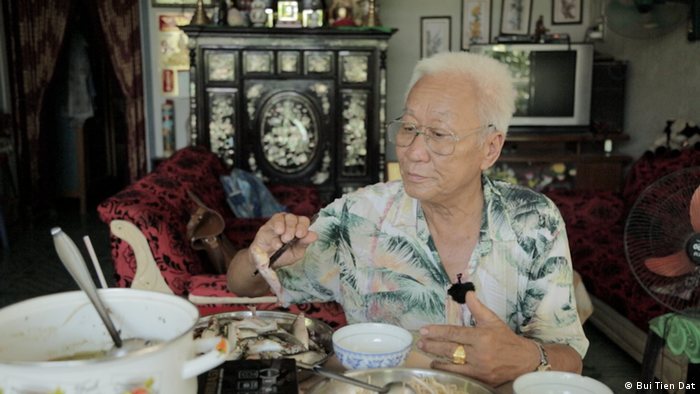 "Linh fish lives in Cambodia, but comes all the way to Vietnam to breed," he explained. "So you have to be aware of when and how to catch it."

Cong To knows plenty about the ecology of this region. But then again, he has been living off the river for the last four decades. "Living on a mountain, you know when birds sing. Living on a river, you know how fish talk," he says, reciting an old Vietnamese saying.

But with all these changes taking place along the Mekong, how long the fish will keep speaking their language? Heng fears the mighty river that has supported so many for so long will soon lose its life-giving power.

"My concern is that a lot of people live along the Mekong River," he says. "And now we see that fish and tree species are disappearing. With these changes, the lives of the people will also change dramatically."

What do houses, streets, telephones and microchips have in common? They all contain processed sand. Now African countries are raising the alarm because of their disappearing beaches. (15.02.2017)

Only 80 Mekong River dolphins remain. Conservation efforts are underway in Cambodia but these unique animals are facing a new threat from a mega dam in neighboring Laos. (02.02.2016)

Mekong power plants a threat to nature in Laos