Is Chinese investment taking over the Mekong?

China is shoring up its sphere of influence in Southeast Asia through aid and investment. By funding infrastructure and development, China can increase its economic and strategic leverage over poorer neighbors. 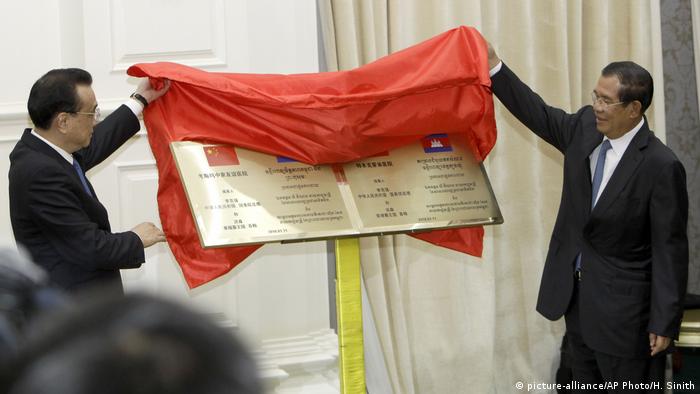 The deals included the construction of a highway linking Phnom Penh with the port city Sihanoukville and an expansion of the capital's international airport. Deals were also signed to build Cambodia's first communication satellite and for "rice trade," the Phnom Penh Post reported.

Over the past few years, China's influence in the Mekong region has increased significantly. Beijing is the largest foreign investor in Cambodia, Laos and Myanmar and has strengthened its presence in Thailand. 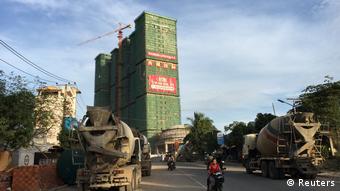 In exchange for aid and investments, China gets access to natural resources such as oil, gas and timber, and can garner support for building dams along the Mekong River. Cambodia also supports China in its ongoing territorial dispute over the South China Sea.

In Cambodia, Chinese companies are building new roads, bridges and skyscrapers, including the multimillion-dollar One Park project in Phnom Penh. The project includes condominiums and business high-rises being built on reclaimed land that used to be Boeung Kak Lake.

The eviction of thousands of people has led to ongoing protests. The area is being developed by the Chinese companies Graticity Real Estate Development and China State Construction Engineering Cooperation. 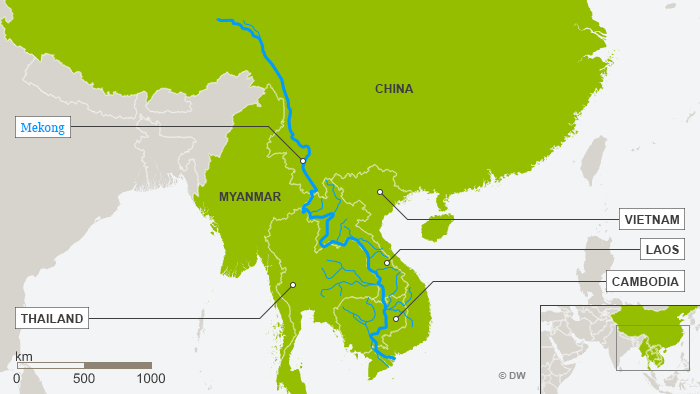 China's influence in the Mekong region has increased significantly

Diminishing influence of the West

For many years, Cambodia has largely depended on financial support from Western countries. This is changing and Chinese aid and loans to Cambodia now far exceed those of the US.

And contrary to the West, China doesn't set conditions when it comes to protecting human rights and democracy. With Beijing on his side, Cambodian PM Hun Sen has criticized the West and accused the US of attempting to overthrow his government.

Carl Thayer, a Southeast Asia expert with the University of New South Wales in Australia, told DW that Cambodia "will continue to embrace China" and that mainland Southeast Asia "will be drawn more into China's orbit."

Cambodia is not the only country in the region coming under greater Chinese influence. Thailand and Laos are important links to the Belt and Road Initiative, a major infrastructure project spearheaded by Beijing that will connect China with the rest of Asia, Europe, the Middle East and Africa.

In Laos, China has started construction on a new railroad that will connect the Chinese city Kunming with Vientiane and eventually with Bangkok, Kuala Lumpur and Singapore. China has high expectations for Laos' development, with Chinese companies flocking to the country, building roads, shopping malls and even an entire satellite city near Vientiane.

"We will see China step up its Belt and Road Initiative in mainland Southeast Asia," Thayer predicts. "China will fund infrastructure development in Vietnam, Laos and Cambodia. The net effect will be to increase Chinese commercial and political influence in these countries," he said.

China's political influence is apparent in the South China Sea dispute, where several countries are contending with Beijing over the territorial status of waters and islands. Because China has the support of Cambodia, the Association of Southeast Asian Nations (ASEAN) has failed to create a united stand against Beijing's position.

Jonathan Spangler, director of the South China Sea Think Tank, told DW that Beijing can influence ASEAN decisions by controlling a few of its members. "This strategy has been particularly effective in relation to South China Sea issues, as ASEAN's disunity continues to hinder its members from agreeing upon a meaningful plan for dispute management or resolution."

DiminishedUS strategic leadership in the region also pushes Mekong states to turn to China, although Carl Thayer has said there are signs that this may change. The US recently announced, as part of its national security policy, that Washington is committed to improve ties with its traditional allies in the region, Thailand and the Philippines, as well as with Vietnam, Indonesia, Malaysia and Singapore.

Thayer believes this could have mixed implications for the Mekong countries. "On the plus side, they could benefit from investment in high-quality infrastructure that promotes economic growth," he said. "On the other hand, the states of the Lower Mekong could become a cockpit where US-China rivalry plays out."