The Tibetan spiritual leader told Dutch TV he has known about the sex crimes in Europe since the 1990s. He was presented with written accounts from 12 alleged victims from Belgium and the Netherlands. 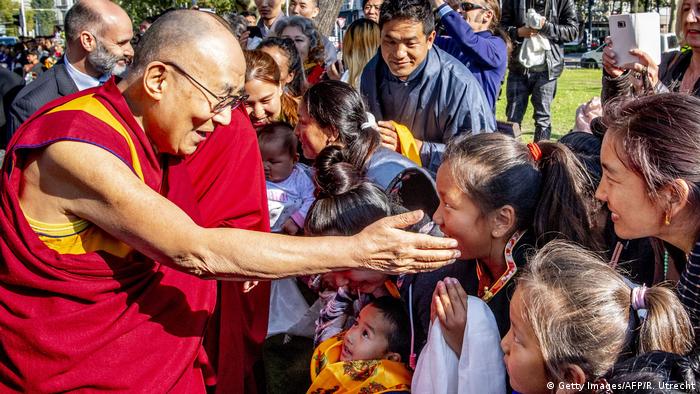 The Dalai Lama, during a four-day visit to the Netherlands, has confirmed he was informed about sexual abuse by Buddhist teachers against their followers in Europe.

"I already did know these things, [it's] nothing new," the Dalai Lama said in response to a question on Dutch public television NOS late on Saturday.

"Twenty-five years ago... someone mentioned about a problem of sexual allegations" at a conference for western Buddhist teachers in Dharamshala, a hill town in northern India, he added.

Twelve of the victims, who alleged they were abused physically and psychologically by Tibetan Buddhist teachers in the Netherlands and Belgium, had launched a petition asking to meet the 83-year-old during his trip.

A group using the hashtag "metooguru" gathered some 1,300 signatures so he could receive their collection of testimonies.

"We found refuge in Buddhism with an open mind and heart, until we were raped in its name," the alleged victims said in their petition.

On Friday, the Tibetan spiritual leader met four of the victims for about 20 minutes at a hotel in Rotterdam.

Following their meeting, they said the Dalai Lama had pledged to bring up their cases at a meeting of Buddhist teachers in November.

Ricardo Mendes, who said he was physically abused as a child being raised in a Buddhist sect in Belgium, said he was pleased the spiritual leader appeared moved by their accounts. Another victim, however, said she was a bit disappointed.

The Dalai Lama, who lives in exile in Dharamshala, told NOS people who commit sexual abuse "don't care about the Buddha's teaching. So now that everything has been made public, people may [be] concerned about their shame," he said.

Speaking about the November meeting, he added: "At that time they should talk about it ... I think the religious leaders should pay more attention."

The Dalai Lama "has consistently denounced such irresponsible and unethical behavior," according to one of his representatives in Europe, on Friday.

A former Thai monk's lavish lifestyle, involving a private jet and designer items, has resulted in a 114-year sentence for an array of fraud-related crimes. He is also accused of having sex with a minor. (09.08.2018)

The more than 1,300-year-old monastery is one of the most sacred locations in Tibetan Buddhism. The cause and the extent of the damage remain unclear. (18.02.2018)

Buddhist-driven anti-Muslim sentiment is widespread in Sri Lanka, Myanmar and Thailand. What is behind the hateful rhetoric, and what can authorities do to try to alleviate the tension? (27.03.2018)

Police in China are investigating one of the country's most prominent monks over allegations he sexually assaulted nuns at his monastery in Beijing. The case has galvanized China's fledgling #MeToo movement. (23.08.2018)

The Dalai Lama has expressed an interest in visiting US President-elect Donald Trump, who he says will likely align his future policies with global realities. It is a meeting that would not go down well in Beijing. (23.11.2016)