The more than 1,300-year-old monastery is one of the most sacred locations in Tibetan Buddhism. The cause and the extent of the damage remain unclear. 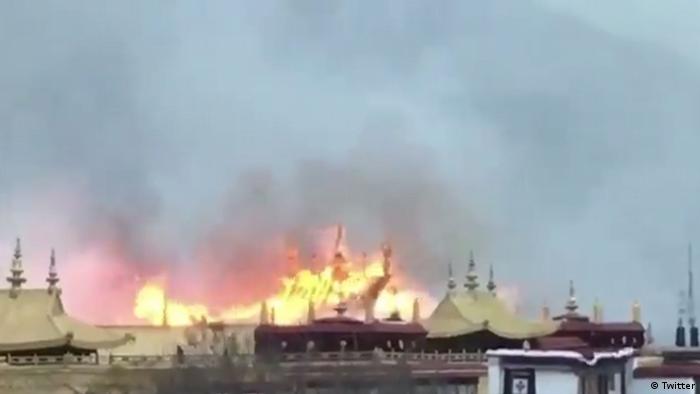 A fire broke out on Saturday at Lhasa's Jokhang Monastery, one of the holiest sites for Tibetan Buddhism.

There were no reports of any casualties and the extent of the damage was unclear.

The official Tibet Daily said part of the more than 1,300-year-old monastery, a UNESCO World Heritage Site, caught fire in the early evening.

"The fire was quickly extinguished, there are no casualties and order is normal in its environs," the newspaper said on its WeChat account.

The streets around the monastery were temporarily closed after the fire and but have been reopened to pilgrims, the state Xinhua news agency said on Sunday.

The area has been the site of past protests against Beijing's presence in Tibet.

Some Tibetans abroad alleged that Chinese authorities were censoring any photos or news about the blaze.

Robert Barnett, a London-based Tibetologist, tweeted that sources in Lhasa "claim police have threatened anyone distributing pictures or unofficial news about the fire."

Jokhang monastery is home to one of Tibetan Buddhism's most venerated icons, the Jowo Shakyamuni — believed to be one of just three statues crafted during Buddha's actual lifetime, depicting him at age 12.

The Dalai Lama arrived in a disputed region on the India-China border on Wednesday. The Tibetan spiritual leader's appearance in India's northeast, however, is rubbing Beijing the wrong way. (05.04.2017)

The Dalai Lama is revered all over the world. The Nobel peace laureate is one of the most respected global personalities. His birthday is being celebrated in many parts of the world, but not in Tibet. (03.07.2015)

China has staged a celebration of the 50th anniversary of the founding of the autonomous region of Tibet. A key human rights group criticized the festivities, saying they were part of a propaganda campaign. (08.09.2015)

Richard Gere is into German politics