Buddhists fan flames of Islamophobia in Southeast Asia | Asia | An in-depth look at news from across the continent | DW | 27.03.2018

Buddhist-driven anti-Muslim sentiment is widespread in Sri Lanka, Myanmar and Thailand. What is behind the hateful rhetoric, and what can authorities do to try to alleviate the tension? 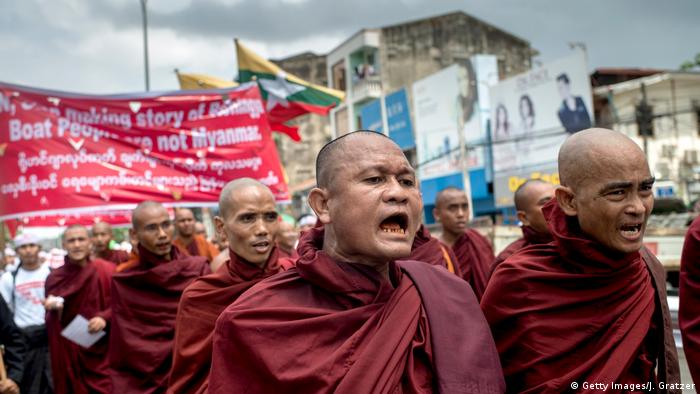 Sri Lanka was in a state of emergency for almost two weeks in response to days of clashes that erupted around the country after a Buddhist was attacked and seriously injured by four Muslims near the popular tourist town of Kandy. Radical Buddhists, including the nationalist organization of monks known as Bodu Bala Sena (Buddhist Force), took to social media to mobilize supporters.

Their messaging included conspiracies that Muslims were lacing food and clothing with contraceptives to eradicate Buddhists. A number of mosques, homes and Muslim businesses were destroyed during the clashes, in which two people were killed. As a result, the government imposed a curfew and blocked social media for 12 days.

Myanmar, too, has been the scene of repeated violence against Muslims since 2012. Although a number of Muslim groups have been targeted, the Muslim-minority Rohingya community has been most severely affected. Hundreds of thousands of Rohingya have been forced to flee Myanmar since 2017. Radical Buddhist monks have played a key role here, too.

Since 2001, Thailand has also been the scene of repeated violence, especially in its southern provinces. The Thai newspaper Bangkok Post reports that at least 6,500 people were killed in the those Muslim-majority provinces between 2004 and 2015. 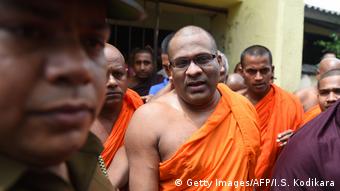 In contrast to Sri Lanka and Myanmar, a number of well-organized Islamic militant groups are actively fighting for the establishment of an independent Islamic caliphate in southern Thailand. The Thai government has responded with a heavy hand. Groups such as Human Rights Watch have documented numerous human rights abuses on all sides of the conflict. Nine in every 10 victims of violence in the region have been civilians.

As in Sri Lanka and Myanmar, Buddhist monks are part of the conflict in Thailand. For instance, Thailand has a number of so-called soldier monks who spend time in monasteries, take up the robe and the alms bowl of the order, yet do not put down their arms.

In October 2015, the popular Thai monk Phra Maha Apichat took to Facebook to proclaim that a mosque should be burnt to the ground for each Buddhist monk killed in the conflict. He has since been expelled from his monastic community.

Although it is clear that such radical monks in all three countries are in the minority, it is a vocal minority.

Religious studies professor Michael Jerryson of Youngstown State University in the United States says Buddhists in Sri Lanka, Myanmar and Thailand are worried. "I've heard from monks in all three countries that they see Buddhism being under threat" and fear "Islam and Muslims are trying to take over their country," he told DW. 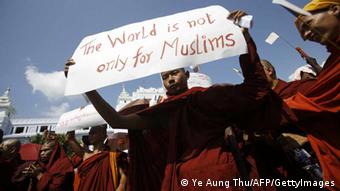 Buddhist monks in Myanmar regularly protest against the Rohingya

In part, those fears can be traced back to the particular histories of each country, in which Theravada Buddhism is the dominant religion. Adherents of Theravada claim that it is the oldest form of Buddhism and thus the one with the closest relationship to the teachings of Buddha.

Myanmar and Sri Lanka both were under British control during the age of European colonialism. "When the British colonized these countries they disrupted a historically supported state-Sangha (the Buddhist community) relationship," said Jerryson. Although Thailand was not colonized, it was surrounded by French and British colonies and feared losing its independence. "[People] asked, who is going to protect Buddhism?"

That fear led to the formation of movements linking the ideas of nationalism, imported from Europe in the early 20th century, to Buddhism in the fight for independence and, ultimately, to save Buddhism. Although the fundamental reasons and political factors for such movements were different in each country, according to Jerryson the result was the same: "a more robust form of religious nationalism and religious identity in the form of Buddhism." To this day, it is impossible to separate national identity from the religious belief that dominates each country: "To be a true citizen of Myanmar means to be a Buddhist."

Thus the Buddhist belief that it is under threat is deeply rooted and is an integral part of Buddhist identity. Jerryson said anti-Muslim sentiment is in part fueled by "a transnational Islamophobic rhetoric coming from the West" and can be found in Sri Lanka, Myanmar and Thailand. "[Many people in the West] do see religion like Buddhism as being peaceful whereas a religion like Islam being violent which is unfortunately incorrect," he explained. "And I think this damages the people and their history and cultures." 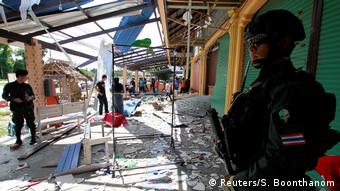 Thailand has struggled with religious violence in its southern provinces

"Every global religion has instructions, has doctrine that encourage people towards peaceful interactions and peace within themselves," Jerryson said. "But every religious system including Buddhism has histories of violence."

Those who measure a sense of threat by what is happening in Sri Lanka, Myanmar and Thailand must eventually come to the conclusion that the concept is flawed, said Jerryson: "It simply doesn't fit, it doesn't fit at all."

Only about 10 percent of Sri Lanka's 20 million citizens are Muslims; in Myanmar that number is roughly 4 percent (of 51 million residents) and in Thailand it is about 5 percent (of 67 million residents). "These population sizes have not changed dramatically for over four decades," said Jerryson

Thus, the widely propagated claim that Muslims are overtaking Buddhists demographically is incorrect, although it is true that Muslim populations are growing in some regions. Such demographic changes have been brought about by, for instance, the fact that large numbers of Buddhists have fled southern Thailand due to increasing violence. In Rakhine State in Myanmar, Muslim birthrates are also higher than those of Buddhists.

Jerryson believes that a counternarrative is needed to alleviate growing tensions between Muslims and Buddhists. The establishment thereof faces two major hurdles, however. First among them is the authority of Buddhist monks. People believe what the monks tell them, he said: "The counternarratives need to come from those who are seen to have power within those cultures."

The second obstacle, according to Jerryson, is the fact that Western politicians, NGOs and journalists seem to be forcing Burmese, Singhalese and Thais to accept a predominantly Western counternarrative, and that this often has the opposite of its intended effect. "We need to start working more at negotiating, talking with Buddhist monks in these countries who are seen as having the authority to provide narratives and counternarratives," he said.