Myanmar is continuing its ethnic cleansing of Rohingya, a UN envoy said after visiting refugees in Bangladesh. Some 700,000 Rohingya Muslims have fled Myanmar since late August to escape violence and persecution. 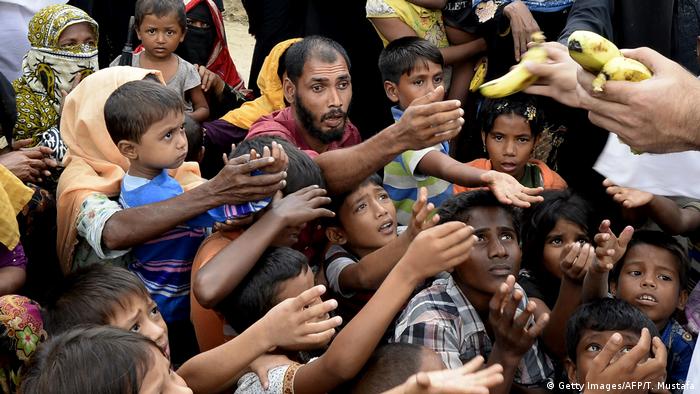 Myanmar has launched a "campaign of terror and forced starvation" against Rohingya Muslims in Rakhine state as it carries on its ethnic cleansing of the minority group, a UN human rights envoy said on Tuesday.

Nearly 700,000 Rohingya have fled to neighboring Bangladesh since late August to escape military and civilian reprisals in the state.

"I don't think we can draw any other conclusion from what I have seen and heard in Cox's Bazar," referring to the Bangladesh district that is home to most of the refugees.

"The nature of the violence has changed from the frenzied bloodletting and mass rape of last year to a lower-intensity campaign of terror and forced starvation that seems to be designed to drive the remaining Rohingya from their homes and into Bangladesh," Gilmour said.

The Rohingya, a vast majority of whom are Muslims, have been denied citizenship rights. They are viewed by the local authorities as illegal immigrants from Bangladesh, although many have been living in the region for decades, if not centuries. Myanmar's Buddhist majority is often accused of subjecting them to discrimination and violence.

How Myanmar can guarantee Rohingya security

Gilmour said the ongoing violence makes it impossible to send Rohingya refugees in Bangladesh back to Myanmar.

Myanmar and Bangladesh have agreed to repatriate the Rohingya refugees within two years but most human rights advocates say it is unsafe now to send back the refugees.

Myanmar's government has built two reception camps and a transition camp for Rohingya refugees in northern Rakhine. But Gilmour said the authorities should first stop the ongoing violence.

"The conversation now must focus on stopping the violence in Rakhine state, ensuring accountability for the perpetrators, and the need for Myanmar to create conditions for return," said Gilmour.