Myanmar's army is building up bases and roads in villages formally occupied by Muslim Rohingya, according to Amnesty. The report throws into doubt Myanmar's promise to securely repatriate thousands of Rohingya refugees. 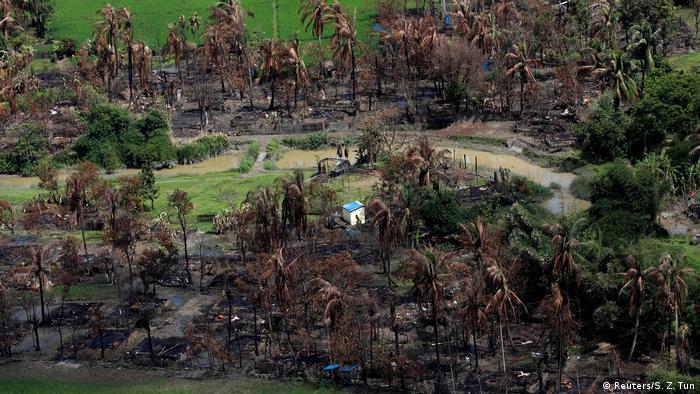 A scorched Rohingya village near Maungdaw, north of Rakhine state

In a new brief entitled "Remaking Rakhine State," Amnesty analysts found that new military bases, helipads and road networks were being constructed on top of villages that were destroyed during the military's scorched-earth campaign against the Rohingya.

The report uses satellite images that reveal the rapid increase in military infrastructure being built on top of flattened villages. Analysts say the build-up amounts to a land grab.

"What we are seeing in Rakhine State is a land grab by the military on a dramatic scale," said Amnesty's Crisis Response Director Tirana Hassan. "New bases are being erected to house the very same security forces that have committed crimes against humanity against Rohingya."

Monday's findings follow a report published by Human Right Watch last month, which found that the military was bulldozing Rohingya villages that were either burnt down or abandoned last summer.

The Myanmar military launched a violent crackdown against the country's Muslim minority in August, after a Rohingya insurgent group attacked several security outposts in Rakhine. The military's scorched-earth campaign was widely denounced internationally and likened by several rights groups to an "ethnic cleansing campaign."

The reports underscores fears that Myanmar could be setting the land aside for ethnic Rakhine Buddhists and other non-Muslim groups, or that it hopes to erase any evidence of the alleged atrocities that occurred during the crackdown.

Amnesty's findings will likely cast major doubts over the Myanmar government's pledge to welcome back Rohingya refugees who fled across the border in Bangladesh during the crackdown.

Some 700,000 Rohingya refugees are estimated to be living in refugee camps in Bangladesh, where aid and basic supplies remain scarce.

Myanmar's government had pledged to securely welcome back Rohingya refugees. A repatriation agreement with Bangladesh was supposed to come into force in January. However, many refugees are reluctant to return home without the guarantees concerning their rights and safety.

Myanmar government spokesman Zaw Htay denied that the military was building bases in Rakhine, insisting that the bulldozing was to clear burnt villages in order to develop new settlements.

"It's not true that the army is building bases in the region," Htay told the AP news agency. "There are only police posts for regional security and law enforcement reasons."

"We are going to build new villages and new homes and resettle people there according to the village planning," he added.

Five years after fleeing Myanmar, Rohingya people are still living in Bangladeshi camps. While the memory of persecution is still strong, they say they want a safe way back to their homeland.