Bohuslav Sobotka has said Merkel's policies are partly to blame for the refugee crisis. He also reiterated the Czech Republic's commitment to helping the EU mitigate the crisis. 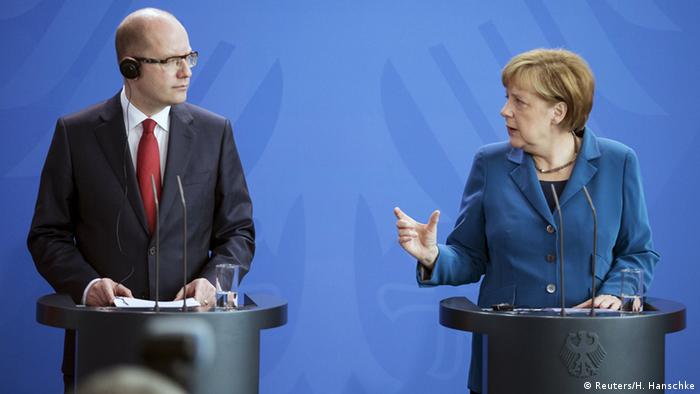 Sobotka criticized German Chancellor Angela Merkel on Wednesday for saying that Germany would take in an unlimited number of refugees, insisting it has led to deep divisions across Europe.

"Germany sent a signal that was seen and heard in many parts of the Middle East and North Africa. That has spurred illegal migration toward Europe," the Czech prime minister said in an interview with German daily Süddeutsche Zeitung.

Sobotoka emphasized regardless that his country was working in solidarity with the EU on the refugee issue. "We are in solidarity," he said. "We have sent police to Slovenia, Hungary and Macedonia. We have granted humanitarian aid to Slovenia, Croatia and Serbia."

"No one from Brussels had to force us to do these things," he added.

"We reject the pressure to accept a centrally managed migration policy, which only strengthens the radicals and can damage the idea of Europe," he said.

The leader also rejected Austrian Prime Minister Werner Faymann's threat to cut EU funding for member states that don't comply with his refugee policy. "So an argument only continues to split Europe," he said.

Report: One million migrants and refugees reach Europe in 2015

The International Organization for Migration (IOM) has said that more than one million migrants and refugees have crossed into Europe this year. European leaders are continuing to grapple with their redistribution. (22.12.2015)

The EU agreed to resettle tens of thousands of refugees from overburdened southern European countries. The result has been meager, with a mere 133 people relocated from Italy, as Megan Williams reports from Rome. (10.12.2015)