The Czech nuclear regulator has cleared the way for the construction of new reactor units at the Dukovany nuclear power plant. But the government's nuclear plans face opposition from many sides. 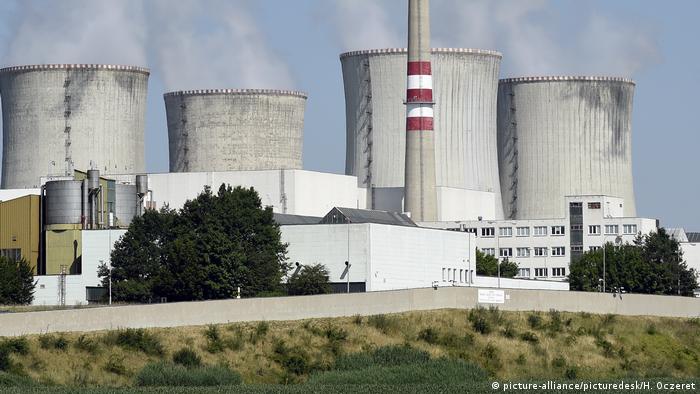 After 12 months of assessment, the head of the Czech State Office for Nuclear Safety gave the green light for construction, saying there were no facts that would have stood in the way of expanding the Dukovany nuclear power plant.

The plant is located around 100 kilometers (62 miles) north of the Austrian capital, Vienna, and about 200 kilometers east of the German city of Passau.

According to the government's plans, the first new reactor is to be connected to the grid between 2035 and 2037. The costs for this are estimated at around €7.5 billion ($8.9 billion).

The contract for the planned two new reactors hasn't been awarded yet, after Czech lawmakers forced yet another delay of the third and final reading of "Lex Dukovany," a bill that would pave the way for a tender on a new reactor at the Dukovany nuclear power plant.

The legislation, which officially aims at setting out the conditions for the country's low-carbon energy transition, has been postponed twice so far this year as the opposition, and the center-left CSSD party — a junior partner in the minority coalition government — seek amendments.

They warn that in its current form, the bill threatens both national security and the taxpayer. At the same time, environmental groups claim that rather than helping the Czech energy transition, the bid to expand the nuclear fleet is holding back decarbonization.

However, the ruling Ano party, supported by the communist KSCM and far-right SPD, continues to table the same legislation. With each failure, the incongruous trio has used its slim majority to attach new conditions to the voting procedure, hoping to eventually outrun the resistance.

Following the latest setback, Karel Havlicek, minister of trade and industry and point man on the project, promised that a final tender document should be finalized in the coming weeks.

"If we really want to reach carbon neutrality, we have to understand that each member state has a different energy mix and that the costs of reaching carbon neutrality are different for each state," he said in 2019, ahead of talks on the bloc's Green Deal on which he threatened to withhold the Czech Republic's consent.

Will the EU become climate-neutral?

Will the EU become climate-neutral?

His government now hopes to add the first of up to four new units at Dukovany, one of the country's two nuclear plants, at an estimated cost of CZK160 billion (€6.2 billion, $7.39 billion). The selection of a contractor is viewed by many as the Czech Republic's biggest geopolitical test since the fall of communism.

Suitors to build the reactor include companies from the United States, France and South Korea. However, Russia's Rosatom and China are also keen.

The security services, backed by the CSSD-controlled foreign and interior ministries, caution that giving the job to Russia or China would constitute a threat to national security. The US has sent similar warnings.

Babis's government has thrown these opponents a bone by ousting China, but it is weak and depends on the patronage of the Russian-linked president Milos Zeman, who is pressing Rosatom's case.

"Zeman has tasked Babis with handing the project to Rosatom, but it is an arm of the Russian security services," says Jan Lipavsky, an MP from the opposition Pirate Party and vice-chairman of parliament's defense and foreign affairs committees. "It's unimaginable this company would get this contract."

Getting the sums right

Havlicek claims that security analysis shows that Russia is not as big a threat as China. He also insists that Rosatom is needed to make the tender more competitive.

The bidders have been waiting since 2014 when a government refusal of financial guarantees saw state-controlled energy group CEZ cancel a competition to expand Temelin, the country's second nuclear plant. After several years of arguing with the company's minority shareholders, Prague has agreed to purchase the power from Dukovany's new unit at a price that will cover the costs.

Havlicek has suggested €50 to €60 ($59.5 to $71.5) per megawatt-hour (MWh) is likely — slightly above current market prices — but nuclear experts call that "highly optimistic" given how safety and security concerns have sent the cost of building new nuclear skyrocketing in recent years.

"The problem is nobody knows how much the unit will cost," says Michal Snobr, an analyst and activist CEZ shareholder. "The government estimates CZK160 billion but projects in the EU and US suggest CZK300 billion is more realistic."

The British government agreed over five years ago to pay up to €110/MWh for the power produced by the Hinkley Point nuclear plant. Lipavsky's Pirates want the new bill to include a cap on the price the government could pay.

However, the likes of Germany and Austria, which oppose new reactors in the neighborhood, will be disappointed that the opposition is only challenging the conditions of the tender.

No parliamentary party in the Czech Republic opposes nuclear power, somewhat of a rarity in Europe. That reflects widespread public support and leaves environmentalists fighting a lonely battle against the expansion, which is the main plank in the government's long-term national energy strategy.

NGOs argue that, far from being vital for decarbonization, new nuclear power projects are actually holding back the process.

Campaigners at Hnuti Duha (Rainbow Movement) call it "striking" that political parties fail to promote renewables in the same way they do nuclear power, arguing that surveys suggest the public supports them even more than nuclear energy.

Although the government signed up to the EU Green Deal's target to cut emissions by 55% by 2030, the Czech Republic now looks set to delay dispensing with coal to 2038, matching the earliest potential commissioning of the new reactor.

The nuclear expansion will, therefore, offer no contribution to the energy mix during the phase-out. Analysis from international consultancy McKinsey shows that renewables and gas will largely need to make up the shortfalls.

"The government has not done any modeling of an energy future without new nuclear plants," says Jiri Jerabek at Greenpeace CR. It's little wonder, he adds, that the Czech Republic lacks proper support schemes for most types of renewables, thereby stunting their development.

A Czech nuclear power plant decided a bikini contest would be a good way to choose its next round of interns. Facebook users were asked to rate school graduates who posed inside a cooling tower.