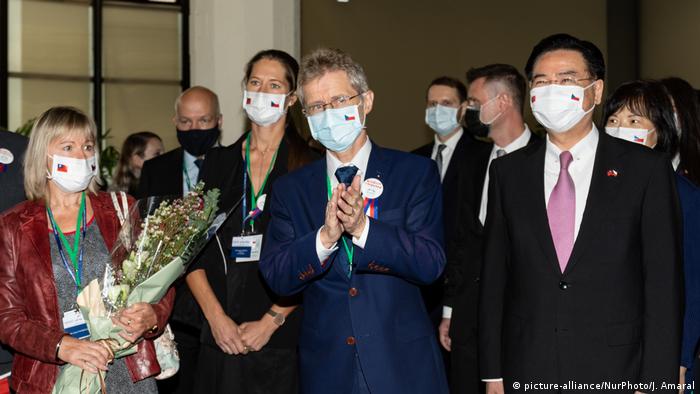 The president of the Czech Senate Milos Vystrcil led a 90-member delegation trip to Taiwan on Sunday, despite strong opposition from China. "The visit will be certainly fruitful and further deepen bilateral relations in various fields including economic and trade," Taiwan's Foreign Ministry spokeswoman Joanne Ou told dpa on Sunday.

It is the largest-ever Czech delegation visiting Taiwan since the European country became democratic in 1989. Vystrcil has said his Taiwan trip was also symbolic in how it would fulfill the legacy of the late president Vaclav Havel, a dissident leader of the 1989 Velvet Revolution which toppled communism in the former Czechoslovakia.

Senate President Vystrcil is set to deliver a speech in Taiwan's parliament and meet President Tsai Ing-wen during the five-day trip. Taiwan described the Czech visit as standing up to "the intimidation of authoritarian China."

"Our nations share many core values and we look forward to furthering cooperation in all areas," Tsai wrote on Twitter after the delegation landed.

The Czech Republic does not have formal relations with Taiwan, but the Central European country is Taiwan's fourth biggest investment destination in Europe, behind Germany, the Netherlands, and the UK.

But the Czech visit has drawn strong condemnation from Beijing. Taiwan has had an independent government since 1949, but China views it as its own territory and has vowed to one day seize it by force if necessary.

Beijing regularly reacts with hostility to any attempts by foreign governments to recognize or conduct official exchanges with Taipei and this occasion was no different.

''China condemns this despicable act and urges the Czech side to abide by the one-China principle and handle Taiwan-related issues in a prudent and appropriate manner,'' Foreign Ministry spokesman Zhao Lijian said, ahead of the visit.

China said the delegation's participants were acting out of ''their own interests.''

"His insistence to go to Taiwan to carry out this so-called 'visit' deliberately wrecks the political foundation of China-Czech relations," the Foreign Ministry added.

The Czech foreign minister said he would summon the Chinese envoy to Prague after Chinese State Councillor Wang Yi denounced Vytrcil's trip, saying that he would "pay a heavy price" for his appearance.

"The Chinese government and people will never let it go and sit back and watch, and must let him pay a heavy price for his short-sighted behaviour and political speculation," Wang said, according to a statement published on the Chinese Foreign Ministry's website.

Wang added that the Chinese government and people will not tolerate such an "open provocation" by Vystrcil and the anti-China forces behind him, though he gave no details of how exactly Beijing would react.

Czech Foreign Minister Tomas Petricek said that although the government did not support the trip, he wanted an explanation for Wang's remarks and would summon the Chinese ambassador in response.

"I expect the Chinese side will explain them [Wang's comments] to us. The trip has of course an impact on relations with China, but I think that this has crossed the line," Petricek told reporters, according to the CTK news agency.

"We are a free country seeking to have good relationships with all countries and I believe this will be the case in the future irrespective of the statement of the minister. And let me repeat again – this visit is by no means meant to politically confront anyone," said Petricek.

Bilateral relations between China and the Czech Republic were already rocky, after earlier this year the city of Prague signed a partnership agreement with Taipei that prompted Shanghai to cut ties as a sister city.

China has ramped up diplomatic, military and economic pressure on Taiwan since Tsai came to power in 2016. Tsai, who won reelection on a landslide in January, views the island as a sovereign nation and has worked to expand ties with nations, in particular with those seeking to push back on China's growing influence abroad.

Taiwan's former President Lee Teng-hui has died at the age of 97. Although he had largely dropped out of public life, Lee is credited with overseeing the transformation of the island nation into a full democracy.

Taiwan's number of COVID-19 infections is currently below 400, despite the island's proximity to the outbreak's origin on mainland China. Experts say early intervention has helped stop a public health crisis.