Chancellor Angela Merkel's Bavarian allies, the Christian Social Union, are determined to be re-born under their new leader, Markus Söder. But is he so different from his predecessor, Horst Seehofer? 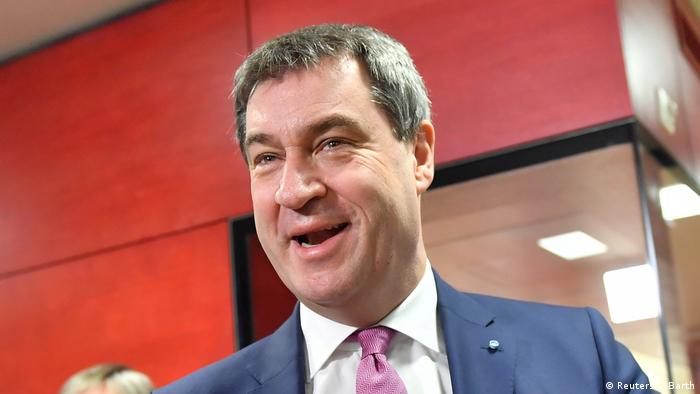 The Christian Social Union (CSU), who partner with Chancellor Angela Merkel's conservative Christian Democrats (CDU) at the national level in Germany, have finally found a resolution for their long-running and occasionally crippling power struggle.

Early next year, Bavarian Finance Minister Markus Söder will take over from the veteran party leader Horst Seehofer as Bavaria's state premier, not long after being chosen as the CSU's leading candidate in the state's crucial election in the fall. The decisions were made at a special meeting of the CSU's state parliamentarians at the weekend, after Söder had successfully fended off competition from the Bavarian Interior Minister Joachim Herrmann.

Both appointments for Söder are yet to be finalized — the Bavarian state parliament must first vote in the new premier, and the CSU party conference in mid-December must select their election candidate — but these are being seen as formalities.

The relationship between Seehofer and Söder had often been difficult, and for some analysts, Monday's compromise between the two appeared fudged — why allow Seehofer to maintain a role at all when the party's election result seemed to demand a complete renewal?

But Werner Weidenfeld, political science professor at the Ludwig Maximilian University in Munich, did not agree that the CSU had denied itself a much-needed clean break by allowing Seehofer to keep his post as party leader. "Seehofer still has a significant part of the party and the parliamentary group behind him," he said. "Just to pull out of all positions because you feel a lot of pressure from someone else, from Söder, that wouldn't have helped Söder either." 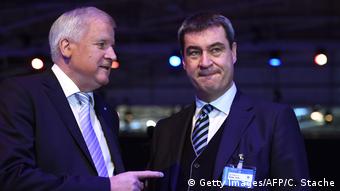 Seehofer (left) and Söder have not always been best friends

Meanwhile, the 68-year-old Seehofer is not off the scene. He remains party chairman, directing the CSU's policies from Berlin while Söder deals with Bavaria's affairs. The move also means that Seehofer, who served in ministerial roles under Chancellors Helmut Kohl and Angela Merkel, could yet retain a cabinet job in Merkel's new government.

The 50-year-old Söder, once described by Seehofer as "pathologically ambitious," welcomed his new roles with an appeal to party unity: "Politics is always a team performance, one person alone can't steer everything," he said after the parliamentarians' meeting, before going on to call for "the strongest to work closely together." He also praised Seehofer for taking the decision to resign, and reassured him that the older man would retain his full support as leader.

But the emphasis on renewal, unity, and courage masked a certain amount of insecurity in Bavaria's leading conservative party. The CSU won only 38.8 percent of the vote in September's federal election, in a state where they are used to scoring close to or even over 50 percent, at least in state elections. Should that figure repeat itself next fall, the party would be in the unprecedented and disastrous position of having to enter into a coalition in its home state.

A new man — but almost the same

September's election result put considerable pressure on Seehofer from within his own party, not least because the Alternative for Germany (AfD) took over 12 percent of the vote in Bavaria. The insurgent far-right party successfully outflanked the CSU with a populist anti-immigrant message, despite Seehofer's constant insistence that he wanted a more conservative immigration policy than Merkel — specifically an immigration cap. 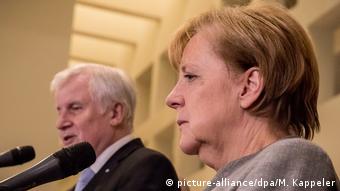 Merkel could do with a stable partner on her conservative flank

In truth, as many media outlets have noted, the personnel change at the top of the CSU is more about leadership personality than policies — seeing as politically there is little to choose from between the opinions of Seehofer and Söder.

Söder portraits have not always been favorable. He was described by Sebastian Kraft of Bavarian public radio broadcaster BR on Monday as a "power hungry" operator, careful to maintain a media presence on talk shows throughout Germany, and whose "big weakness" is only seeing things in black and white — he sees party rivals as always only "for me or against me," as Kraft wrote.

But whether that will be enough to win back voters from the AfD is another matter. "That's difficult — that will depend on the programmatic power of the CSU as a whole," said Weidenfeld. "The AfD became strong because some people didn't feel properly accepted anymore. It was a very complex situation, and the other parties weren't able to explain it. It's only when they present a plausible strategy for the future that they will win lost voters back."

As for politics at the national level, Weidenfeld says little will change for Merkel — more stability in the CSU is of course welcome, but her friction with Seehofer over an immigration cap will not simply end. "Of course Merkel doesn't have any interest in her partner the CSU just fighting with itself," he said. "But the argument and the rhetoric over immigration will stay the same."

Bavaria's Horst Seehofer, the main critic among Chancellor Merkel's conservatives on refugee policy, has decided to stay put. He says he'll stay as Bavarian CSU chairman and seek re-election as state premier in 2018. (24.04.2017)