Bitcoin was beginning to look like a better store of value than traditional currencies — even gold — until the cryptocurrency crashed 44% last month. DW unpicks the complicated world of currencies. 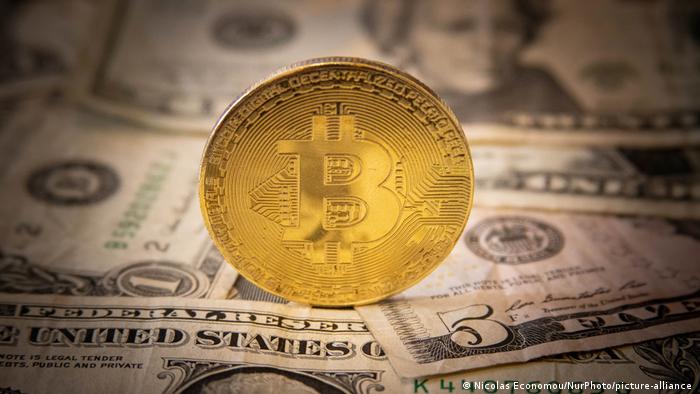 The cryptocurrency market was worth $1.7 trillion dollars until a major crash in prices over the past two months

The US dollar and the euro are examples of fiat or traditional currencies — banknotes and coins printed by governments, whose value is dependent on economic policy and the strength of a country's economy. The term fiat derives from the Latin word, meaning "let it be done."

The dollar, for example, maintains its value through the US being a global economic powerhouse. Most commodities, from oil to gold, are traded in dollars, giving the US currency so-called reserve status (most countries' central banks hold significant quantities of dollars). Similarly, the strength of the eurozone economy has boosted the value of the euro, which is the second most commonly held reserve currency.

In addition to the notes and coins in circulation, most of the fiat money supply is created digitally, either by central banks which is then credited to major banks or created by banks themselves in the form of loans to governments, businesses and consumers.

Cryptocurrencies, on the other hand, are private and operate independently of governments. Bitcoin, the most famous example, emerged in 2009 during the financial crisis amid concern about the stability of the global financial system. It quickly gained traction due to fears of political instability and governments taking on too much debt. There are currently more than 5,000 cryptocurrencies in a market worth over $1 trillion (€820 billion).

Bitcoin transactions are digitally verified through the use of blockchain technology, which isn't bound to one server but a global network of computers, making them less vulnerable to fraud. This is also the process that allows the mining of new coins, although there is a ceiling on the creation of new Bitcoins — 21 million — a figure due to be reached by 2040.

What about gold and currencies?

Many fiat currencies, like the dollar and the British pound (which was previously the world's main reserve currency), were once backed by scarce commodities like gold and silver, which helped to preserve their value.

A fiat currency can become worthless if governments print too much of it, like in the case of 1920s Germany. The country was saddled with huge debts and economic sanctions following its World War I defeat, which the government tried to pay through the mass printing of banknotes. By November, 1923, $1 was worth 4,210,500,000,000 marks.

Until the Great Depression of the 1930s, holders of dollars could in theory trade in their cash for gold stored in the US federal vaults. In 1971, US President Richard Nixon unlinked the dollar to gold, turning it into a fiat currency. At the time an ounce of gold was worth $35. Today, the price is $1,920.80.

Gold (and silver) remain popular assets, especially during economic downturns and some economists want the world's biggest currencies to return to the so-called Gold Standard.

Others say the transparent way that Bitcoin and other cryptocurrencies are "mined" makes them as reliable an investment as the precious metal and gold-backed currencies. They predict that once the full number of Bitcoins is in circulation, the digital currency could be worth $514,000.

Crypto critics point to the wild volatility in the values of Bitcoin, Ether and others, which makes it difficult for businesses to accept them for the payment of goods and services. Tesla, for example, said in March it would accept Bitcoin for the purchase of its electric vehicles but backtracked two months later.

China is currently testing its own digital currency, the digital renminbi. The United States and the European Union say it is only a matter of time before currencies go fully digital, resembling cryptos. Many financial analysts think the blockchain technology behind currencies like Bitcoin will be useful for the rollout of digital versions of existing government-backed currencies.

Bitcoin fans say the scarcity of the private currency will aid its credibility among investors, amid huge stimulus and money printing by central banks around the world in the wake of the COVID-19 pandemic. Initially, most cryptocurrencies were held by retail investors, but last year saw an influx of institutional money and the increased acceptance by merchants and online payment platforms.

But some cryptocurrency trading platforms have been shut down over investigations into fraud and money laundering, involving billions of dollars. Governments including China, India and Turkey have recently clamped down on cryptotrading, in a major setback to growth plans and public acceptance. Stronger regulation by Western governments also appears to be on the cards.

Environmental concerns, too, could hamper the growth of cryptocurrencies, due to the massive electric power needed to mine the coins and verify the transactions.

Cryptocurrencies - Worth the Ride?

Cryptocurrencies are playing an increasingly important role in the economy. Companies like Tesla accept Bitcoin as money; even asset managers recommend investing in Bitcoin. But how do they work?