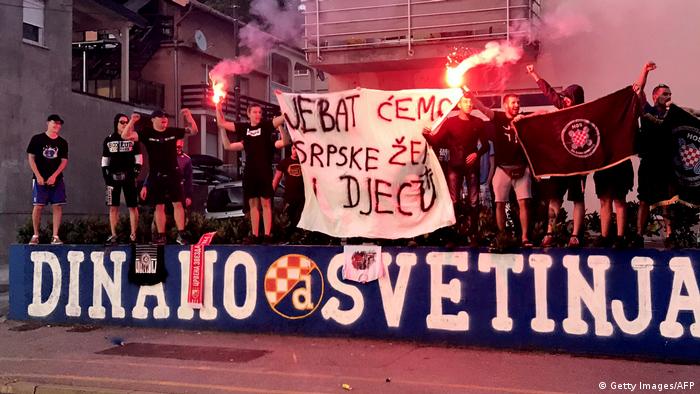 Croatian officials slammed an anti-Serb incident that saw a group of youths display a banner in the capital Zagreb reading: "We will fu** Serbian women and children."

Conservative Croatian Prime Minister Andrej Plenkovic said, "There is no place for it in a public environment," adding that the incident was "unacceptable."

Education Minister Blazenka Divjak said the event was "disgusting," according to the Beta news agency.

On Friday,  Croatian police said four people were detained over the photo of the incident, which was taken by a Croatian photographer and posted by a Serb association on Twitter. The photograph said the black-clad youths, apparently fans of the Dinamo Zagreb football club, also chanted "kill, kill the Serb" while waving torches, according to AFP.

Right-wing groups in Croatia routinely use anti-Serb slogans and messages to target the Serbian minority in the EU country. Mainstream politicians also often invoke the memories of the 1990s war that pitted Croatian independence fighters against Serb-dominated pro-Yugoslavia forces. At the time, parts of Croatian forces used symbols and slogans of the World War II Ustasha militia. The Ustasha had conducted a campaign of genocide under the supervision of Nazi Germany, which was mostly directed at Serbs living in Croatia.

The same symbols were also displayed by the group of about a dozen football fans in Zagreb on Thursday. In the message on the banner, the letter "U" was stylized as the Ustasha emblem, and some of the black-clad men were also flying the flags bearing the Ustasha salute "For home(land) ready." The slogan was used by Ustasha as a Croatian equivalent to the Nazi "Sieg Heil."

Despite Croatia's 2013 entrance to the EU, the country has seen a rise of racist and neo-fascist sentiment. In 2016, a plaque bearing the Ustasha slogan was placed at the site of the Jasenovac concentration camp and was only removed after public pressure several months later. Top ranking government officials are also a common sight at the Bleiburg memorial event in Austria, which Austrian activists describe as  "the largest neo-Nazi congregation in Europe."

Last month, the Croatian parliament endorsed the controversial mass dedicated to Bleiburg victims in Sarajevo. When DW contacted the German embassy in Zagreb for comment on the Sarajevo mass and the ensuing protests, a response made it clear that the ambassador was "not available for this topic."

The German Foreign Ministry did respond to a DW query, calling for "dialogue" between different "social and political forces in Bosnia & Herzegovina and the region."

"It is only with dialogue that the urgently needed social reconciliation can be promoted," they wrote in an email.

Thousands travel to Austria's Bleiburg every year for a memorial which local activists have dubbed the "largest neo-Nazi congregation in Europe." Catholic officials in Austria and Croatia are now split over the event. (12.03.2019)

Italy are yet to concede a goal from open play in normal time at Euro 2020 and go into Tuesday's semifinal against Spain as favorites. But, if La Roja are to break them down, then RB Leipzig's Dani Olmo will be key.