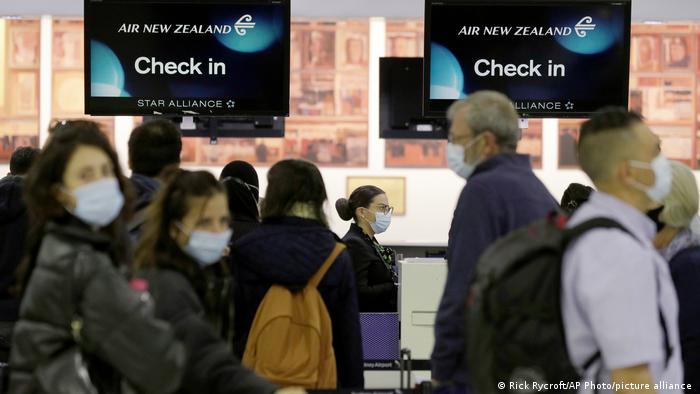 The first restriction-free travel bubble since the pandemic hit, showed an unusually high number of travellers departing from Australia to New Zealand

New Zealand Prime Minister Jacinda Ardern told reporters the virus was detected in a person who boards aircraft to clean them after they have arrived carrying passengers from countries considered COVID-19 "red zones."

The infected worker was fully vaccinated for the virus.

"When we opened, on both sides, we of course knew that we would continue to have cases connected to our border," she said.

What is the travel bubble?

Following months of negotiations between the largely coronavirus-free neighbors, the "trans-Tasman travel bubble" allows Australians and New Zealanders to visit each others' country without any restrictions.

"It is truly exciting to start quarantine-free travel with Australia. Be it returning family, friends or holidaymakers, New Zealand says welcome and enjoy yourself," Jacinda Ardern said.

Although people arriving from New Zealand have been able to travel to parts of Australia without quarantine since October, Monday was the first time that people could travel, or return, to New Zealand without going into controlled, two-week isolation.

Auckland Airport split its international terminal into two zones ahead of the bubble opening. Arrivals heading into managed isolation or quarantine are kept separate from those on quarantine-free flights from Australia, the Cook Islands and Niue.

Is the travel bubble a role model for others?

Jane Halton, a commissioner on Australia's COVID-19 advisory board and a former health and finance minister, told DW how important the reopening of travel between New Zealand and Australia was.

"I think everyone's been feeling very constrained, shut down, hemmed in, and the opportunity to actually go somewhere for a holiday [...] is something that now seems such a luxury that it's made an enormous difference to people's psychology."

Whether the system could be a role model for others remains unclear, as Australia and New Zealand have the "enormous advantage" of being islands and therefore being able to shut borders "and then control travel by instituting quarantine," Halton said.

"I think in the future, rapid action in public health, rapid attention to getting viruses wherever they first emerge under control — and ideally eliminated — is exactly what we should be learning for the future."

What does the new case mean for the bubble?

Despite showing leaks in the travel bubble, Ardern said both Australia and New Zealand expected to handle border cases and had systems in place to do that without closing off the long-awaited freedom of movement.

"We accept there will be cases and that is part of our journey together, for both sides," she told reporters.

Both countries have been praised for their handling of the pandemic.

Australia until Tuesday recorded 910 deaths since it the pandemic began last year, while New Zealand has reported only 26.