The coronavirus pandemic is still far from over, top health officials have warned. Digital vaccine passports to facilitate travel could be available within a few weeks. 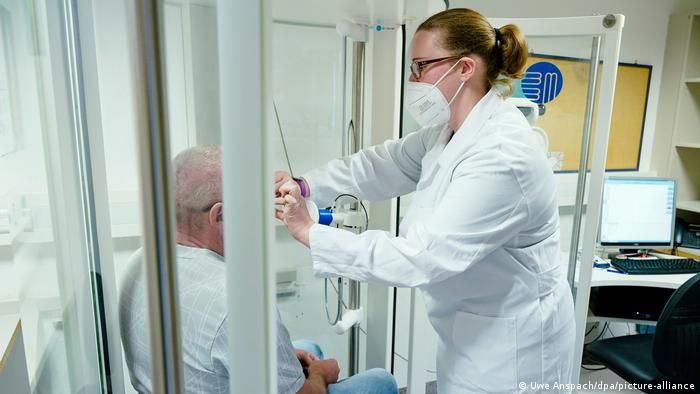 Spahn said that despite the number of infections falling, he urged the public to remain cautious and to abide by regulations.

"Every week that the infection numbers fall increases the chances of a good summer," he said. But, "we must be pragmatic and patient."

He called on people to keep adhering to regulations, such as maintaining distance and limiting group size. He said the prioritization scheme for vaccinations would be dropped on June 7 as planned, but that "not everyone can be vaccinated straightaway."

"Let us use the summer and weaken the virus outbreak as much as possible before winter," he urged. "We must not let the virus get the upper hand."

What about the vaccination passport?

Spahn also urged patience on rollout of a digital vaccination pass. In the meantime, however, people will be issued paper vaccine certificates that should function much like the yellow fever certificate required for traveling to certain countries.

"If we achieve a QR code concept across the EU, which is recognized as a vaccine passport, it would be a world-first. These things take time," he said.

He said he would involve doctors and pharmacists into the digitalization process.

European Union member states and the European Parliament agreed on the practicalities of the certificate on Thursday. Spahn said it should be ready by the end of June.

How is the vaccine rollout going?

Everyone should have the opportunity for a vaccine by the end of September.

Wieler said the vaccination campaign was moving forward and that surveys showed a very high acceptance rate among the public.

For herd immunity, at least 80% of the population should get vaccinated or have recovered from the virus, Wieler said.

Once vaccines for children are fully approved, inoculation will remain optional and up to the parents. However, Wieler noted that  children are also susceptible to serious COVID infections causing hospitalization and death, as well as long COVID. Therefore, he is recommending vaccinations for children as well.

He said with children heavily affected by the lockdowns, infections will also limit their ability to go to school.

Information on long COVID among children is still sparse, but more definitive data should come soon.

How Germany lost control of its coronavirus response

COVID: Back to 'normal' in Berlin's restaurants?

In some parts of Germany, restaurants can again open for business.

Whether with coronavirus figures filed by fax, or online forms for financial aid which then need to be printed out and signed, the pandemic has shown German government bodies lag behind European neighbors going digital.