The British government broke the law when discharging hospital patients and placing them in care homes without tests, the country's High Court has ruled. The WHO urged countries to ramp up testing. DW has the latest. 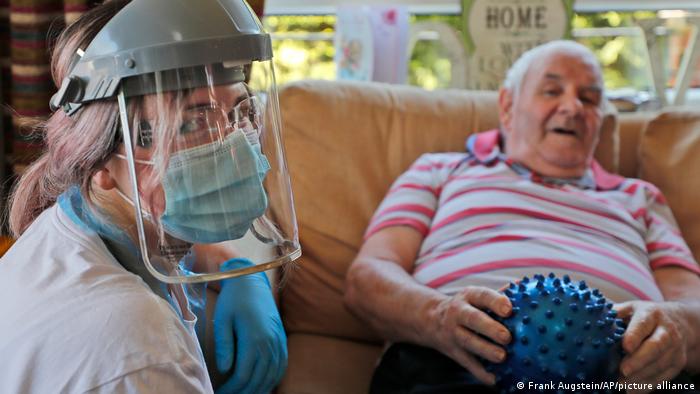 Early in the pandemic, the UK government discharged some hospital patients to care homes without first testing them for COVID

The British government acted unlawfully by discharging elderly and untested hospital patients into care homes in the early stages of the coronavirus pandemic, the UK High Court ruled on Wednesday.

The government's response to COVID as infections began to spread in early 2020 failed to take into account the risk to elderly and vulnerable residents, the judges in London ruled.

Prime Minister Boris Johnson's government has been repeatedly criticized for its slow response to the onset of the pandemic in Britain, as well as for flouting lockdown measures themselves.

Dr. Cathy Gardner, whose father died at the age of 88 in a care home in April 2020, said in a statement after the ruling: "My father, along with tens of thousands of other elderly and vulnerable people, tragically died in care homes in the first wave of the COVID-19 pandemic.

"I believed all along that my father and other residents of care homes were neglected and let down by the government."

The other claimant, Fay Harris, said outside court that Prime Minister Johnson should resign because of the government's "reckless and unlawful" policies.

"Their actions exposed many vulnerable people to a greater risk of death -- and many thousands did die," she told reporters.

"It has only increased the distress to me and many others that the government have not been honest and owned up to their mistakes."

The World Health Organization (WHO) has said a dramatic drop in testing is cause for serious concern as health authorities and the public become less aware of patterns of COVID transmission.

"As many countries reduce testing, WHO is receiving less and less information about transmission and sequencing," WHO Director-General Tedros Adhanom Ghebreysus told a press conference in Geneva.

"This makes us increasingly blind to patterns of transmission and evolution," he added.

"When it comes to a deadly virus, ignorance is not bliss ... This virus won't go away just because countries stop looking for it," Tedros said.

WHO said it was notified of just over 15,000 deaths last week, the lowest weekly total since March 2020.

WHO added that while it welcomed the trend, it was concerned that reduced testing was not accurately reflecting the presence of coronavirus.

Bill Rodriguez, chief executive of FIND, a global alliance for diagnostics, said many governments have simply stopped looking for the virus, and that testing rates have plummeted by 70% to 90% worldwide.

"We have an unprecedented ability to know what is happening," Rodriguez said. "And yet today because testing has been the first casualty of a global decision to let down our guard, we're becoming blind to what is happening with this virus," he added.

Tedros Ghebreyesus: Coronavirus does not go away because countries stop looking for it

German pharmaceutical company BioNTech and US partner Pfizer filed an application Tuesday with the US Food and Drug Administration (FDA) for an emergency approval of a booster vaccine for children aged between five and 11.

They are also expected to submit applications for approval for their COVID vaccine to other global regulatory agencies like the European Medicines Agency.

US Vice President Kamala Harris tested positive for COVID-19 on Tuesday, but is not showing any symptoms so far, a spokesperson said.

Harris has not been in contact with the either President Joe Biden or First Lady Jill Biden due to differing schedules, Harris's press secretary said. Harris has also taken Paxlovid, Pfizer's COVID-19 antiviral pill.

The Biden administration on Tuesday announced it was taking steps to expand the availability of Paxlovid so doctors could prescribe the pill to those who needed it without worrying about falling short of supplies.

Even though cases have been falling overall, infections have risen in some parts of the US because of the spread of sub variant of the omicron strain, called BA.2.

Mexico said Tuesday it was considering coronavirus as an endemic, rather than a pandemic, because COVID rates were falling and its impact has more manageable. Death rates have also fallen sharply.

"It is now retreating almost completely," President Andres Manuel Lopez Obrador said, referring to the virus. But that may be because Mexico, which was never particularly big on testing, is screening fewer people now. Mexico has recorded nearly 325,000 confirmed deaths from the virus, but experts say the actual death toll is higher.

COVID-19 and the importance of numbers

Authorities in the Chinese city of Shanghai said Wednesday they would begin new rounds of COVID testing over the next few days to determine neighborhoods with high or low risk of infection.

The aim would be to grant people some measure of freedom of movement in neighborhoods that were to declared to have achieved "societal zero COVID."

The phrase, used by Chinese health authorities, refers to when new positive cases are  discovered in people who are already under surveilliance and there's no COVID transmission at the community level. China reported 14,222 new cases on Wednesday, with most of them being asymptomatic infections.

A New Zealand court said Wednesday that the country's govermment had failed to take into account people's desire to return home when it tightened borders to contain an outbreak of COVID infections last year, ruling it to be unlawful.

The government had acted "unlawfully, unreasonably and in breach of the Bill of Rights that states every New Zealand citizen has  \the right to enter New Zealand."

Justice Jullian Mallon delivered the ruling in a 140-page written decision and said that while the government's decision to tighten its borders was important to contain COVID, it fell short of taking people's personal circumstances into sufficient consideration. She argued that some people were also traumatized by their failed attempts to return home.

Germany reported 136,798 new COVID cases and 304 deaths on Wednesday, according to the Robert Koch Institute for infectious diseases. The total number of cases now stands at 24,337,394 and deaths at 134,489.