The coronavirus outbreak has revealed cracks in the China-Africa dynamic. Gone are the days of Chinese big loans and major borrowing. Beijing's relationship with its African partners is changing, experts say. 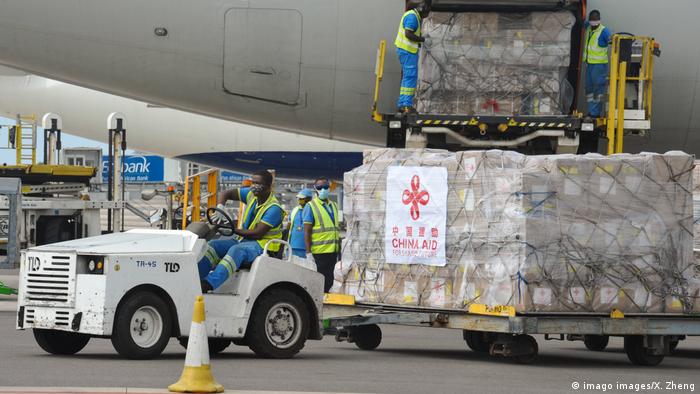 It has been a very bumpy year for China-Africa relations so far. While the Chinese have been quick to provide aid and support African nations during the ongoing COVID-19 pandemic, the outbreak has also highlighted aspects of Beijing's partnerships with African countries that aren't working.

China's massive lending to countries in Africa may no longer be tenable. Its economy is faltering as unemployment rises and the risk of bankruptcy for businesses increases. Experts expect the Chinese economy to continue struggling. So African leaders may not have Beijing's deep pockets to turn to amid the ongoing crisis.

Meanwhile, the coronavirus outbreak has also revealed the lack of understanding between ordinary Chinese people and Africans. In April, Beijing came under widespread criticism for an inadequate response to the incidents of racism and discrimination of Africans in Guangzhou. Several African ambassadors condemned the incidents and put pressure on the Chinese government to respond.

In May, three Chinese citizens were murdered in the Zambian capital, Lusaka. One of the victims was the wife of the owner of a factory in which their bodies were dragged before it was torched. The murders came after Lusaka's mayor posted a video on Facebook in which he confronts a factory owner about keeping his workers in a plant and not allowing them to go home amid the COVID-19 pandemic.

But despite many negative headlines, China looks like it could still benefit from the ongoing pandemic in Africa. Beijing was the first of the continent's partners to get the coronavirus outbreak under control, and that's not its only advantage.

"China is in a unique position, compared to say, Europeans or Americans because they have a large migrant population, an established business community," says Eric Olander, managing editor of The China-Africa Project website and podcast.

An estimated $280 million (€248 million) of coronavirus crisis-related aid and support has come from China. A big part of it is from private individuals and the businesses community.

"There is a diaspora that's there. They are stepping up," Olander notes.

Around 1 million Chinese people live in Africa, probably making it the continent's largest non-African migrant population. Despite revealing cracks in the China-Africa relation, the ongoing pandemic is also showing the positive in Beijing's engagement on the continent. The level of private engagement linked to COVID-19 relief in recent months shows that something may be shifting.

It is hardly a surprise that official Chinese aid has been outstripped by private donations in the COVID-19 response. Beijing has already pumped significant amounts of cash in Africa. It is now the continent's largest bilateral creditor, accounting for around 20% of external debt on the continent, according to several estimates. So while the Chinese economy falters, private involvement in the Chinese response may be a sign of what's to come.

"My feeling is that there'll actually be a bigger drive, and in particular not to loans, but to investment," she says.

That's mainly because "growth within China will be constrained for a very long time," she explains.

With Chinese investors are increasingly facing more restrictions in the US and Europe, their appetite to invest elsewhere may also increase. That was the case in 2018 for instance when more firms from China invested in African tech startups — their interest in the continent rose following more scrutiny in the US market.

Still, the relationship between Beijing and its African partners is largely unequal. The trade deficit is staggering, and the incidents in Guangzhou were also a sign of the dynamic. African traders do not have the same economic power and access to the market that Chinese migrants have on the continent.

"What we need to see is a shift from both the Chinese and African sides, in not just having a political relationship, but also an economic relationship, which is mutually beneficial," says Hannah Ryder of Development Reimagined.

And therein lies a problem. Most African countries haven't developed strategies to attract Chinese investment, experts like Ryder note. A good example would be the tourism campaigns African countries have in China — they are no different from the ones in Europe. And the same applies to African exports. So that needs to change.

"We need to actually have a real strategy for engaging with China," says Ryder. "We have to prioritize what we want to get out of that relationship."