In many countries, fewer COVID-19 patients are dying than in earlier weeks of the pandemic. But scientific experts say we should be looking at all-cause death numbers instead — they tell a very different story. 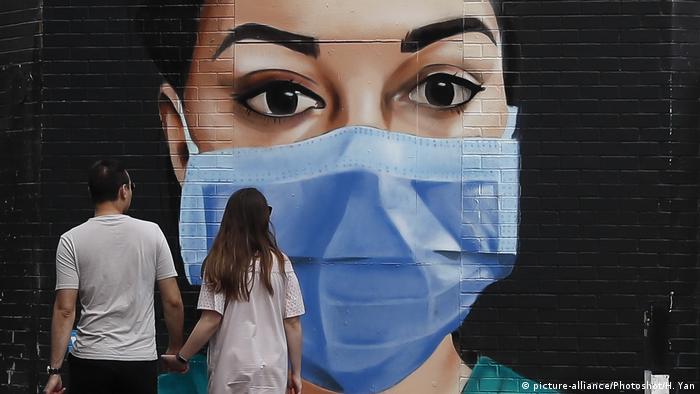 Some countries, like Spain, carry out post-mortem COVID-19 tests, while in others like Germany, the UK, or Turkey it not a common practice.

Belgium, for example, counts all coronavirus deaths outside hospitals in its daily statistics: This means the country includes people suspected of having died of coronavirus, without a confirmed positive test result, whereas countries like Italy only count deaths in hospitals. Spain only recently started to count non-hospitalized, coronavirus-related deaths from some regions.

The meaning of all-cause death numbers

Why is the all-cause death number relevant? There are a few essential lessons we can learn from all-cause death data. According to many scientific experts, it is the only unbiased information we can trust to measure the real impact of the pandemic, and create policies to minimize its effects.

The number of people dying of COVID-19 is huge, but it still is not the leading cause of death in many countries. People are more reluctant to go to hospitals because they fear contagion, or simply do not want to burden the health system further. However, a scenario in which the leading causes of death, such as heart disease or cancer, increase by even 5% could translate into hundreds of thousands of people.

David Spiegelhalter, Professor of Public Understanding of Risk from the University of Cambridge, notes the differences in each country: "I would say the all-cause death number is the really unbiased measure of the impact of this epidemic. And it's the one I look up far more closely," he told DW.

Data collected by DW both on all-cause deaths and COVID-19 deaths shows: Thousands more people are dying directly or indirectly due to COVID-19 than the official numbers suggest. DW's data analysis focused on Spain, England and Wales, but indicates a pattern present in other countries too.

Before we dive into the details of why there are big numbers of excess deaths, and what we can learn from them, let's have a closer look at some examples.

If overall death rates in a given timeframe and place went up but COVID-19 death rates did not, why did more people die? Amparo Larrauri, the leading investigator at Spain's Epidemiology and Public Health Center, told DW that there are several possible reasons. "The excess mortality may be due in part to deaths from COVID-19 that have not been identified," she said, while pointing out other possible factors such as "early mortality."

Early mortality affects people with a short remaining life expectancy and a major underlying disease, mainly the elderly. If someone in this category gets infected with COVID-19, he or she is likely to clinically decompensate rapidly. This is thus a death that occurs earlier than expected, whose cause is the underlying disease — but the virus precipitates the death.

That is why some experts in demographics expect much lower death rates in the post-COVID-19 era, since many people are currently dying earlier than expected.

According to Spiegelhalter, "early mortality" alone is not enough to explain the extra deaths. There are other important reasons, he said.

More people are dying outside of hospitals

England's Office for National Statistics publishes the number of deaths every week. This data is helpful in examining the whole picture of the pandemic's impact. "I think the crucial thing we see here is that there's a move from people dying in hospitals to people dying at homes and care homes," Spiegelhalter said.

For example, the latest published data shows that from April 18 to 24, there is a 373% increase in the number of people who died in care homes compared to the last 5 years. Only 35% of them are labeled as COVID-19. "Some of them may have COVID-19, but others simply are people who didn't go to a hospital," explained Spiegelhalter.

Data also shows that 36% of the people who died that week died in care homes, compared to the historical average for that week, 22%. Meanwhile, deaths in hospitals decreased from 50% to 37%. "Evidence shows that people are very anxious about going to a hospital, either to avoid saturation or possible contagion," Spiegelhalter added.

This is more worrying than unrecorded COVID-19 deaths, explained the professor. "This is what we might call 'collateral damage' that is being caused by the disruption in society, and the healthcare system. Meaning that people are not using the health service in a way that would otherwise have prevented their death."

"Numbers suggest that there are many people who might not have died, and who are dying at home or in care homes. And this is reflected by a big reduction in hospital admissions of non-COVID-19 causes."

There are multiple reasons for this variation: Not performing post-mortem tests, counting the COVID-19 numbers only from hospitals, differences in testing capacities, reliability of numbers in the midst of a pandemic and a lack of standardization in the descriptions and procedures in different countries.

And then there are less transparent countries with governments pursuing a political agenda to depict the situation as better than it is and gain political leverage.

Many countries' health authorities are not publishing these all-cause data at all, or publishing with a certain delay, among them Germany. There are different reasons for each country. DW asked the statistics and IT services institute of the German state of North Rhine-Westphalia, which was an early hotspot of coronavirus infection and still is one of the most affected states. The officials said there was never a need to collect the data daily; now they are trying hard but having difficulties catching up. This is partly because of Germany's federal system of 16 states, and partly because the pandemic disrupted standard procedures.

According to the German news magazine ZEIT, from the end of March to the beginning of April 2020, slightly more people died in Germany than on average over the previous four years, excepting 2018, which had relatively high numbers due to a wave of influenza.

What about the economic crisis caused by the pandemic?

According to a joint study from Harvard T.H. Chan School of Public Health, Imperial College London, and Oxford University, the economic crisis of 2008-2010, and the rise in unemployment that accompanied it, was associated with more than 260,000 excess cancer-related deaths — many considered treatable — in middle- and high-income countries alone.

Many countries worldwide are now struggling with the economic implications of the pandemic, along with the rising unemployment. That is why it is expected that the stress of the pandemic will likely precipitate increased smoking, alcohol consumption, and drug use, as well as rising suicide rates.

Reliable information about how many of the excess deaths were or were not caused by COVID-19 may not be available for months or years. However, the all-cause death numbers already indicate that the ultimate death toll from the pandemic will be much higher around the globe than is currently reported.

Data behind this analysis

China has imposed a COVID lockdown on half of its largest city and financial capital, Shanghai. Meanwhile, Israeli PM Bennett has tested positive for COVID-19. Follow DW for the latest.

The Eurostat agency recorded an increase in excess mortality in 2020 compared to the same period in 2016 to 2019. The deaths reached new peaks in November, with eastern Europe particularly hard-hit.

What's the COVID situation in Europe as it enters its second pandemic winter? 22.10.2021