Coronavirus: Why are the death rates different? | Science | In-depth reporting on science and technology | DW | 27.03.2020

Many of us are tracking the daily coronavirus infection and death rates. You may have noticed that the death rates differ greatly from country to country. Here are some of the main reasons. 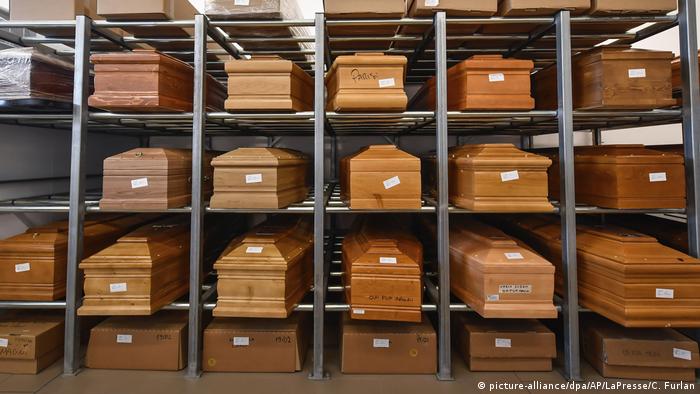 Italy is experiencing one of the highest death rates from coronavirus

The World Health Organization (WHO) says various factors can contribute to such discrepancies.

First, there's the "population pyramid" or distribution of age and gender in a given country. Then there's the medical or healthcare capacities of each country. And last but not least, the number of people who are tested for coronavirus, because knowing and recording exactly who has been infected will directly influence the validity of any published figures.

In some countries, supplementary tests are carried out on the dead. And that would influence the statistics as well.

An economist, Andreas Backhaus, has tweeted that the average age of coronavirus cases in Italy was 63 years and in Germany 45 years of age (at the time of his post).

That may be explained if, in Italy, fewer younger people, who presented with mild symptoms, were tested for coronavirus than in Germany. Those cases would not appear in the number of overall infections. And that would influence the death rate, because only the severely ill would be visible.

In Italy, a report in the national newspaper, Corriere della Sera, suggests there may be a high number of unreported cases in the country, both among infections and those people who are dying following an infection.

In South Korea, it's the exact opposite. Authorities there have tested significantly more people for Covid-19 than other countries. And the estimated death rate in South Korea is extremely low.

Read more:Corona confusion: How to make sense of the numbers and terminology

The average age of a population can also play a role here. Older people are at high risk of contracting the coronavirus as they often have pre-existing health conditions.

That can make it easier for a virus to overcome a person's immune system — certainly easier than is with otherwise healthy people, who are often also young. Our immune defences weaken as we get older, our immune systems become less effective, and that puts us at greater risk of infectious diseases.

But that doesn't fully explain the significant differences between Germany and Italy because the population pyramid in both countries is similar. In 2018, the median age in Germany was 46.0 years and in Italy it was 46.3 years.

This factor may play a larger role for countries in Sub-Saharan Africa, where median ages are lower. That's true for Chad, for example, where the median age is 16 years.

Timing of the epidemic

The course of the epidemic could provide a further explanation for the difference in death rates.

In those countries that have been especially hard-hit by the outbreak — such as Italy and Spain — the epidemic appeared earlier than in Germany.

And as it takes time from the first moment of infection to the point at which a severely ill patient dies, the death rate among confirmed cases is likely to rise as we get to the end of the epidemic.

Several scientists have said that Germany has yet to reach its own peak of the epidemic, and once it does, we could see higher rates of mortality here as well.

The health of a healthcare system

The most important question, however, is how well a country's healthcare system is prepared for an outbreak, such as the coronavirus, and whether it can succeed in "flattening the curve." The idea here is to reduce the likelihood of any sudden spikes in the infection and death rates by keeping numbers stable as a virus spreads through a population.

It's possible, for instance, to reduce the number of deaths of severely ill coronavirus patients with the help of respirators, or ventilator machines. So, it's important that there are enough hospital beds in intensive care and access to such machines.

If there are too few intensive care beds and ventilators for artificial respiration, it's likely that those patients who don't get that care will be at higher risk of dying.

And on that point alone, there are huge differences between Germany and Italy. The Italian population is about 60 million people. At the start of the epidemic there were about 5000 beds in intensive care there.

Germany has a population of about 80 million and 28,000 beds in intensive care. And it's said that the number of intensive care beds will be doubled soon.

It's notable, though, that South Korea, which seems to have slowed the spread of Covid-19 with mass testing and strict isolation measures, has 10.6 intensive care beds per 100,000 people.

South Korea has enforced strict quarantine rules and kept the curve flat from early on. The country has only 10,000 cases of infection. Italy has eight times as many and Spain six times as many infections - at this point.

As long as the pandemic continues, it seems these huge differences in numbers of infections and death rates will appear from country to country and continent to continent. Only once the worst of it has passed, will it be possible to generate reasonably reliable statistics.

More than two-thirds of Germans are fully vaccinated against COVID-19. Nevertheless, significantly more people are currently dying due to the virus than they did in autumn 2020. Why is this happening?

Two years into the pandemic, researchers are still working out what causes long COVID, why some get it and some don't and what to do about it.