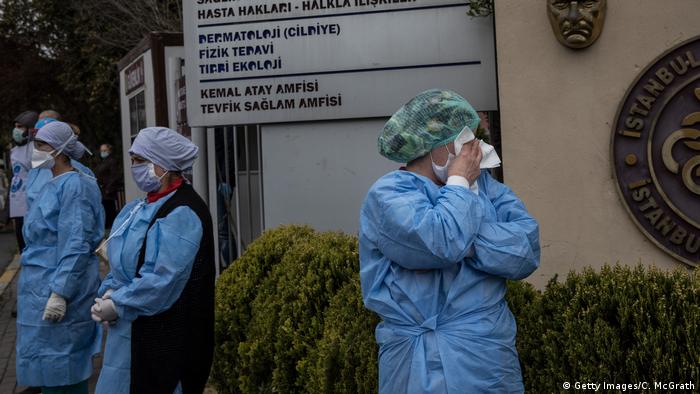 Containing the spread of the novel coronavirus and saving lives requires governments to be transparent. This includes letting journalists and medical professionals do their jobs without being intimidated. We rely on a free press to hold governments accountable, but this is not possible in countries with intransigent leaders who regularly imprison journalists for their reporting. This is especially true in Turkey, which has one of the highest incarceration rates for journalists worldwide. Without transparency and freedom of the press, the true scale of the epidemic remains obscured and increases the threat to public health.

The Turkish government's central laboratory in Ankara reported zero cases prior to March 11. Turkey is an international transit hub, with a population of over 80 million people, that sits squarely between — and connects — Europe and Asia.

In the first weeks of March, there were many reports of travelers returning home from Turkey and testing positive for the virus. Given that the disease had spread to 114 countries worldwide, many of which border Turkey, the proposition that it was not present in Turkey was becoming absurd. This called into question the veracity of Turkey's central laboratory's reporting.

On March 13, hundreds of Turkish citizens returning from a pilgrimage to Mecca, Saudi Arabia, were quarantined in student dorms, displacing hundreds of students in the middle of the night without alternative arrangements. Thousands more pilgrims who arrived before March 13 went through screenings that only involved walking past a thermal-sensing camera. They were then told to isolate at home. The government's claims about the preventative measures were called into question when some mayors and representatives from the governing AKP party posted photos of themselves on Twitter, visiting with a group of pilgrims. This made it clear that the preventative measures declared by the government were being disregarded by the party's own officials. The pictures were removed after this contradiction was brought to public attention.

On March 18, Gule Cinar, a doctor at Ankara University Faculty of Medicine, was secretly recorded in a staff meeting informing her colleagues that the case numbers may have exceeded thousands as a result of the unmonitored release of pilgrims. The Turkish government opened an investigation into Dr. Cinar when the video was leaked on Twitter, and the medical school published a statement saying that Dr. Cinar would issue a public apology, which she subsequently did.

On March 26, the Turkish Medical Association (TTB) announced that due to insufficient test kit availability, high false-negative rates and long delays in getting test results, doctors relied on CT scans to decide whether to start with treatment. As a result, many COVID-19 deaths were counted as casualties of "normal death" since the patients were never confirmed as having had the virus.

On March 29, after Veli Agbaba of the opposition CHP party pointed out a discrepancy in the number of COVID-19 related deaths, stating that the official number declared for all of Turkey was less than Istanbul alone on the same day, Istanbul municipality's online reporting was immediately shut down.

No mercy for imprisoned journalists

Seeing as the efforts to contain the flow of information have been greater than those to contain the epidemic itself, the way Turkey has been dealing with the outbreak is extremely worrisome. Even when the official numbers are taken at face value, Turkey's current rise in the number of cases is higher than that of Italy and just below Spain, when normalized by the population rate.

While Turkey has announced that it will release prisoners convicted of premeditated murder or organized crime due to outbreak risk, these merciful measures have not been extended to journalists or to political prisoners.

Considering that accurate and timely information is one of the most effective tools for fighting a pandemic, governmental transparency and the protection of freedom of speech are more important than ever.

Miray Erbey is a researcher at the Max Planck Institute for Human Cognitive and Brain Sciences in Leipzig and an independent journalist.

In January 1961, a law came into effect defining the rights of journalists in Turkey. Though President Recep Tayyip Erdogan says the media are on the right track in Turkey, his government has clamped down on reporters. (13.01.2020)

Turkey's Pelican group: A state within a state

Germany: Antisemitic protesters will feel 'full force' of the law 0m ago

Coronavirus digest: CDC recommends masks for US schools 2h ago